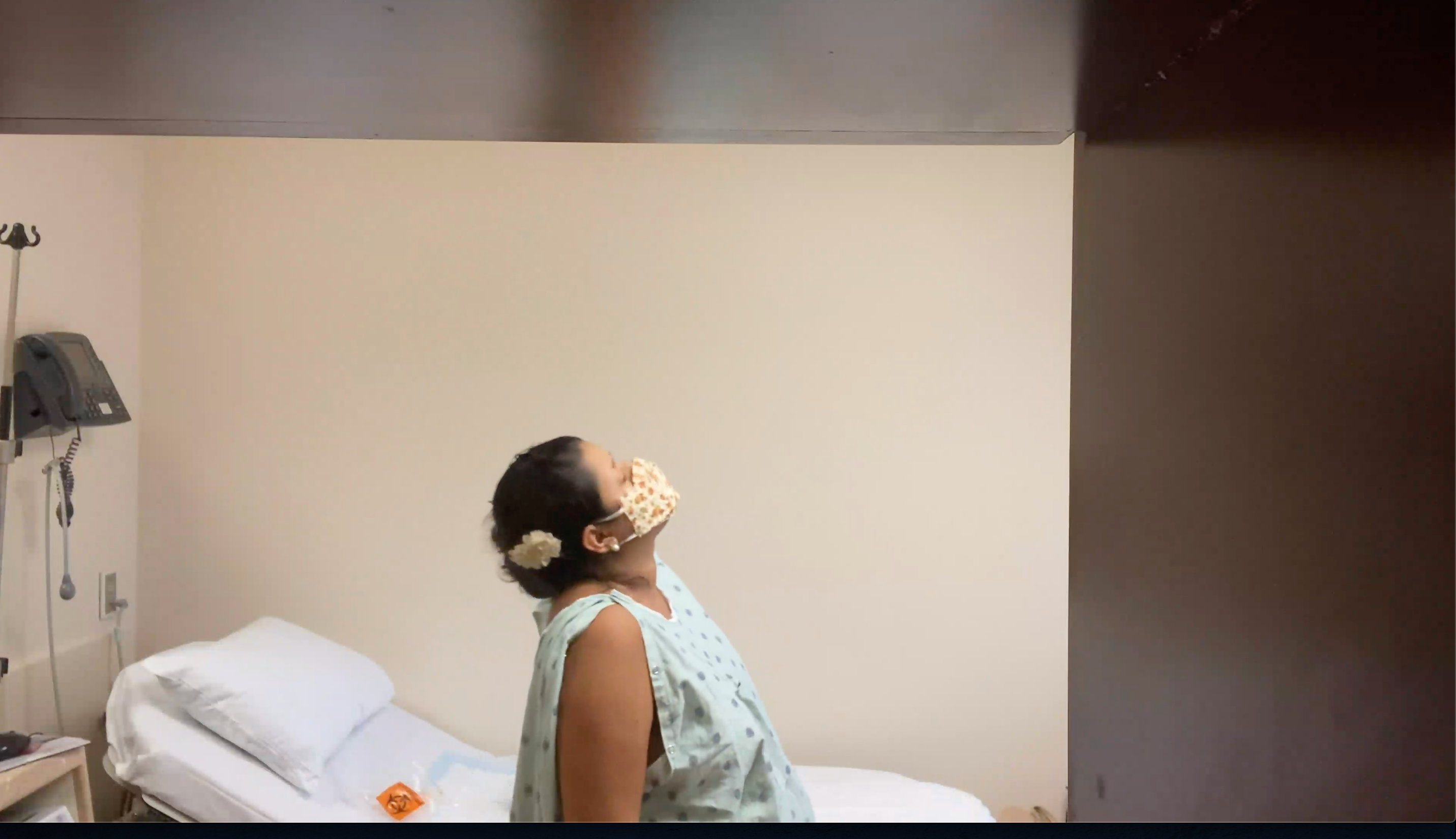 The question: In this time of coronavirus, when creativity is under forced constraint because of social distancing and other restrictions, how can you take that concept and use it as an advantage, if you must, to make art?

The answer: Make films that reveal slices of life in Miami during quarantine.

Oolite Arts selected 12 Miami filmmakers and gave each $1,000 and two weeks to create works, up to three minutes long, using the limited resources of life amid COVID-19. The result was the Close Quarters Commissions, an online, micro-film festival that will be shown at 7 p.m. July 15.

“We wanted to use film to demonstrate what could be accomplished at this moment with the onset of COVID-19, to say nothing of the protests that followed,” says Jason Fitzroy Jeffers, Oolite’s cinematic arts manager. “We wanted to encourage filmmakers to keep working and help them to continue, even if it meant them creating from the confines of their home.”

After all, he adds, from its inception, the Cinematic Arts Program at Oolite Arts “has been about elevating Miami’s film community by tapping into its resourcefulness.”

Miami documentary filmmaker Christopher Lopez remembers receiving the Oolite Arts email asking if he wanted to be part of Close Quarters. At the time, Lopez says he was still going out and trying to film documentaries. Then he realized, as the quarantine was intensifying, that being out and about filming probably wasn’t going to be sustainable.

“Just before Close Quarters, I was exploring this notion of making movies while at home. It all lined up when Oolite contacted me,” says Lopez, who had been fascinated by the 2018 Sundance winning movie “Searching,” the Aneesh Chaganty thriller that is told entirely on a computer screen. 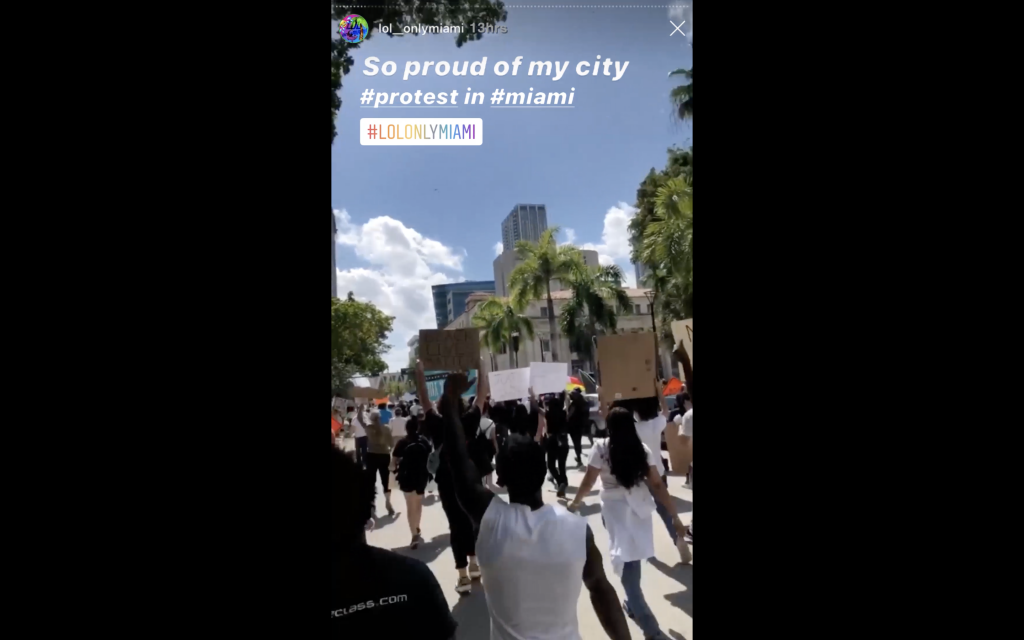 Lopez’s microfilm, “LOL_onlymiami,” records 24 hours in the life of a Miami social media Instagram account during the first weekend of the Black Lives Matter protests. It takes place on a Saturday in the midst of the COVID-19 pandemic while peaceful demonstrations in downtown Miami take a turn for the worst. Police cars burn, protesters hurl objects at police, and police retaliate with tear gas and rubber bullets.

“Chris definitely taps into the feeling of the moment,” Jeffers says

Lopez says he realized that some of the best footage wasn’t on television news, but rather on social media. He became obsessed with getting everything he could download from social media accounts and stayed awake for 48 hours to make sure he didn’t miss a thing. He says he snagged 100 to 150 social media moments, everything from looters breaking into Bayside Marketplace to store owners protecting their stores with AK-47s.

“I started viewing my job as an archivist,” he says.

He was under a deadline because the average Instagram content lifespan is 48 hours. His microfilm captures the essence of the moment. “Social media was this source of news, but it was also this really absurd form of gross entertainment,” says Lopez.

He noted the odd juxtaposition: “There are these stories coming up on social about the protests, and then there are ads in between for face masks, and then someone else posting about a new tea that they made or showing workouts at a gym. It was very dystopian.”

Another powerful commission is Pamela Longsword’s “Kairi During COVID,” a three-minute look as the filmmaker gives birth during the pandemic.

Originally envisioned as a personal video diary, the piece ends up capturing the trials and tribulations of giving birth during the COVID-19 crisis, showing “how integrated this whole process has become into the intimacy of a person’s life,” she says.

Longsword wanted the film to include every bit of the hospital experience. One challenge she had to consider: “How am I going to direct during labor?” 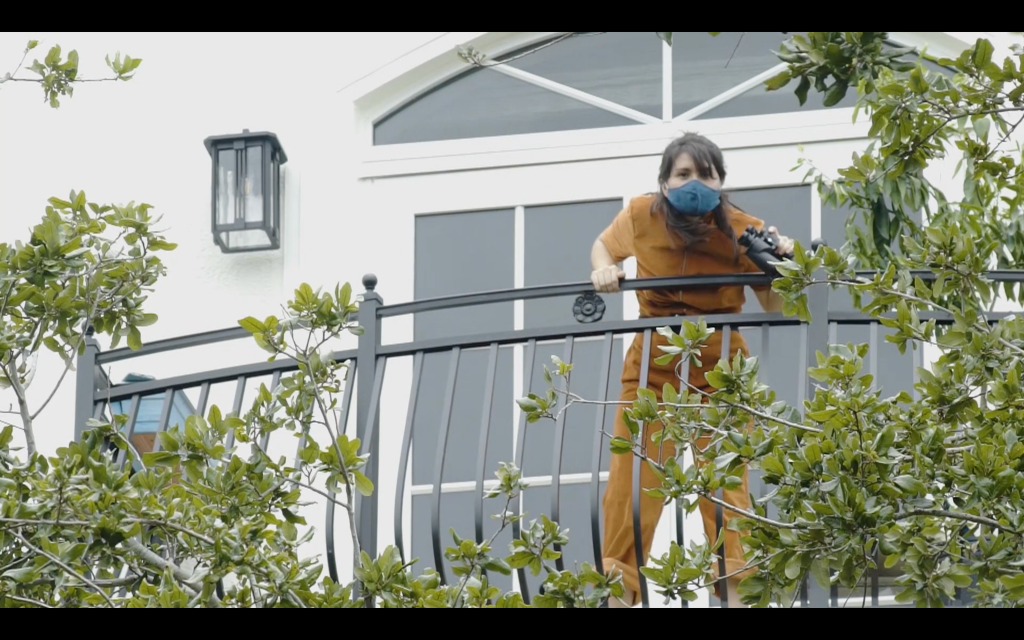 She told her partner, Thiago Souza, who would be doing the shooting, that he had to keep rolling no matter what happened – even if it was just for audio, she says.

A moment etched in her memory was when she was given her baby to hold for the first time: “Seeing my daughter and not being able to kiss her because there was a mask on my face will forever affect me,” she says. “Now I don’t only have the memory of living it; I have documentation of it.”

A nurse in the shot eventually pulls her mask down, albeit in a sterile, down-to-business way, so she can kiss the baby.

There are other times documented in the film that she treasures – some poignantly intimate. In one scene, in the stark hospital bathroom, Souza bends down to wipe her blood with a white towel, the residuals of her emergency Cesarean section. In the next scene, the new father bonds with his baby as he feeds Kairi a bottle in a low-lit room.

The coldness of COVID-19 comes through what’s supposed to be one of the most joyous times in life. For example, she says, “the hospital staff is showing me how to breastfeed and feed the baby and they are all wearing masks and gloves.”

She says what she learned about her craft through this experience is to “capture life’s moments as natural as possible.”

Other films in the Close Quarters Commissions include:

Avram Dodson: “Mommy, Will You Play With Me?”

Together, the films have special meaning.

“One thing we couldn’t predict was how viewing all the films together would really chart the emotional landscape of the moment we are living in right now,” Jeffers says. “Watching them together really churns through the confusion of all of that. And, as good as any individual film is in the program, I think together they are greater than the sum of their parts.”

When: 7 p.m. July 15, followed by a question-and-answer session with the filmmakers, moderated by Jason Fitzroy Jeffers

Where: Online; RSVP at Oolitearts.org/closequarters