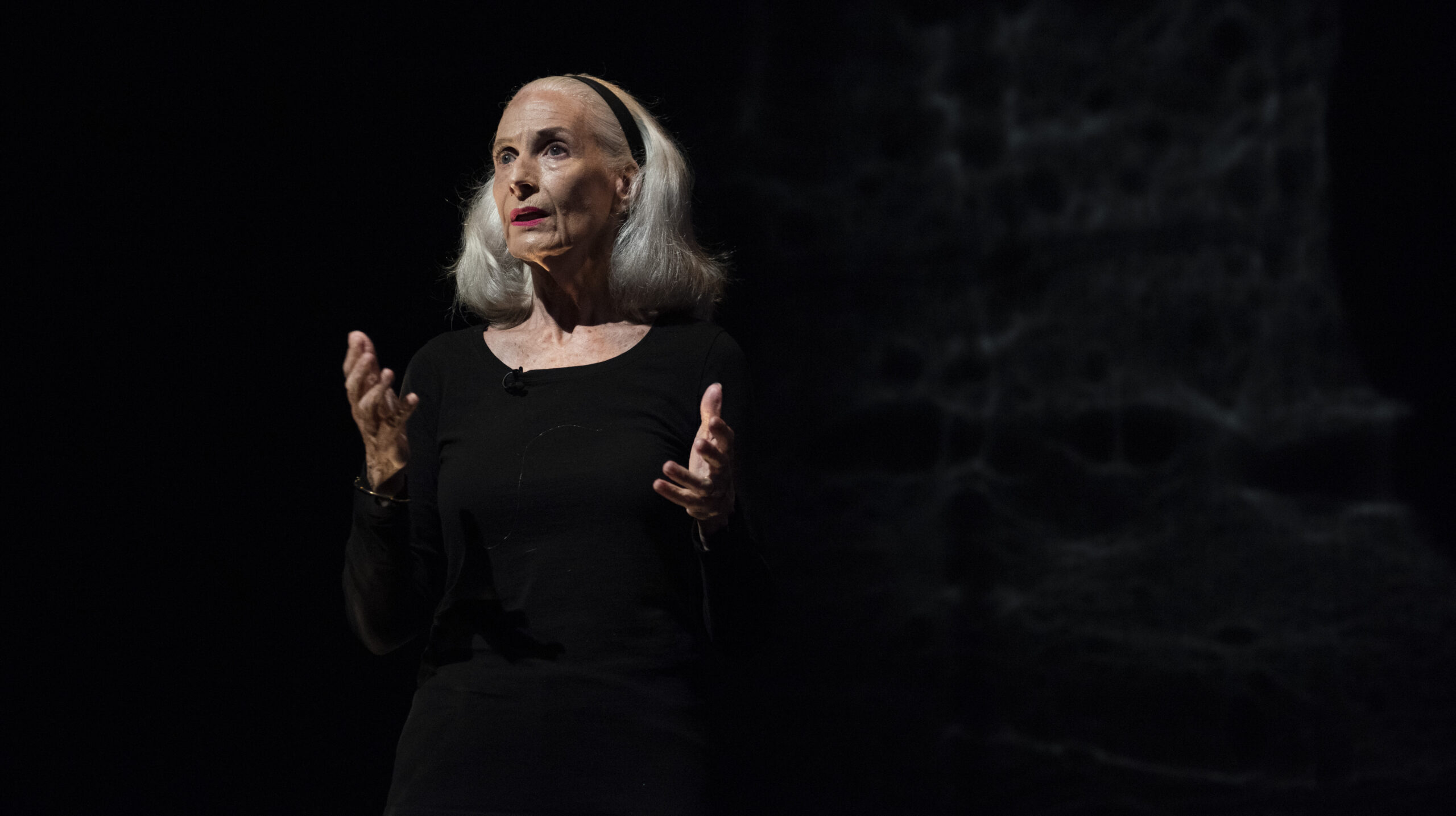 Sara Morsey as author Joan Didion in GableStage’s “The Year of Magical Thinking” at the Biltmore Hotel, Coral Gables, through June 26. (Photo courtesy of Magnus Stark)

Perhaps you have read Joan Didion’s “The Year of Magical Thinking,” her 2005 memoir about the year following the sudden death of her husband John Gregory Dunne.  Maybe you’ve seen a production of her 2007 solo show on the subject, a piece that also explores the loss of the couple’s beloved only child.

But it’s safe to say that, even if you are familiar with Didion’s exploration of loss, profound grief, and gradual healing, you have never experienced the story in the way GableStage is now telling it.

Producing artistic director Bari Newport and her creative collaborators imagine Didion, here portrayed by Sara Morsey, speaking from inside a void – a void representing the magical thinking that helped carry her through her first year as a widow. From the reflective black floor to dark walls that become a canvas for the projection of abstract images, the space is a physical manifestation of the darkness that can afflict a survivor after a profound loss. 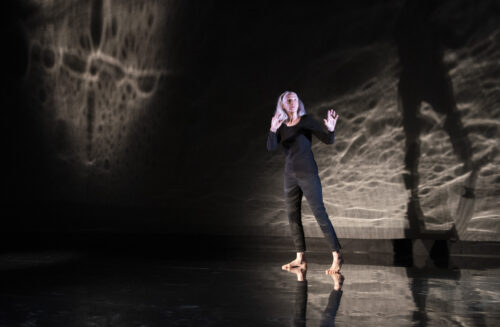 The dark palette, artfully pierced by Tony Galaska’s lighting, brings Morsey into sharp relief.  About the same age Didion was when Dunne died of a heart attack, Morse is slender and fit, the latter vital to staying on her feet for the play’s 100-minute running time.  She doesn’t much look or sound like the petite, reed-thin Didion, but that scarcely matters. The words, the reflections, the storytelling, the commonality of grief – those are the things that matter.

Costume designer Camilla Haith has Morsey dressed in black, from the headband that holds back the actor’s shoulder-length white hair to the simple shirt and pants she wears.  She walks the stage barefoot, and her expressive face and hands become even more powerful storytelling tools as they glow in light or recede into darkness.

Early on, she shares this observation from the memoir:  “Life changes fast. Life changes in the instant. You sit down to dinner and life as you know it ends…” 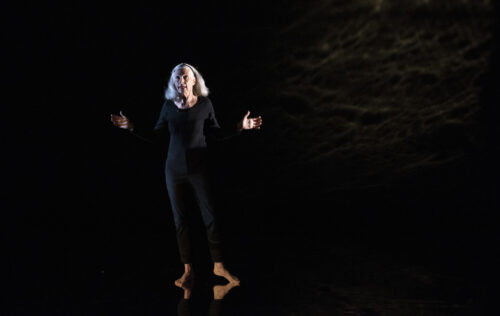 Sara Morsey in the one-person show, “The Year of Magical Thinking,” written by Joan Didion. (Photo courtesy of Magnus Stark)

Such insights are laced throughout the play, enriching Didion’s stories about her life with Dunne, her spouse of four decades, and daughter Quintana Roo, who died at 39.

Theirs was an uncommonly glamorous existence, one filled with books, magazine pieces, screenplays and acclaim, not to mention a host of famous friends (actor Katharine Ross, Didion says, taught Quintana to swim in her Malibu pool).

But what makes “The Year of Magical Thinking” speak to and connect with an audience are the common experiences of loss as expressed by an observant writer.

(Read the interview with Sara Morsey in the Artburstmiami.com preview here.)

In less than two years, the deep ongoing bonds of Didion’s life as a wife and mother ended.  She tried to cope with journalistic research, controlling what she could, engaging in magical thinking – which, at its worst, became a kind of obsessive vortex.  Slowly, so slowly, healing and acceptance happened, as they do.

Newport, who has been busy running and growing GableStage since directing the season-opening production of Arthur Miller’s “The Price,” underscores her range as a director with “The Year of Magical Thinking.” The roots of her creative approach are in the script, but she has interpreted the work in a highly original way.

Didion, who died in December at the age of 87, never came across as a showy dynamo.  Nor, deliberately, does Morsey.  She speaks in the confiding tones of a woman with a personal yet resonant story to tell.  Though the production requires real physical and mental stamina, her movement is generally contained and controlled.  Thanks in part to Galaska’s lighting, she appears to glow from within. 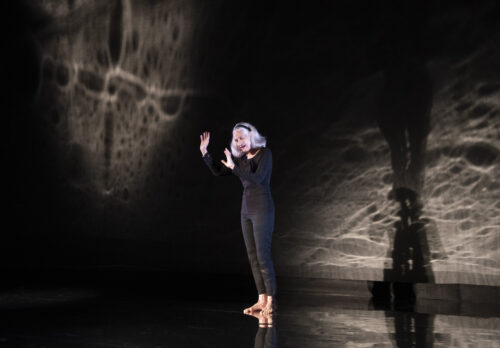 Although a solo show, “The Year of Magical Thinking” is a collaborative work of theater at GableStage. (Photo courtesy of Magnus Stark)

Newport’s bold interpretation of “The Year of Magical Thinking” becomes a collaborative work of theater art with the collective talents of Galaska, Haith, and the rest of the design team’s contributions.

Frank J. Oliva, scenic and projection designer, has created eerie patterns – something like water on a window or an X-ray view of something inside the body – that appear and vanish.  Matt Corey underscores the play with music and sound, muted enough so that Morsey can be heard.

Some may find GableStage’s version of the play too dark and stark as it adheres to Newport’s concept.  Not everything works as it should; at first, we see only a sliver of Morsey’s face, for instance.  The actor does an engaging job of guiding theatergoers through Didion’s journey, but perhaps once the daunting amount of text becomes ingrained, that engagement can deepen.

GableStage announced its 2022-2023 season and it’s a safe bet that the productions will be as eclectic as Newport’s choices for her second season at the helm.  But as “The Year of Magical Thinking” demonstrates, it’s likely she has only begun to explore the possibilities and potential of the much-admired company.

WHAT: “The Year of Magical Thinking” by Joan Didion