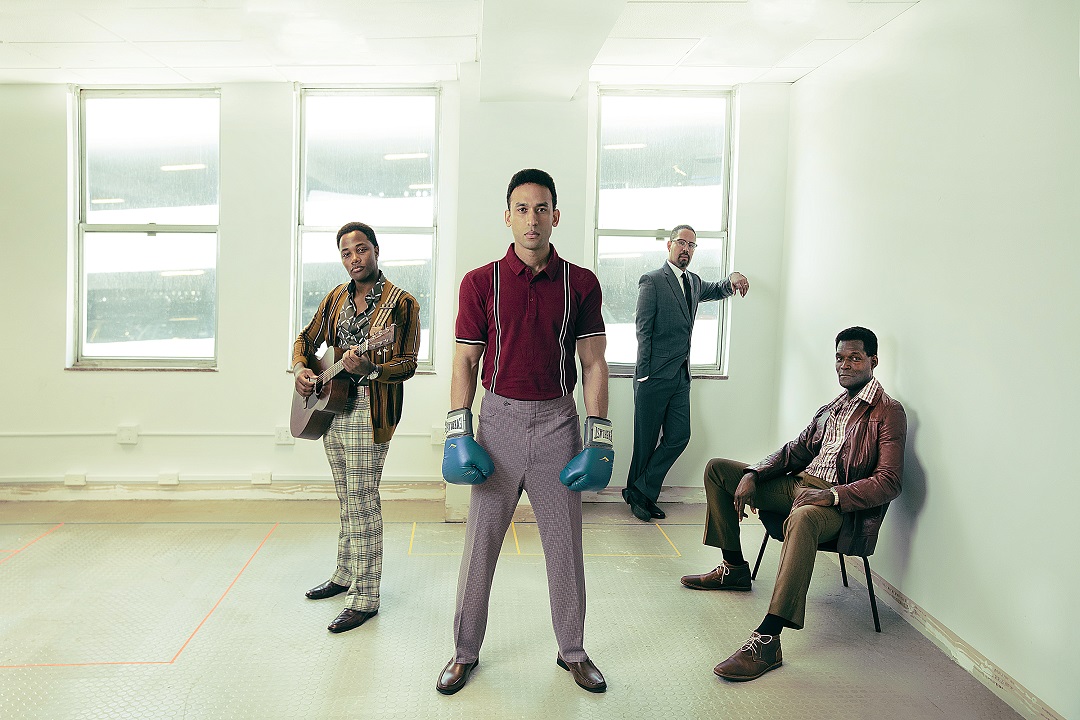 Imagination meets fact in the surprising-but-true “One Night in Miami,” the Kemp Powers play that will open Miami New Drama’s 2018-2019 season at Miami Beach’s Colony Theatre on Saturday.

And yes, that really happened, though like most people, director Carl Cofield had never heard about the gathering.

He started acting at the age of four and was enmeshed in South Florida’s arts scene thanks in part to his uncle Clarence Thomas, a successful film, TV and stage actor.  Cofield graduated from the first high school class at Miami’s New World School of the Arts, earned his BFA from the University of Miami, performed at regional theaters around the country and then segued into directing, earning a master’s degree while studying with Obie Award-winner Anne Bogart at Columbia University.

Yet as much as the Miami native knew about the region’s arts and history, he had never heard the story at the heart of “One Night in Miami.”

Cofield, who is making his hometown directing debut with the play, helmed a staged reading and then the drama’s award-winning world premiere in at a small Los Angeles theater in 2013.  He discovered that the L.A.-based Powers, who began his writing career as a journalist, “had a Ph.D.-level knowledge of each of the four men. We had a shared lexicon as black men of a certain age. We knew each other’s references and aesthetic. And we worked hard at honoring these men.”

Powers, a Howard University English major who transitioned from journalism into writing for theater and television, first found a reference to the post-fight night in Mike Marqusee’s 1999 book “Redemption Song: Muhammad Ali and the Spirit of the Sixties.”

He set about researching the evening in the lives of four men who had been heroes to him growing up, but he found it was “hard to get more than perfunctory information about what happened in the room. The next morning, Ali announced he had become a member of the Nation of Islam. There were factoids about that night – they ate vanilla ice cream – but not much else.”

Powers, whose 2004 book “The Shooting: A Memoir” details his Brooklyn childhood and his fatal accidental shooting of his best friend at the age of 14, felt after extensive research that he could write a play imagining the conversation among the four seemingly disparate men. But though both he and Cofield see the quartet as superheroes who embodied different methods of black male empowerment, the playwright didn’t want to deify them.

“You have to remember how old they were then. Cassius was 22. Jim was 28. Sam was 30. Malcolm was 39,” Powers notes. “The most famous and powerful men in the room that night were Sam Cooke and Jim Brown. So there was a different dynamic.”

“This is sort of like The Avengers,” Cofield says. “Each is a superstar in his own right, but there’s a kind of mythology with all of them together.”

The actors inhabiting those big personalities are Kieron J. Anthony, a University of Miami grad, as the young and already brash Clay; Jason Delane, who appeared in the world premiere and a subsequent production at the Denver Center, as Malcolm X; Esau Pritchett, who appeared in a production of the play at Baltimore’s Center Stage, as Brown; and Grammy-winning actor-singer Leon Thomas III as Cooke.

What Cofield has been working with the actors to achieve is “not an impersonation of iconic men. They need to find the essence of what these men had, be true to their arguments.”

As actors do, each has taken a deep dive into the life of the man he’s portraying, reading books and articles, watching documentaries, all to embody resonant historical figures whose impact is still felt in this roiling 21st century.

Of the four, only Brown is still alive, and the gridiron warrior who refused to stay silent forged a path for activist-athletes like Colin Kaepernick, as did Ali. The fiery Malcolm X, after breaking with the Nation of Islam, would be assassinated by three of his former brethren barely a year after Ali’s title fight. Cooke, the great artist-entrepreneur who had his own label and retained the rights to his master recordings and publishing, was shot to death under mysterious circumstances by a Los Angeles motel manager in December 1964.  Ali, deeply influential as a superb athlete, outspoken activist and man of faith, died in June 2016.

Anthony, who ran track and was a pre-med major at UM before committing to acting at the Atlantic Theater Company’s acting school in Manhattan, says of the research for his role as Ali, “I focused on his cadence, his charisma, his playfulness, the way he commanded a room – not on the TV Ali.”

For the actor, “One Night in Miami” asks, “What do you really represent as a black man in America? Are you just there to entertain? Do you speak up when you feel there’s an injustice?”

Though the cast is staying at a hotel near the Miami Beach Convention Center for rehearsals and the run of the show, Anthony notes that would have been impossible in 1964 because of segregation laws. The Hampton House, where so many black stars, athletes and leaders stayed in that era, hosted a luncheon for the “One Night in Miami” company, and the actors and director were able to visit the room in which the play is set – or as Cofield calls it in a “Hamilton” reference, “the room where it happened.”

“You could feel the energy when you walk into that tiny space,” Anthony says. “You could touch the walls. You could see how far it was from South Beach.”

Thomas, who has appeared on Broadway in “The Lion King,” “Caroline, or Change” and “The Color Purple,” has had a busy movie, recording and TV career, starring as Andre Harris in the Nickelodeon TV series “Victorious.” He won his Grammy in 2015 at age 21 for his work as a writer-producer on the Toni Braxton-Babyface album “Love, Marriage & Divorce.”

To play Cooke, he says, “I gathered 15 interviews. I studied his mannerisms and onstage presence. His live album at Harlem Square captured his natural speaking voice. The essence of his vocal tone is raspy – he smoked a lot – and he sung each record with attention to enunciation.”

Though he’s young, Thomas feels a personal connection to the play.  His grandfather, an opera singer, was involved in the civil rights movement. He knew Martin Luther King and Malcolm X.  Thomas has a photo of his mother getting a kiss from Ali.

In “One Night in Miami,” Thomas as Cooke sings the powerful, poignant and then-unrecorded civil rights ballad “A Change Is Gonna Come.”

“I’m excited to sing it,” he says. “I’m not taking that responsibility lightly.”

Delane, an African-American history major at Ohio’s Wittenberg University, calls playing Malcolm X for the third time “an honor and a blessing.”

“This was only 50 years ago, and we’re still dealing with the same things,” Delane says.  “I love what Kemp has laid out for us to explore as men. Bringing it here to Miami brings this to a new level….There’s a pride in facing that history, in addressing and communicating it.”

Pritchett calls Brown “a man among boys at the time he played the game.” Brown, Malcolm X and singer-actor-activist Paul Robeson were heroes to the actor’s father, but like his fellow actors, Pritchett didn’t know this story.

“There are so many things about the history of America you don’t learn through this system of education,” he says.

A TV and stage actor with plenty of experience doing Shakespeare, Pritchett sees Brown – who never leaves the stage in the play – as “a kind of comic relief. He’s not involved in the deep, deep debates. He steps back. He’s not going to tell the young Cassius what to do.”

Miami New Drama artistic director Michel Hausmann, who met Cofield in grad school at Columbia, has wanted to present “One Night in Miami” since he launched the company with “The Golem of Havana” in 2016. He was aware of the piece when the two were in school together, but in retrospect, he feels its impact will be even greater today.

“If you had seen it when Barack Obama was president, you’d see it, leave and feel good about yourself. It’s completely different today,” Hausmann says. “Racists have a way of speaking from the corner, saying everything except what they’re really thinking.”

Of Cofield, Hausmann says, “Carl is a hero we didn’t know existed. And there are so many successful [Miami] playwrights whose work doesn’t get produced here. Part of our mission is to bring back those voices of color, artists whose voices were shaped by growing up here.”

Cofield, whose South Florida family will see the play, calls staging it on Miami Beach “a meta experience.” Powers, who hasn’t been to Miami in many years, is coming in for opening weekend and will participate in a talk-back after the 3 p.m. matinee Oct. 28.  The prospect of seeing his play come to life where this bit of history took place is as exciting to him as the Olivier Award-nominated production at London’s Donmar Warehouse in 2016.

“It was always a goal to have it done in Miami. You wonder how it will resonate there,” Powers says. “There are so many great artists, so much great work coming out of Miami. I’m excited to be a part of that. That’s why I named the play what I did, [even though] no one in it was from Miami.”