‘On Your Feet:’ The Estefans Make Dreams, Music Come Alive Once Again 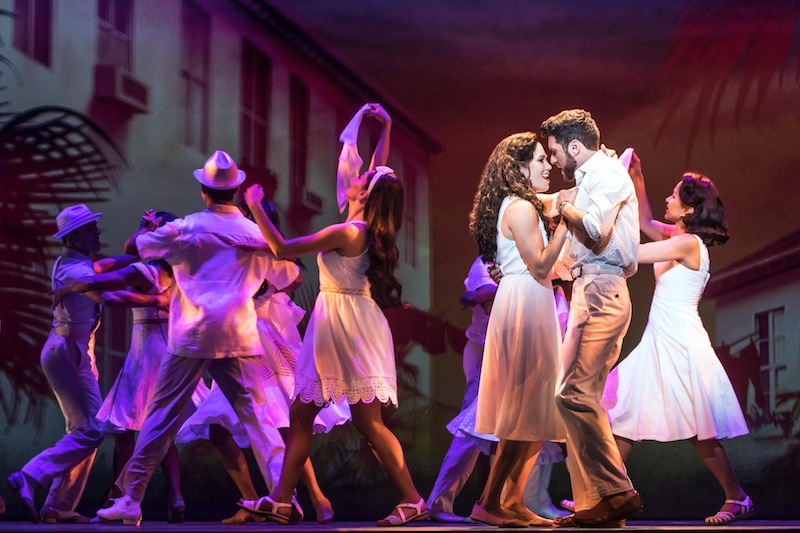 After a tryout run in Chicago, 34 previews and 746 performances on Broadway, and a tour launch in Buffalo, “On Your Feet!” has finally opened in the place where Cuban-born music superstars Gloria and Emilio Estefan made their dreams come true: Miami.

At Friday’s red carpet opening at the Adrienne Arsht Center for the Performing Arts, with the Estefans and their extended family in attendance, this made-for-Miami bio musical played to an audience that loved it and got it, down to the most fleeting references to radio stations, now-defunct clubs and the personal twists of Cuban exile history.

Jukebox musical aficionados might argue that “Jersey Boys” (about Frankie Valli and the Four Seasons) or “Beautiful” (about Carole King) represent the pinnacle of the form, but they’d get plenty of pushback from the thousands who will see “On Your Feet!” during its Arsht Center run through Oct. 15.hrough their talent, intense work ethic and entrepreneurial imagination, the Estefans have become extraordinarily successful since a young Emilio asked a teenaged Gloria to sing with the band that became the Miami Sound Machine.Their inspiring story is also emblematic of the American Dream, with all its possibilities. That dream, as Gloria Estefan reminded the cheering audience from the stage at the end of the show, remains very much alive, despite the current political climate.

With a script by Oscar winner Alexander Dinelaris (the “Birdman” co-screenwriter who attended Barry University for a couple of years), the musical mixes romance, loss, prejudice, estrangement and reconciliation in a story nestled among a joyous, moving catalog of hits.

Most of the songs were written by Gloria Estefan or by the couple; pop star Jon Secada, Miami Sound Machine members Clay Ostwald and Jorge Casas (part of the killer onstage band), and the Estefans’ singer-songwriter daughter Emily (who collaborated with her mom on the moving “If I Never Got To Tell You”) are among the other contributors to the show’s immediately familiar score.

Peppering his tale with emotionally potent flashbacks, Dinelaris tells the story of a girl who grew up under the ever-vigilant eye of a controlling mother and a boy who arrived in Miami at 14 only to discover signs reading “No Pets, No Cubans” on Miami motels and apartment buildings.

Gloria (the radiant Christie Prades) was a music-loving teen songwriter headed toward a psychology degree at the University of Miami when she met the four-years-older Emilio (the magnetic Mexican actor-singer Mauricio Martinez), the brains behind the Miami Latin Boys. The two clicked in a major way: The Miami Latin Boys soon became the Miami Sound Machine, with Gloria becoming lead singer, frequent songwriter and, as of 1978, Emilio’s wife.

“On Your Feet!” chronicles the couple’s spectacular highs and the obstacles – professional and personal – the two faced.The music industry wanted to pigeonhole Miami Sound Machine as a Latin band, but Emilio had boundless crossover dreams. When a defiant Martinez says to a music executive, “Look at my face. Whether you know it or not, this is what an American looks like,” the audience of diverse Americans lets out an empathetic roar.

Closer to home, the Estefans had struggled with the early death of Gloria’s father José Fajardo (Jason Martinez), a Bay of Pigs and Vietnam War veteran debilitated by multiple sclerosis after exposure to Agent Orange.

They also faced the boundless disapproval of Gloria’s mother, Gloria Fajardo (Nancy Ticotin), a teacher and talented singer whose father had denied her the chance to become the Spanish voice of Shirley Temple. The senior Gloria didn’t think much of musicians – her son-in-law in particular – and the Estefans’ insistence that Gloria’s younger sister Rebecca (Claudia Yanez) come with them on tour led to an estrangement that might have dragged on and on were it not for the 1990 bus crash that nearly claimed Gloria Estefan’s life.

As depicted in “On Your Feet!,” Gloria Fajardo rushed from Miami to the Manhattan hospital where her daughter lay with a fractured spine and an uncertain future, only to find Emilio there weeping. The two sing Gloria and Emily Estefan’s “If I Never Got To Tell You,” a poignant song full of love and regret. Distraught, fearful and defiant, Emilio swears, “She’s not going to die. Not before me, anyway.”

And at that moment in the opening night audience, taking in a scene they lived and have watched many times, Gloria Estefan put her head on her husband’s shoulder, and he kissed her.

Though it acknowledges the couple’s trials and losses, “On Your Feet!” is largely two and a half hours of sheer joy.

Director Jerry Mitchell and associate director Andy Señor Jr. – a raised-in-Miami talent whose bandleader father was the Fajardos’ neighbor in Cuba – are inspired in their staging of intimate scenes and large-scale dance numbers. Tony Award-nominated choreographer Sergio Trujillo, whose credits include “Jersey Boys” and “Memphis,” has done an exquisite job of pairing vibrant Latin dance moves with the music. And oh, that music.

On an upstage bandstand that sometimes brings them down front and center, the band delivers Miami Sound Machine-worthy renditions of hit after hit (the Estefans did the orchestrations). You’ll hear “Conga,” “Dr. Beat,” “Don’t Wanna Lose You,” “Here We Are,” “Live for Loving You,” “Rhythm Is Gonna Get You,” “Turn the Beat Around” and more, plus the irresistible call that is “Get On Your Feet.”

David Rockwell’s set, Darrel Maloney’s projections, Kenneth Posner’s lighting and Emilio Sosa’s costumes conjure everything from the look and vibrant sunsets of Miami through different eras to that life-altering bus crash on a snowy Pennsylvania road.

Led by Prades and Martinez, charismatic singers with a sizzling chemistry, the cast is loaded with talent. Alma Cuervo, reprising her role from the Broadway production, brings warmth and a touch of mischief to Gloria’s abuela Consuelo. Ticotin conveys the diva who might have been as she sings “Mi Tierra” in Havana before Gloria Fajardo’s life is forever altered.Carmen Sanchez (alternating with Amaris Sanchez) shines as Little Gloria, the girl who can’t stop singing, and Jordan Vergara (alternating with Kevin Tellez) is a dancing powerhouse as the bar mitzvah boy Jeremy, the Estefans’ son Nayib and Young Emilio.Jason Martinez is a moving presence as José Fajardo, who never got to see his daughter and son-in-law’s dazzling success.

Those achievements, which include President Barack Obama awarding the couple the Presidential Medal of Freedom in 2015 and Gloria Estefan becoming the first Cuban-American to receive the Kennedy Center Honors (that will happen in December), make up the fabric of an extraordinary journey.

Since “On Your Feet!” opened in the fall of 2015, the political and the personal have shifted for the Estefans. The election that seems to have endangered the American Dream happened; President Trump, breaking with tradition, won’t attend the Kennedy Center Honors. And in July, the indomitable Gloria Fajardo passed away.

Still, “On Your Feet!” represents, as the Estefans intended, a source of inspiration set to the soundtrack of their lives. Many in the thoroughly entertained and often moved Miami audience would claim that soundtrack too.