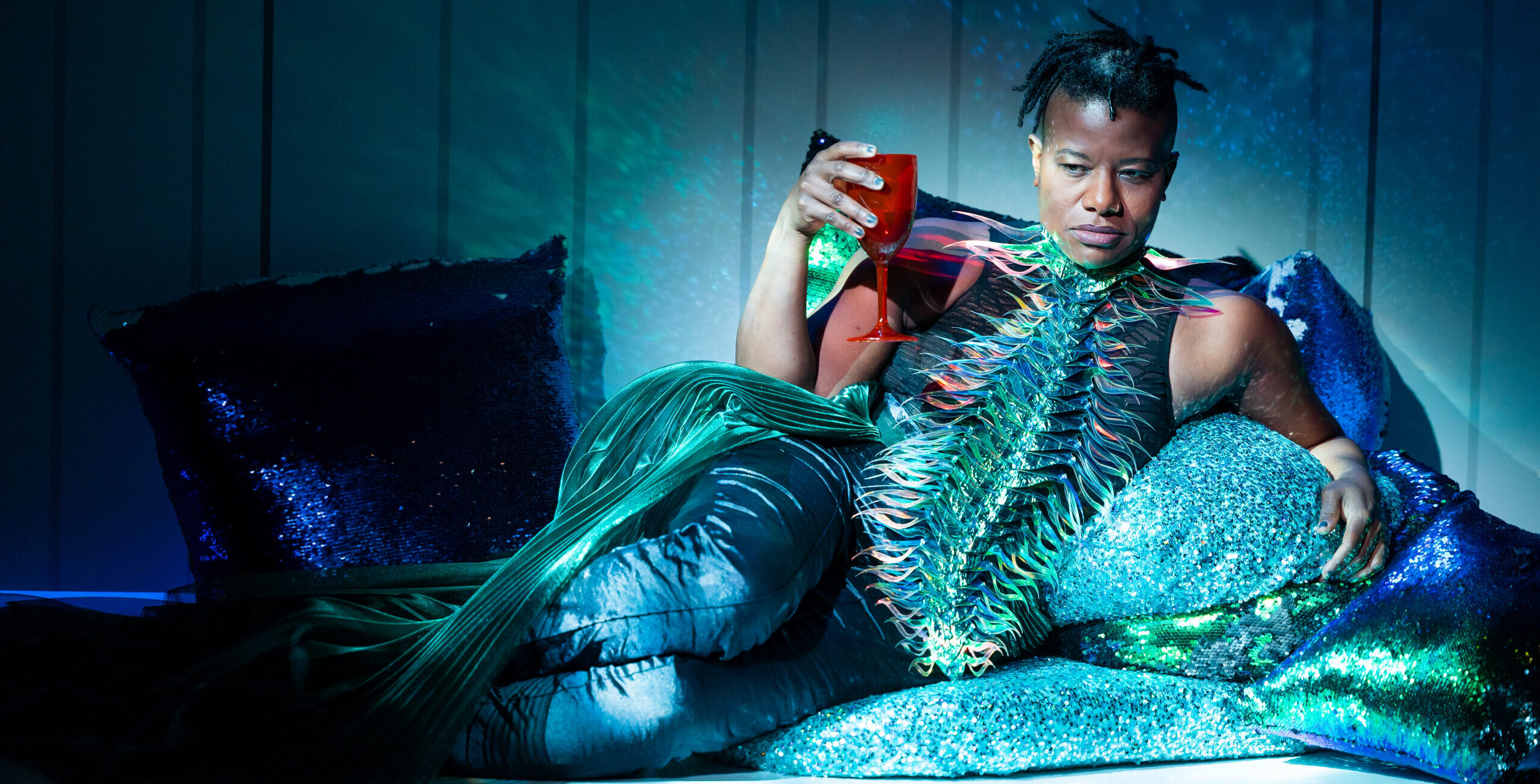 The telltale brown dots on the map of Miami-Dade’s coastline don’t lie. According to a recent Blue Water Task Force report, enterococcus bacteria levels were dangerously high at four of Miami-Dade’s beaches. In layman’s terms, that means there are too much feces in the water. It was not always this way.

The ocean, if we bother to listen, has a message for us. 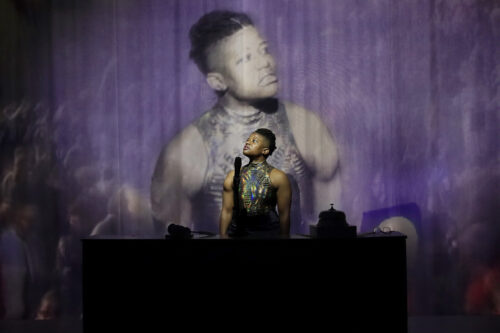 PearlDamour, the Brooklyn-based creative duo made up of director Katie Pearl and writer Lisa D’Amour, envision an imaginary showdown between the Ocean and a fictional World Senate that wants to cut her down to size, thus making room for—you guessed it—more people and more of their stuff.

The action takes place at the Senate’s international chambers, where Mr. Majority is lobbying. In his view, according to Pearl, the Ocean is “dangerous and sick and needing to be tamed” and he wants to ship her off the planet. After all, wouldn’t it be great to be able to just hop into your car and drive from Hialeah to Havana?

As Mr. Majority argues his case, the Ocean arrives to give her defense, making her entrance on a mound of trash.  The kicker is that both Mr. Majority and Ocean are embodied by one actor, OBIE-winning performer Jennifer Kidwell.

A graduate of Philadelphia’s Pig Iron School, Kidwell is well-versed in the rigors of experimental, physical theater. Critics often praise both her acting chops and her onstage charisma. She recently appeared in the Tony-nominated “Fat Ham” at New York’s The Public Theater and this October premiered the comedy “Those with 2 Clocks” at Philadelphia’s Wilma Theater. 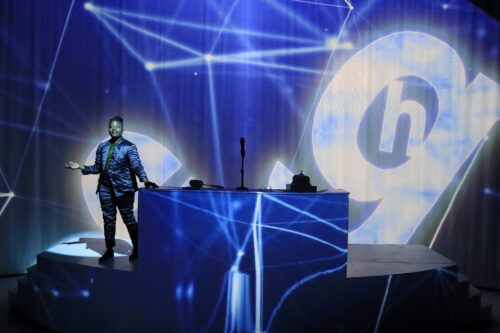 Jennifer Kidwell morphs between the roles of the Ocean and Mr. Majority, who is lobbying the World Senate to shrink the oceans down to a “more manageable size” in “Ocean Filibuster.” (Photo courtesy of Pin Lim, Forest Photography)

“Jenn just loves a performance challenge,” says D’Amour, “and what a challenge it is to play these two roles. The piece is not that long, but it really is quite demanding.”

The actor morphs from one character to the other in transformations that are subtle but compelling.

Whether the Ocean fascinates you or frightens you, audiences learn in this show how crucial it is to our survival on this planet. If you enjoy breathing, thank the ocean, which produces more than half of our oxygen. Hungry? The ocean is the primary source of protein for a third of the world’s population. Finally, oceans are a critical carbon sink, sequestering in their depths the carbon dioxide we humans so busily produce on Terra Firm.  In that regard, Pearl says that the ocean “is a little bit of a human enabler because we’re putting all this carbon into the air and the ocean is just taking care of it—until it can’t anymore.”

Although the work’s subject matter is about as serious as a heart attack, Pearl says that the show can nevertheless be “abstract and experimental and playful,” often using music to convey its message. The wildly creative New York composer Sxip Shirey, who turns to everything from electronics to found objects in order to create rhythm and melody, explores many different musical genres in “Ocean Filibuster.”

“There’s one song that feels like a faux patriotic anthem, one feels like a ballad, one feels like a straight-up pop song, one has a little bit of a sort of a punk energy to it,” D’Amour says. “We don’t call it a musical because it doesn’t have a traditional musical structure, but there’s song throughout.”

Here in Miami, singers Tyle Hooker, Nikita Orlhac, Kevin Martinez, Caterina Petti, Gabriella Villalobos, all BFA opera students from New World School of the Arts, join Kidwell on stage and do much of the singing. In flowing, pleated costumes designed by award-winning Serbian costumer Olivera Gajic, the chorus looks like they could have just stepped off a winning float from Key West’s Fantasy Fest. Gajic fashioned their fanciful headpieces from water bottles that were heated, melted and stretched to form elaborate coronas. 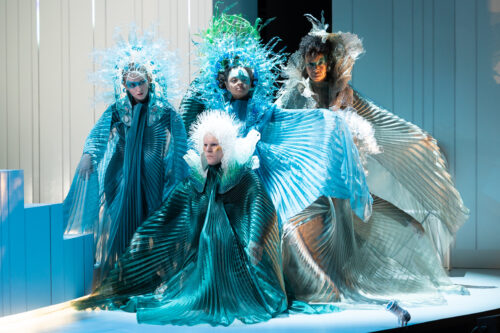 The Ocean Choir enters in costumes and headdresses designed by award-winning Serbian costumer Olivera Gajic in “Ocean Filibuster” in a photo from the American Repertory Theater Production. The headpieces are fashioned from heated and stretched plastic water bottles. (Photo courtesy of Maggie Hall)

The show also uses expansive video with animated, hand-drawn images that aim to create a sense of wonder and to allow the audience to experience the ocean not from above the water, but from within. ” ‘The Ocean,’ D’Amour says, “hypnotizes the audience into thinking that they are a deep-sea fish . . .  I just wanted the audience to feel immersed, to be able to get taken to places that they would never get a chance to go.”

The intermission is a hands-on affair, where theater-goers will be able to playfully embody and imagine some of the concepts the piece discusses. “It’s a combo of, like, science concepts and whimsy and wonder,” D’Amour says.

There are games that were designed by Ph.D. students from The Girguis Laboratory, a lab at Harvard University that investigates all manner of astonishing deep-sea critters. If you could have your brain redistributed, one game asks, would you put in each of your extremities, as does the octopus with its independently “thinking” tentacles, or would you, perhaps, prefer it in your stomach? The Ocean Conservancy and the University of Miami’s Rescue-a-Reef scientists helped develop the Coral Reef “Thrive or Die” game, with crocheted corals by yarn artist Debora Rosental, sculpture by the Miami Dade College Earth Ethics Institute and 3-D printing by the college’s Makers Lab.

This week, for the first time, the UN Climate Change Conference will have an Ocean Pavilion at the delegations-only Blue Zone. Scientists recognize that it will take a diverse array of voices to find solutions to the crises our oceans face.

With “Ocean Filibuster,” PearlDamour has made itself part of this vital conversation.