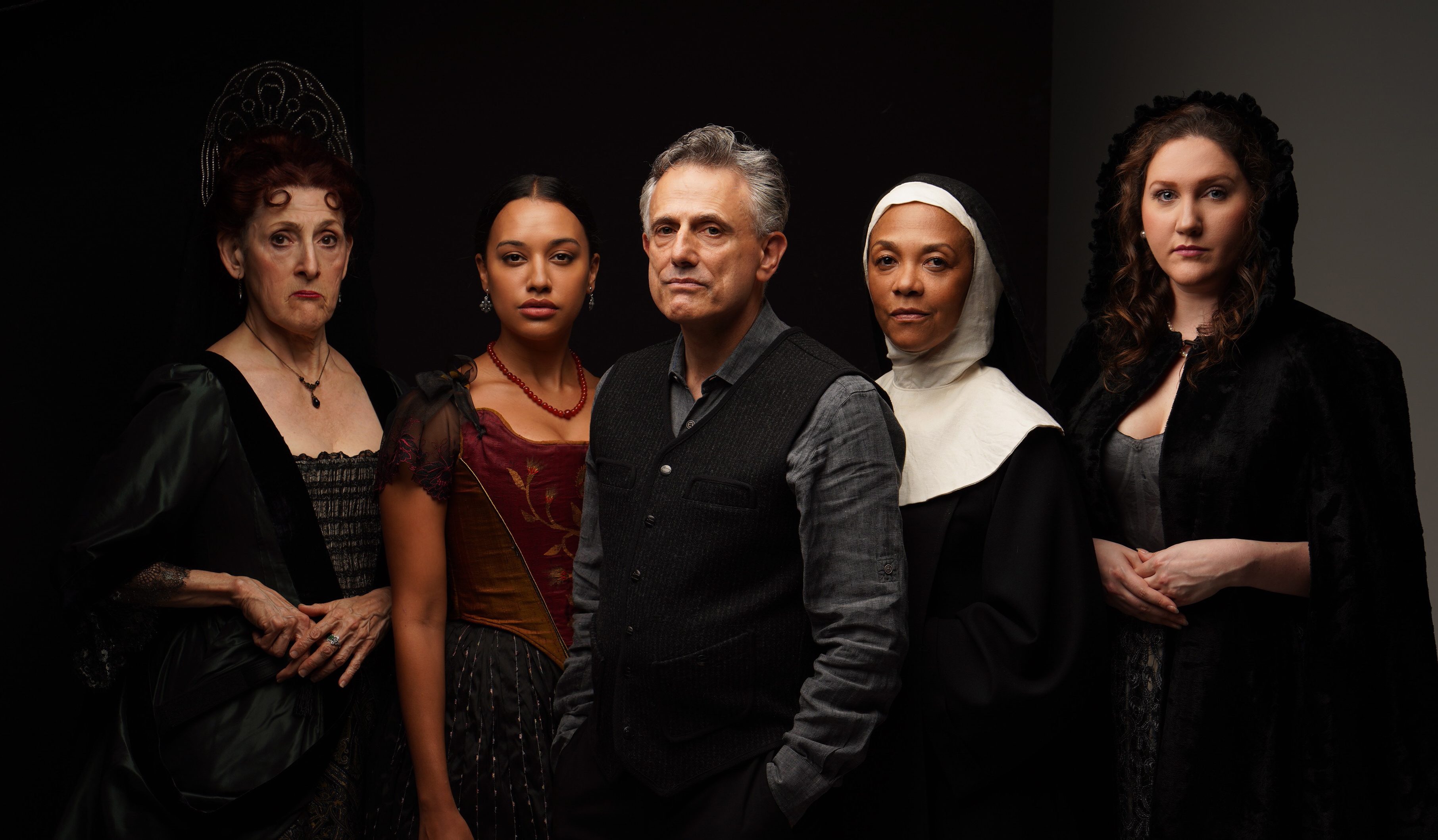 David Greenspan is a multifaceted theater artist – a playwright, actor and director – with a wide-ranging knowledge of and appreciation for the great writers who preceded him.

A six-time winner of Off-Broadway’s Obie Award, including the 2010 Obie for sustained achievement, Greenspan has written nearly two dozen plays, including a 2009 musical version of the novella “Coraline.” His eclectic body of work includes plays and solo pieces inspired by or adapted from James Joyce, Gertrude Stein, Nathaniel Hawthorne, Ferenc Molnár and Thornton Wilder.

Wilder is, in fact, the reason Greenspan has come to South Florida. His 2018 stage version of Wilder’s Pulitzer Prize-winning 1927 novel “The Bridge of San Luis Rey” will open Miami New Drama’s season at the Colony Theatre on Miami Beach. Previewing Oct. 24-26 and opening Oct. 26, the play (like the novel) is set in Peru in 1714, when five people crossing an Incan rope bridge fall to their deaths as the bridge collapses.

Called “a classicist in experimental clothing” when he received the CalArts/Alpert Award in 2002, Greenspan acknowledges, “Some of my work can be challenging, content-wise.” But not “The Bridge of San Luis Rey.”

“This is very relatable,” he says. “It’s about life and living, death and dying, that inextricable link. And the fragility of life.”

This is the second time Greenspan’s play has been produced. Its February 2018 world premiere at Two River Theater in Red Bank, New Jersey, was directed by Ken Rus Schmoll [CQ], with the playwright portraying the narrator/Uncle Pio – in part, as a nod to the Stage Manager in Wilder’s “Our Town” – and Miami-raised Broadway veteran Mary Lou Rosato as Doña María, the lonely Marquesa de Montemayor.

For the Miami New Drama production, Greenspan is doing triple duty as playwright, actor and director. He’s adapting Schmoll’s staging, working again with Rosato but otherwise fitting a new set of actors into his version of Wilder’s moving tale.

The cast is a mixture of South Florida-based actors – Lindsey Corey as Doña María’s daughter Doña Clara, who has moved to Spain to distance herself from her needy mother; Karen Stephens as Madre María, the compassionate head of the local orphanage; recent New World School of the Arts grad Kevin Veloz as Manuel, an orphaned twin who falls for a renowned actress; Carlos Orizondo in multiple roles – and actors based elsewhere. 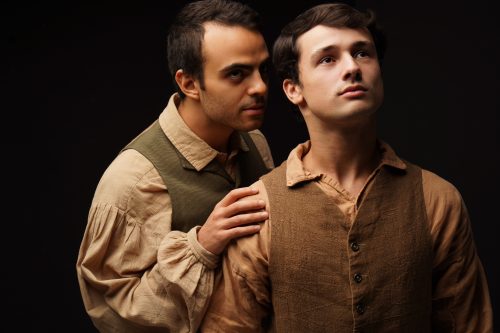 Originally, Greenspan says, he was working with a composer to do “The Bridge of San Luis Rey” as a musical theater piece.

“I read the novel not long after [the terrorist attacks of] Sept. 11. I was also thinking about the 1960 crash of two planes over New York, when one crashed on Staten Island and the other in Park Slope [Brooklyn],” he says. “I wrote it in rhyme, then waited. But we couldn’t get the rights because someone had them for an opera.”

A legacy of that abandoned project is that Greenspan’s script retains its rhyming dialogue.

“I wanted to find a form, a medium to present it in an original theatrical way without losing the emotional and intellectual singularity of the novel. I had to delete certain characters to give it a sense of theatrical propulsion,” the playwright says. 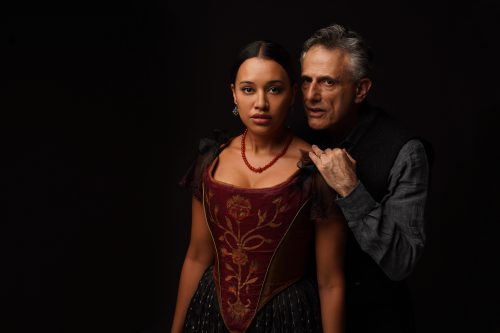 “Everything that’s important in this play is Thornton Wilder. The theology, the philosophy, the dialogue, the characterizations. But I wrote the play, put it in rhyme and moved around some of the events.”

Greenspan’s play has brought Rosato home to work for the first time since she left the University of Miami to join the inaugural class of actors at Juilliard’s Drama Division in New York. With fellow grads Kevin Kline, Patti LuPone and others, she became a founding member of John Houseman’s celebrated touring troupe The Acting Company. Her rich career has included work in theatrical classics, musicals, movies and television, and she is currently teaching acting at the Yale School of Drama.

Rosato calls Doña María an “exquisite” role, one that makes her think of her late mother and Cuban grandmother. The character tries to keep an epistolary connection with her distant daughter through brilliantly crafted letters. But her life has been a difficult one.

“Her oddness as a human being left her marginalized,” Rosato says. “She was always hungry and needy for something beyond what she had. That drive made it impossible for her to live in the moment. Then she has one moment she experiences as love – and she’s gone.”

The play’s verse, she says, “helps create a style. It’s like riding a cantering horse. It just flowed out of David because he’s a man of such infinite knowledge and appreciation for and long experience with this art form.”

“It’s like breaking down a song to a monologue, knowing when to hit the beats, when to breathe, knowing what words to stress,” he observes. “David is so impressive. He never misses a beat. He came in Day One knowing all his lines, but he can’t just sit back as the director and pay attention to all of us. He’s the forward motion of the play, the omniscient force.”

Dilone, an actress playing a glamorous actress, notes that some of the characters in the play are “mean to each other” as they try to navigate the challenges and intrigues of love. But she relates to La Perichole.

“She’s driven by love and by empathy – and also by ego,” Dilone says, smiling. “I get a lot more TV and film opportunities, but if this goes to New York, it would be a dream to go with it. Theater is an actor’s medium. You tell a story from beginning to end, and if you don’t like something, you can change it.”

Stephens, who will be among the stars of Christopher Demos-Brown’s “American Son” when the play gets its Zoetic Stage South Florida premiere in January, says she has long wanted to work with Miami New Drama because of the company’s dedication to diverse stories and artists.

For Stephens, Greenspan’s play is “about love and loss. Each of these characters has a story about love. That love makes them almost myopic to a certain extent. Each learns a lesson about life and love.”

Hausmann’s focus on telling stories that reflect the region’s diversity is part of the reason “The Bridge of San Luis Rey” has made its way to South Florida. When Miami New Drama produced Wilder’s classic “Our Town” in 2017, the family of the play’s young bride Emily spoke Spanish at home (with translations by Pulitzer Prize winner Nilo Cruz), while her groom George’s family spoke Creole. The Wilder Estate was so pleased with the new version, which retained the original’s setting and time period, that it brought Greenspan’s script to Hausmann’s attention.

“This is not a play about life in colonial Peru. It’s just a play about being alive,” Hausmann says. “It speaks highly of Miami to have a legend like David Greenspan developing a piece here with Miami talent. We have a diverse city. That is our asset. We should lead with that.”