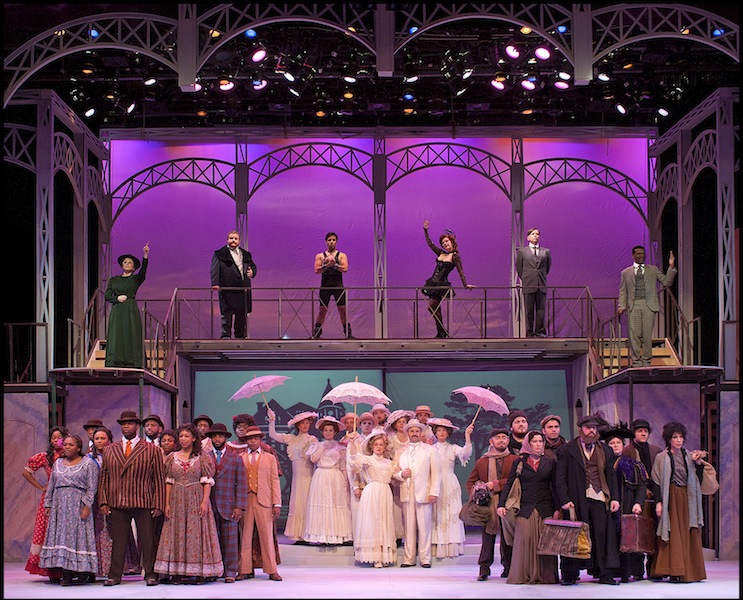 Two grand musicals infused with the sweep of history and a third about a father with a penchant for spinning tall tales lead the race for the 40th annual Carbonell Awards, South Florida theater’s highest honor.

Announced on Wednesday, the 100 nominations in 20 categories include a competition-leading 10 for the Maltz Jupiter Theatre’s production of Alain Boublil and Claude-Michel Schönberg’s worldwide musical hit Les Misérables; and nine each for the Actors’ Playhouse production of the Lynn Ahrens-Stephen Flaherty-Terrence McNally musical Ragtime and Slow Burn Theatre’s staging of the Andrew Lippa-John August musical Big Fish.

Other musical contenders include the Maltz’s Billy Elliot with six nominations, and Slow Burn’s Bonnie & Clyde with four.

Three successful South Florida-based playwrights earned nominations for their new works: McKeever for Daniel’s Husband; Demos-Brown for Stripped; and Pulitzer winner Nilo Cruz, who partnered with Michiko Kitayama Skinner to create the docudrama Tsunami, which had its world premiere at the South Miami-Dade Cultural Arts Center. (McKeever and Demos-Brown, it should be noted, are friends who are among the founders of Zoetic Stage.)

In addition to his best new work nomination, McKeever is nominated as best supporting actor in a play for his performance in Dramaworks’ Picnic. Ann Marie Olson is up for best actress in a play (Thinking Cap Theatre’s play-with-music Always…Patsy Cline) and in a musical (Slow Burn’s Big Fish). Shane Tanner was recognized with a best actor in a musical nomination for his leading performance in Big Fish, also receiving a best supporting nod as Jud in The Wick Theatre’s Oklahoma!. Elizabeth Dimon got supporting actress nominations for her work in City Theatre’s Summer Shorts and the Maltz’s Billy Elliot. And actor Rob Donohoe got a lead nomination for Buried Child at Dramaworks and a supporting one for Glengarry Glen Ross at the Maltz.

By county, Palm Beach County theaters were dominant, with 35 of the 47 nominations going to the Maltz (which leads all South Florida companies with 21) and Dramaworks (its shows earned 14).

Companies in Miami-Dade County received 28 nominations, with 11 going to Actors’ Playhouse at the Miracle Theatre. GableStage at the Biltmore Hotel and the Arsht Center-based Zoetic Stage got a half-dozen nominations each.

Slow Burn Theatre, which began the year in Boca Raton and did shows at the Broward Center for the Performing Arts and the Aventura Arts & Cultural Center before moving to the Broward Center with Big Fish in late October, earned 15 nominations, helping boost Broward’s total to 25. Island City Stage earned 11 nods, a half-dozen for Daniel’s Husband.

First presented in 1976, the Carbonell Awards are named in honor of the late sculptor Manuel Carbonell, who designed the bronze statue – a kind of tilted egg with a hole through its center – presented to winners. The 40th annual awards recognize work done in Carbonell-eligible productions in Miami-Dade, Broward and Palm Beach counties during 2015.

The 40th annual Carbonell Awards show and ceremony will take place at 7:30 p.m., April 4 in the Amaturo Theater at the Broward Center for the Performing Arts, 201 SW Fifth Ave., Fort Lauderdale. Tickets priced at $20 for groups of 10 or more go on sale Jan. 20; $25 individual tickets go on sale March 7, and day-of-show tickets are $35 (all tickets have a service fee). Visit www.carbonellawards.org for information on the awards program and group tickets. Individual tickets will be available by calling the Broward Center box office at 954-462-0222 or visiting www.browardcenter.org.