Nilo Cruz Is Back, With New Powerful Monologues 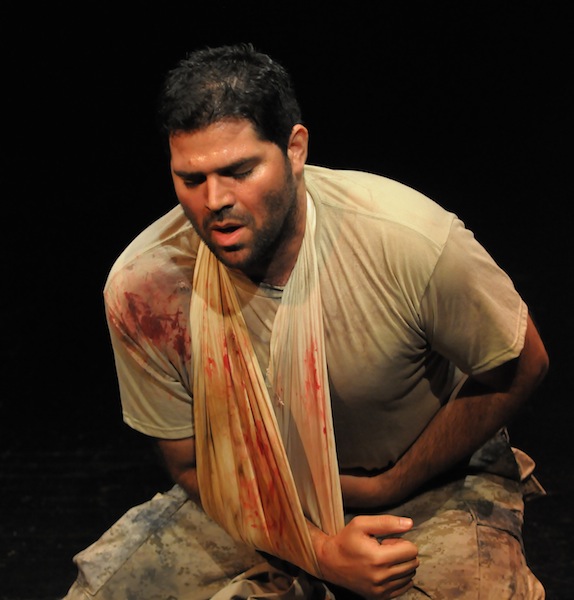 The work and words of Nilo Cruz are back in South Florida, ever so briefly, in a trio of linked pieces at Miami-Dade County Auditorium’s On.Stage Black Box.

In a program running through Sunday, the Pulitzer Prize-winning Cuban-American playwright turns his focus to Afghanistan. Billed as “three inner monologues made public,” the plays are The Journey of the Shadow (2013), Melisma (world premiere) and Farhad or the Secret of Being (2012).

Delivered in English (with simultaneous Spanish translation available), each simply staged play runs about a half hour, flowing from one into the next. Cruz directs the first two, Andy Señor Jr. the powerful final piece, which becomes a kind of mini-musical with accompaniment by Mostafa Makki (oud), Rolando Grooscors (guitar) and Miguel Hernández (percussion).

In The Journey of the Shadow, Andy Barbosa plays eight-year-old Marcelo Miguel, an imaginative boy whose father is a soldier serving in Afghanistan. Missing his dad, he regularly writes letters that wind up dappled with tears, shoving his stick-figure drawings into the envelope as well. But one day, his shadow leaps into the envelope and refuses to come out, embarking on a journey that becomes comical, whimsical and finally poignant.

As a physical actor, the Cuba-trained Barbosa has few peers in South Florida. In the course of Journey of the Shadow, he folds himself into a shape that suggests Marcelo Miguel’s shadow confined in an envelope. He delivers a bit of monologue while doing a tripod headstand, becomes a succession of other characters. He is a whirling torrent of energy, as boys so often are. Unfortunately, his words pour out at similar speed, and that delivery coupled with a sometimes heavy accent results in some of Cruz’s imaginative wordplay and imagery being lost or obscured.

Melisma, which means the singing of a single syllable, features Alex Alvarez as a soldier nicknamed Loló. The father of Marcelo Miguel, he is a former actor who has been wounded and separated from his fellow soldiers in Afghanistan. Bloodied, in pain, fearful, the soldier retreats into memory and imagination, pulling a wrinkled black-and-white photo of his wife Susana from his cap. He recalls their days onstage together, briefly escaping into the fantasy that they have been hired to be in a movie being filmed in Afghanistan. But as the moving Alvarez exits, cradling his jacket as if it were a baby, it’s clear that real escape is far more uncertain.

In terms of impact, the first two pieces are a simpler prologue to the emotionally shattering Farhad or the Secret of Being. Flowing from spoken words into song and back again, the play-with-music centers on Farhad, a teen who has spent most of her young life growing up on the outskirts of Kabul disguised as a boy. This has afforded her protection and opportunity, to study, to work processing pomegranates, to move about freely and show her face to the world.

But the father who protected her is now forcing her to embrace her true gender, demanding that she become the second wife to a much older man. Farhad or the Secret of Being is a personal and societal lament, a memory of joy, a cry for freedom, a look at the inner lives of women in a repressive society.

Young actors Andrea Ferro and Irene Benítez are making their professional debuts in the piece, Ferro as Farhad, Benítez as the embodiment of the male self she’ll soon leave behind. They sing beautifully, and under Señor’s direction with the musicians intensifying emotion, they conjure a world of possibility denied, of too-young heartbreak.

But of course the real conjurer, of Farhad and Journey and Melisma, is that magical stage poet, Nilo Cruz.