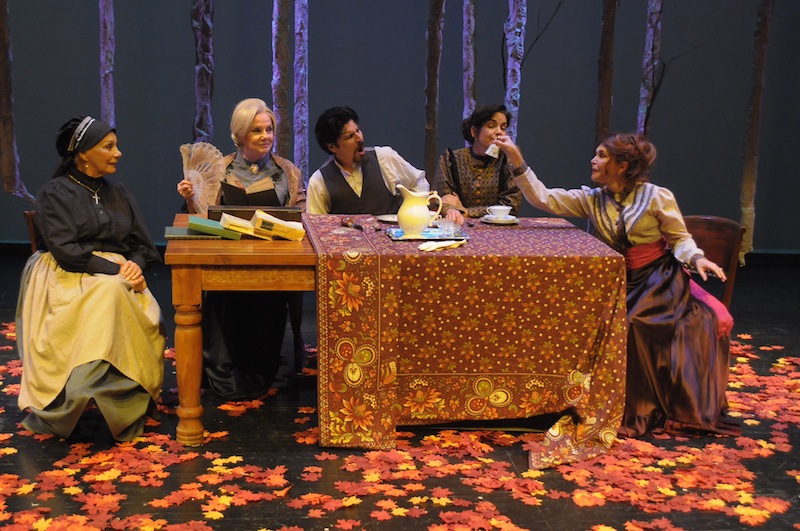 The late poet Miller Williams used to call a poem, “the meeting place between the writer and the reader.” When it comes to theater, the play could be called the meeting place between the director and the actors, and when it works, the audience, which has the good fortune of witnessing the chemistry that transpires between a phenomenal play, an astute director, and a talented cast. This is the case with Arca Images and Miami-Dade County Auditorium’s production of Anton Chekhov’s Tío Vania (Uncle Vanya) running through Sunday.

Exquisitely directed by Pulitzer-prize winning playwright Nilo Cruz, this adaptation of Chekhov’s masterpiece, performed in Spanish with simultaneous translations in English, revives the play’s fascinating ecological bent while rendering the psychological richness of four adults who wrestle with the theme of “a wasted life.”

When a bombastic, elderly professor (well played by Germán Barrios) arrives at his rural estate with his dazzling, much younger wife Elena (Alexa Kuve), Vania, the brother of the professor’s late first wife resents him for having acquired a beautiful woman and professional notoriety with little talent or merit. Mijail Astrov (Ariel Texidó) is a medical doctor with a deep love for the land. Both he and Vania fall in love with Elena while Sonia (Grettel Trujillo), Vania’s hardworking, kind-hearted niece silently pines for Astrov. The cast is rounded out with strong performances from Zully Montero and Martha Picanes as Vania’s mother and a nursemaid respectively. The play reaches its crescendo and tempers fly when the professor proposes selling the estate, which has been the center of Vania and Sonia’s lives for years.

One of the first plays in world literature to express grave ecological concerns, Tío Vania is uncanny in its relevance. Astrov talks about the disappearance of trees and green spaces with an urgency that is often unmatched even today. Fernando Teijeiro’s set design is simple and elegant: fall leaves scattered across the stage; an elegant table set for six. In the background, slender, barren tree trunks hang, intimating the play’s ecological focus. A pair of gloves placed on the table become a beautiful symbol of femininity, utility and frivolity.

The performances in Tío Vania are top-notch. Kuve is intriguing as the professor’s coquettish, young wife. She twirls about, catching the fancy of both Vania and Astrov, but as the play develops, a personal crisis reveals deep fissures in her personality, a conflict between fierce loyalty to her marriage and her own longings and frustrations.

Texidó’s stage presence is nimble and energetic. As Astrov, the passionate but cynical doctor, he manages to cultivate a humorous counterpoint to his character’s murky depths. Larry Villanueva is a force to be reckoned with as Tío Vania. He layers his character’s disillusionment and apathy with a form of buffoonery that borders on madness – a way of making his existential despair all the more marked. Trujillo is wonderful as Sonia, Vania’s steadfast niece who takes care of everyone else, but desperately wants something of her own. As stepmother and daughter, Kuve and Trujillo create a chemistry on stage that reflects an intricately woven alliance between two very different women. In one memorable moment the two lean backwards, each in her reverie. Gradually they sit up and face each other in a stunning silence that reflects their awareness of their limitations as women, but also the wisdom that their vantage point provides them.

Tío Vania continues to be forward thinking in its concerns for the environment and far reaching in the leaps it makes between fidelity to the land and human rights. It’s also an opportunity to witness some of Miami’s finest actors in full possession of their talents. Don’t miss it.