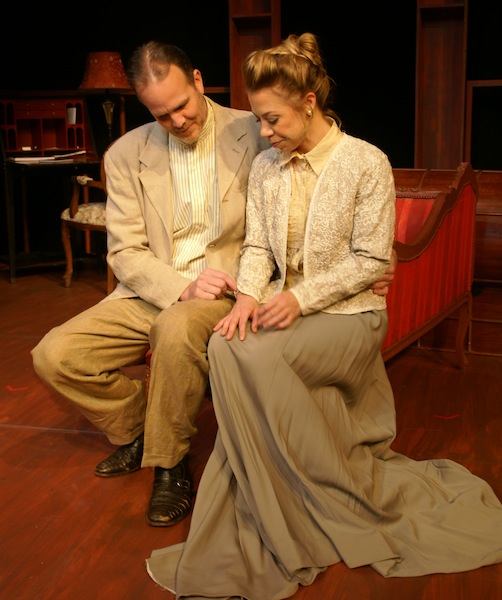 New Theatre is celebrating its 30th anniversary this season, a milestone that’s a testament to the tenacious dreams of South Florida theater artists.

Reflecting the diversity of its community, New Theatre has mounted ambitious productions of world and American theater classics, the works of William Shakespeare and, increasingly on Martinez’s watch, new works. In commissioning and premiering Nilo Cruz’s Anna in the Tropics in 2002, the company notched a glorious achievement for any theater, let alone one with just over 100 seats: It brought to life a play that won the Pulitzer Prize.

To celebrate the 30-year milestone, Martinez has turned to four playwrights whose work has previously been produced by New Theatre – Susan J. Westfall, Mario Diament, Sandra Riley and himself – then added the Arthur Miller classic Death of a Salesman. Westfall’s Two Weekends and a Day had its world premiere in November-December, and Martinez’s Roof! will get its world premiere run in April.

Currently, New Theatre is trying something different with Diament’s Franz & Albert, which is getting its American premiere, and Sandra Riley’s Footprints, a world premiere. Each play is a two-hander, and the company is running the 90-minute shows in rotating repertory, with Martinez staging both on the same basic platform set. They are works of research and imagination, with the playwrights inventing conversations between historical figures.

Diament’s Franz & Albert is the stronger of the two pieces. The Miami-based, Argentina-born journalist and playwright premiered the play in Buenos Aires last year, where it’s still running at Teatro El Tinglado, and his wife Simone Zarmati Diament has translated the script into English for the New Theatre production.

Franz & Albert imagines a conversation between a 28-year-old Franz Kafka and the 32-year-old Albert Einstein. The men did meet at the Prague apartment of Berta Fanta in April 1911, but the specifics of their interaction at that ongoing literary salon are unknown. So Diament has done his research and filled in the blanks.

The playwright imagines two vastly different men, not only in the specifics of their genius but in temperament. Einstein (Zack Myers), who walks onto Madame Fanta’s terrace after playing Mozart’s Sonata No. 2 on his violin, is an already-famous theoretical physicist who has just become department chair at German University. Kafka, the budding writer who would write his famous Der Verandlung (The Metamorphosis) a year later, is a lawyer being crushed under the weight of his day job at an insurance company.

Myers’ engaging Einstein is genial, optimistic, thrilled at his discoveries, resigned to the realities of his marriage. Leonard’s nervous Kafka is a physical and psychological mess, pessimistic, tormented, sexually frustrated, borderline suicidal.

Beyond the coincidence of having fathers named Hermann (Kafka’s was a tyrant), the men would seem to have little in common. But Diament conjures a conversation that roams from politics to paranoia, addressing guilt and cruelty and the destructive possibilities of Einstein’s theory of relativity. And whimsically, perhaps, he has the scientist give a name to a Kafkaesque nightmare.

Riley’s Footprints, though also grounded in solid research, is less intriguing, except perhaps for those interested in the early history of South Florida. The playwright focuses on writer and adventurer Kirk Munroe (a dashing Clint Hooper), a founder of the Biscayne Bay Yacht Club, and his writer-wife Mary Barr Munroe (the fretful Melissa Ann Hubicsak), who helped establish the Royal Palm Park (which became Everglades National Park), the Coconut Grove Library, the Tropical Audubon Society and the women’s group called the Housekeepers’ Club.

Set in the bayside Coconut Grove home the couple dubbed Scrububs, the play begins in 1887 and ends with Mary’s passing in 1922. The date of each scene is stated (projections would have taken care of that), and incidents that made up the pioneer history of the region become conversational fodder for the couple.

Through the years, they deal with loss, jealousy, wanderlust and the very real – sometimes deadly – challenges of pioneer life. Riley could just as easily have titled her play Scenes from a Marriage, given the tight focus on this pair of civic visionaries.

The set design for both plays, credited to Martinez, is simplistic, though the furniture and props for Footprints suggest class and period. Peter Lovello’s costumes also underscore period, but the multiple scenes in Footprints force some adaptive compromises in Hubicsak’s attire. Will Cabrera’s lighting subtly establishes mood, and Paul Steinsland’s sound design supplies Footprints with a vital sense of the wild world surrounding the Munroes’ home.

Doing a pair of two-character plays in repertory may have made economic sense to the New Theatre team, or perhaps it seemed a special way to mark the company’s anniversary. But neither production is a shining addition to a qualitatively variable body of work.