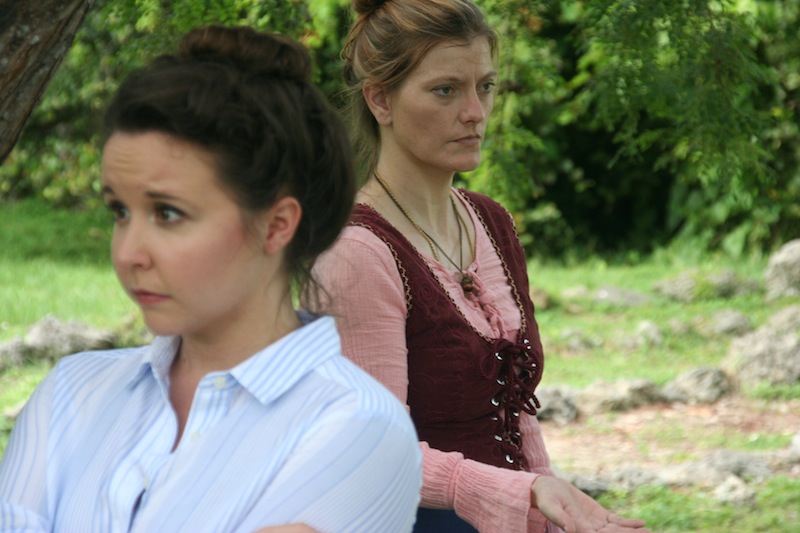 Many great plans have been sketched out and scrapped on bar napkins. It’s unique then to hear the story of one of South Florida’s newest theater companies, Lost Girls Theatre, whose co-founding artistic directors, Andie Arthur and Katie Siegel, found each other at a baby shower: “Somehow, between sharing appetizers and opening presents,” Arthur explains, “Katie and I got into a conversation about our shared love of Doctor Who – which then turned into a conversation about why don’t we see narratives with that sense of joy and wonder on South Florida Stages. I mentioned a couple of theaters in Chicago — where I’m from — that produce plays that invoke a sense of wonder, and she said, ‘Why can’t we do that?’”

Now, a couple of years later the company is set to debut their first full production, Juliet Among the Changelings, an original play penned by Arthur. Juliet is about a teenage girl exploring her identity, which seems like an appropriate opener for a young company fueled by a sense of discovery and imagination. We spoke to Arthur to find out more about the Lost Girls Theatre and the debut of Juliet Among the Changelings.

What is your personal connection to South Florida?

Arthur: I’ve been living in South Florida for the past decade and I’ve been the executive director of the South Florida Theatre League for a little over nine years. While I’m a transplant from the Midwest, Florida has been my home for about a third of my life.

Tell us about ‘Juliet Among the Changelings.’ What was the impetus for the play? One can’t help but think of ‘Romeo and Juliet.’ Is there any connection?

Unlike some other plays I’ve written, there’s a lot of little impetuses for Juliet instead of one big one. One is my longstanding habits is of reading young adult fantasy novels. I started as a kid and I’ve never grown out of it. What I love about the genre is that it’s full of very well developed female characters with agency – which is surprisingly lacking in a lot of more traditional literature and even in fantasy novels geared towards adults. There’s also a strong focus on creating interesting worlds that I really adore. The world of Harry Potter is a great example, but it’s consistent with the better works throughout the genre.

I just finished Maggie Steifvater’s The Raven King – which is the final book of a series set in a fascinating universe that blends a stark look at class issues with some incredibly mind-bending magic. As a playwright, I want to create these kinds of worlds in my work – and they aren’t the kind of the worlds that are often seen on South Florida Stages.

The other broader impetus is my fascination with Celtic fairy tales. Juliet Among the Changelings specifically riffs on the Scottish ballad of Tam Lin and myths around changelings. I find Celtic fairy tales to be dark and fascinating and to hit at places in the psyche that we don’t often think about. What if you weren’t really you, but rather a copy of yourself left in this world? In a lot of ways, it’s philosophy in story form.

And then the very specific impetus for this play came in a writing workshop I was in a very long time ago, where we all traded interesting prompts to other participants in the workshop, and I got the prompt, “A woman gives up her baby for magical powers.” I knew in that moment that I wanted to write about the baby. While Shakespeare is referenced a lot in the piece, the play doesn’t directly riff on Romeo and Juliet at all.

Tell us about your casting choices. I noticed you have a teenager in the lead. How did that come about?

We held open auditions and originally we were planning on casting slightly older actors who could play teenagers. And then we were blown away by Sofi [Duemichen] and Diana [Garle] in the audition process. There’s something really organic about seeing teenagers play teenagers. Sofi is a recent graduate of New World School of the Arts and Diana has been acting for a very long time, but they both bring a youthfulness that can’t be faked. You don’t realize how people’s energies change as they age until you notice the difference between an 18 year old playing a high school student and a 25 year old playing a high school student.

Tell us about how puppets are part of this production.

We’re working with Jim Hammond and Ronni Gerstel of The Puppet Network to create some Celtic-inspired shadow puppets for the play. They are the best of their field and we are humbled by the opportunity to work with them.

I notice that the other plays the company has produced possess fantasy or fantastical elements. Is this part of the company’s aesthetic?

Our mission is to create a sense of wonder – so all of our projects exist in a space of theatrical magical realism. I feel that theater is at its best when it is at its most metaphorical and not trying to replicate naturalism, which we can’t do nearly as well as television and film.

‘Juliet Among the Changelings’ is a young adult lesbian love story. Tell us about that.

While I do love young adult novels for consistently providing female characters with agency, they tend to be very hetero-normative. I wanted to create a love story in the mold of the genre, but one that specifically was between two young women. There’s such an absence of stories about lesbians in the young adult genre, as well as in theater in general. There’s a great Junot Diaz quote about how if you don’t see yourself in popular narratives you become a vampire – and I think young lesbians need to be able to see someone like them on stage.