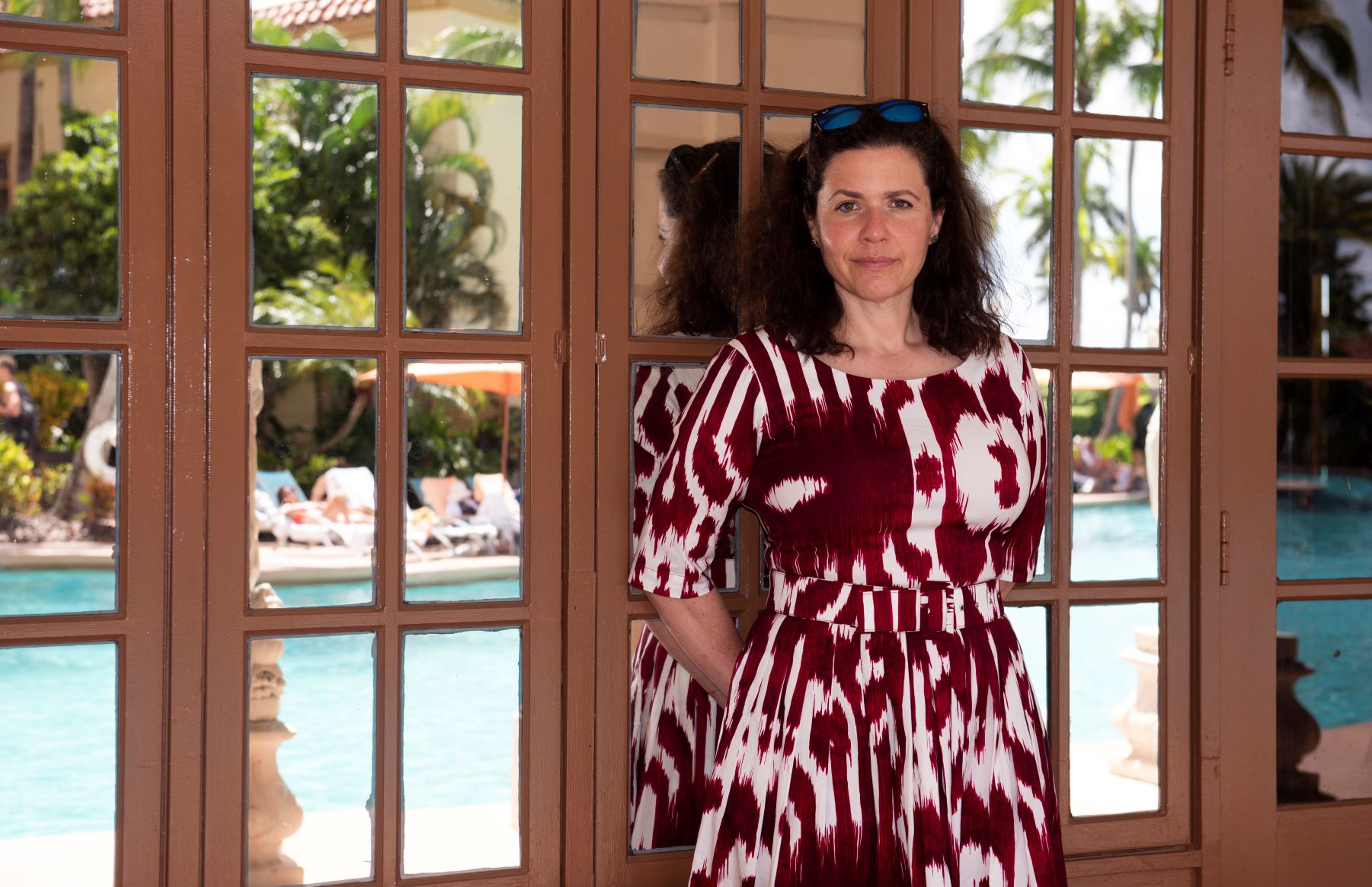 When Bari Newport was announced four months ago as just the second producing artistic director in GableStage’s 23-year history, she knew that among the many challenges facing her at the award-winning company, one was key.

“I was hired to scale the company up, to attract new audiences,” says Newport, who moved to South Florida after nine years at the helm of the Penobscot Theatre Co. in Bangor, Maine.

So while taking a deep dive into the arts and culture world of her new community – she estimates she has met with 415 people, individually and in groups, since March 1 – Newport has begun growing GableStage itself. Already, she has expanded full-time staff, increased the annual budget to $2 million, and added two more performances plus an extra performance day per week to each show’s run in the company’s 138-seat space at Coral Gables’ historic Biltmore Hotel.

“[Bari’s] commitment to audience development is directly related to her expressed determination to diversify and expand the reach of GableStage’s work, and her first season clearly signals this intention to broaden and deepen the company’s work here,” says Michael Spring, director of Miami-Dade County’s Department of Cultural Affairs (which helps support Artburst Miami).

Soon, about 20 months after the theater’s abrupt pandemic closure and the passing of its celebrated artistic leader, Joseph Adler, it will be showtime at GableStage again. 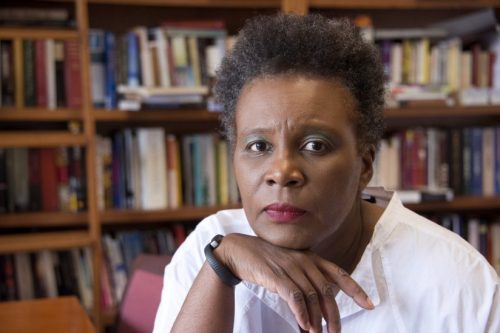 Prize-winning poet and playwright Claudia Rankine will be part of the new GableStage season with “The White Card.” (Photo courtesy of John Lucas)

With an eye toward serving the company’s existing audience and attracting new theatergoers, Newport has chosen her first season.

It’s an eclectic lineup featuring an American classic, a world premiere solo show, a play about racism by a MacArthur “genius” grant poet, a world premiere musical, a Florida premiere comedy, and a two-character piece by a Latina playwright, plus an add-on summer show starring and coauthored by Cuban-American film and television actor Ruben Rabasa. The majority of the pieces have been written or cowritten by women, and nearly all will be directed by them.

Before the season officially begins in mid-November, Newport intends to kick off her GableStage era with a (literally) splashy fundraiser. At 7 p.m. Oct. 28, the hotel’s famous 23,000-square-foot pool will become the setting for “SPLASH!,” a one-night-only event that will launch the memorial Joseph Adler Legacy Campaign to help finance the company’s growth. Ticket prices are still to be determined. Newport got the idea in February when she visited Coral Gables to tour GableStage and The Biltmore.

“Someone walked me around the pool and said, ‘This is where Esther Williams swam,’” says Newport, recalling the champion swimmer-turned-movie star. “I had a vision of an Esther Williams pool play, which sealed the deal for me about coming to GableStage.”

Williams headlined aquacade spectaculars at The Biltmore, and in a nod to that history, Newport has hired the Miami-based Aqualillies synchronized swimming troupe to perform as the audience watches from the terrace above. 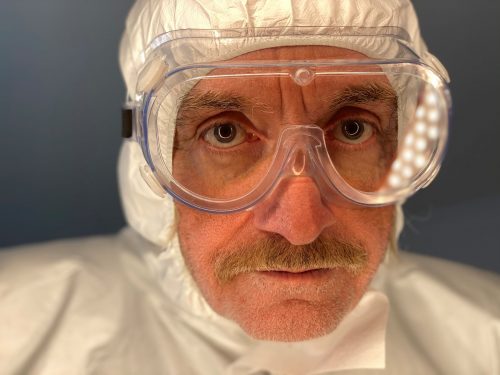 The season proper begins Nov. 12-Dec. 12 with Arthur Miller’s “The Price,” a 1968 drama about at-odds brothers and the rippling aftereffects of life decisions.  Miller’s play was about to open in March 2020 when the pandemic forced the theater to close as Adler was putting the finishing touches on the last production he would ever direct. After a long battle with pancreatic cancer, he died the following month.

“The set is still onstage,” Newport says. “I’m honored to have the opportunity to take Joe’s vision, to use his notes, and bring his vision to life the best I can.”

Although one actor from Adler’s cast was unavailable, the show will finally open with Patti Gardner, George Schiavone and Michael McKenzie, joined by Gregg Weiner. He, Gardner and Schiavone appeared many times at GableStage during Adler’s more than two decades there, becoming members of his informal acting company as well as valued friends.

“It was vitally important to me that whenever GableStage reopened, ‘The Price’ would be performed,” Gardner says. “It was Joe’s final piece of work, and I know he loved the play and rearranged his season so he could direct it.

“Along with her vast and varied theater experience, Bari brings such positive excitement to GableStage [that] you just want to ride her wave … Bari need not step into Joe Adler’s shoes – not possible, not necessary. She stands tall in her own. And I’m already convinced we’re so lucky to have her.”

After “The Price,” GableStage will present the world premiere solo show, “Joe Papp at the Ballroom,” on Dec. 17-31 in conjunction with the nonprofit YI Love Jewish. Starring Carbonell Award winner Avi Hoffman – and adapted by him and Papp’s daughter, Susan Papp-Lippman – the show about the founder of New York’s Public Theater is inspired by a one-night autobiographical piece Papp performed in 1978. Tony Award nominee Eleanor Reissa will direct the show, which revisits Papp’s Brooklyn Yiddish upbringing, political struggles and approach to the creative process.

Claudia Rankine’s “The White Card” gets its Florida premiere on Jan. 14-Feb. 13, 2022. The first published play by Rankine, an award-winning poet, MacArthur grant winner and Yale University professor, the drama centers around a Black artist-photographer and her increasingly confrontational relationship with a wealthy white liberal couple who run a foundation and collect African-American art. Atlanta-based director Lydia Fort, an Emory University assistant professor who has staged plays in New York and numerous regional theaters, will direct the play. 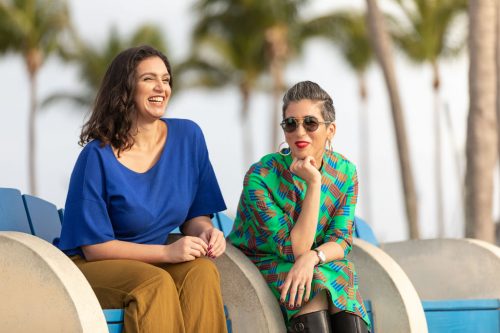 “Claudia’s writing is powerful, poetic, modern and accessible,” observes Newport. “The play doesn’t make anyone feel guilty. It’s illuminating … Each performance will have an audience engagement activity, though not all will be a talkback.”

“Me Before You,” a two-person musical with a book by playwright Janece Shaffer and music by Grammy Award winner Kristian Bush of the country-rock band Sugarland, gets its world premiere at GableStage on Feb. 25-March 27, 2022. In it, a couple wed 20 years find their marriage unexpectedly rocked by issues arising from the controversy-laden confirmation hearings for Supreme Court Justice Brett Kavanaugh.

Jessica Provenz’s “Boca,” which will get its world premiere in late July-August 2021 at Barrington Stage in Pittsfield, Mass., will have its Florida premiere at GableStage on April 22-May 22. The group of short comedies about life among Boca Raton’s retired set will be directed at GableStage by Barrington Stage founder and artistic director Julianne Boyd, who staged the world premiere of Miami playwright Christopher Demos-Brown’s “American Son” at her theater in 2016.

GableStage’s final subscription offering for 2021-2022 is Tanya Saracho’s “FADE,” a play about a Hispanic novelist hired to write for a TV show and her evolving relationship with a Latino janitor. Actor-director-playwright Teo Castellanos will stage the dramatic comedy about class and culture, which will run June 3-July 3.

“Joe had the rights and intended to do it,” Newport says. “I wasn’t familiar with the play, but when I read it, I really loved it.”

Next summer, GableStage will offer its audiences an add-on production, the world premiere of “Rubenology,” set for July 14-31, 2022. Originating with Vanessa Garcia and Victoria Collado’s Abre Camino Collective, the play is a solo show starring the 83-year-old, Cuba-born Rabasa. With a script by Rabasa and Garcia, the piece touches on myriad aspects of the actor’s life, his career in film and television, his experiences in Cuba and the United States.

“I hadn’t known about him until I saw the online shorts produced by Abre Camino,” Newport says. “What a life he’s had! His is such a ‘coming to America’ story.”

Newport says she is “still on the deep dive” that has led to her first season and to connections with such a wide variety of the region’s cultural figures. She’s planning a three-day meet-and-greet at the end of August so that any theater artist who wants to can come by for a short meeting with her. 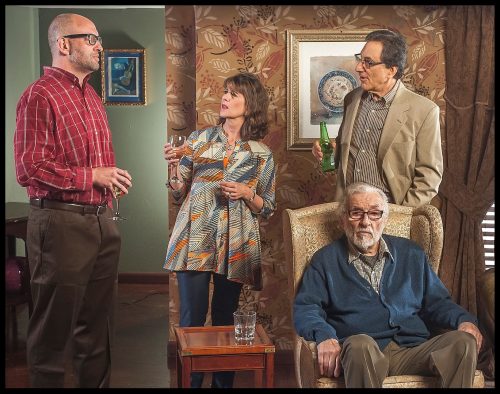 From left, Gregg Weiner, Patti Gardner and George Schiavone (seated), shown with David Kwiat in GableStage’s “If I Forget,” which will launch the new season in “The Price.” (Photo courtesy of George Schiavone)

Actor Alex Alvarez, who met Newport first via Zoom and then in person, says, “She’s engaging in honest conversations with people in the community about what’s worked for them and what hasn’t. She’s listening … she’s also looking to honor the legacy of GableStage with theater you can really think about … [the GableStage audience expects] to debate, agree, disagree, argue, talk …

“You know, she left a secure position in Maine. She was happy. She didn’t have to leave. But her courage and nerve brought her here. Those are Joe Adler qualities, right? Into the fire.”

After serving as Adler’s executive assistant from 2013 until the director’s passing in 2020, Alex Martín has rejoined the company as artistic administrator under Newport. Martín has spent the months since her arrival working alongside her and observing her style, which he calls “candid, quick, intelligent.”

“Bari really likes to get to know people’s motivations, not just their job role as listed on a document … I’m deeply excited by some of the behind-the-scenes projects and possibilities she’s begun just by always asking others what they wish they could do,” he says. “We’re working on projects that will enmesh us more deeply with the greater community – new playwrights, exploring new locations, discussing what collaborating with other groups would look like.”

Newport’s coalescing vision of making theater at GableStage involves creating an ongoing company of actors, designers and other theater artists; serving multicultural audiences with plays that confront issues and ideas; making theater that becomes “a reconstitution of how you fit into the world.”

She hopes that working with other South Florida artists may lead to a different way of thinking about theater here.

“We’ve been forced to have a scarcity mentality when it comes to audiences, money, space, resources,” she says. “What if we’re all part of something larger? I believe in the importance of GableStage in the larger American theater ecology.”

GableStage is in The Biltmore Hotel, 1200 Anastasia Ave., Coral Gables. The new 2021-2022 season has been scheduled to start in November. Subscriptions range in price from $180 to $350 and single tickets cost $35 to $65 (plus a $5 processing fee). Subscriptions are currently available for purchase online. Single tickets go on sale Sept. 20, with discounts available for groups, students, Biltmore employees, artists, military members and families. For more information on showtimes, visit GableStage.org or call 305-445-1119.