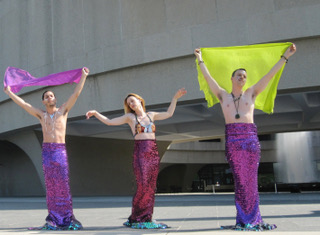 My Barbarian wanted to take Miami on a boat ride. “We wanted to interact and be out in the public,” Alex Segade reveals over the phone from Los Angeles, where he just got out of rehearsal for My Barbarian’s first Miami show, coming up this Saturday at the Miami Light Project, as part of Miami-Dade College’s Museum of Art and Design’s “Living Together” performance series this season.

Though new to South Florida, Segade and his collaborators, Malik Gaines and Jade Gordon, have been bringing their bawdy, yet brainy, brand of performance art/musical theater/dance party to all the art world’s best shows for 18 years.

For a 2015 commission by the Los Angeles County Museum of Art, My Barbarian created Double Agency, an artworld version of the Mission Impossible television series, where museum curators and tour guides act as spies engaged in a dangerous game of decoding the meaning of great artworks. In one hilarious episode, Gaines is disguised as a nude, flute-playing faun who tries to thwart Segade’s character’s attempt to infiltrate the “elite Non-White Commission on European Beauty and Excellence.”

For the Whitney Biennial in 2014, My Barbarian reenacted excerpts from the 1994 MTV Real World: San Francisco, featuring former Miami resident Pedro Zamora as he bravely changed audience views about people with AIDS. My Barbarian enlivens its deliberately deadpan delivery of the dialogue among Zamora, his wary roommates, and season douchebag Puck, with club-worthy dance numbers that lift lyrics from a critical essay by the late Hialeah-bred queer theorist José Esteban Muñoz.

For its Miami debut, My Barbarian is repurposing “Voyage of the White Widow,” a performance commissioned by the gallery De Appel, in Amsterdam, 10 years ago. “We decided this year we would revive older pieces,” Segade explains. So “Bride of the White Widow,” he jokes, “is a sequel, like Bride of Frankenstein.”

In both the Miami and the Dutch versions, My Barbarian plays sailors on a ship during the so-called Age of Discovery. A girl joins the crew disguised as a boy. As the captain, Segade confronts a mutiny, while perhaps abducting human cargo from West Africa or plundering the “New World” of gold. (“I can’t tell you everything,” Segade teases).

As Segade recalls, creating the Dutch performance began with “conversations about myths around first contact and historical events such as the slave trade.” Then the trio incorporated ideas from Dutch thinker Johan Huizinga, who “looks at how play happens in cultural performance, like law and war.” This idea of culture as play “helps us structure the action” of the performance. That idea also opens up “a lot of opportunity for the audience to interact,” he continues, even promising that one lucky audience member in Miami will win a $100 cash prize by the end of the evening.

When planning the sequel, My Barbarian’s vision of performing this piece on the high seas gave way to the reality.“The boat would have been rad,” Segade muses, “but there were things that would be hard to do on the yacht and it would be a small, small audience.”

So My Barbarian took a “virtual tour” of the Miami Light Project’s warehouse in Wynwood and mapped out a mobile performance. The voyage will take the audience from a “ballroom dance” experience in the Light Box theater to a video installation flashing images of Empire in the adjacent white-curtained gallery, to a “party beach resort” in the parking lot, which, Segade promises, will offer entertainments such as a “wet underwear contest” before ending in a “climate disaster.”

In place of the solemn beauty of the paintings of the masters of the Dutch “Golden Age,” My Barbarian is exploring here what they consider to be an “aesthetic of Miami.”

On visits to the Magic City, “for the art fairs and other times,” Segade observes, “we were always attracted to that space between Art Deco and Versace, and to all the Latin cultures and Caribbean cultures there.”

However “Bride of the White Widow” is adapted for the Miami show. Hopefully, My Barbarian will keep the club song “Golden Age.” In a video the group posted nine years ago, the trio, dressed as sailors, leads the audience through a dance sequence that mimes “hands in chains,” “work[ing] the mines,” “cook[ing] and serv[ing],” and finally, “drop[ping] down low like you got no soul,” before posing the question in the chorus: “Who put the gold in the Golden Age?” (https://vimeo.com/1460691)

If the aesthetics might shift, Segade suggests that the White Widow’s political themes have grown even more urgent in the years between 2008 and 2018. “It’s about power, empire, masculinity, historical atrocities, and racist policies,” Segade observes. “What’s there to change in that?”

for more information and tickets.