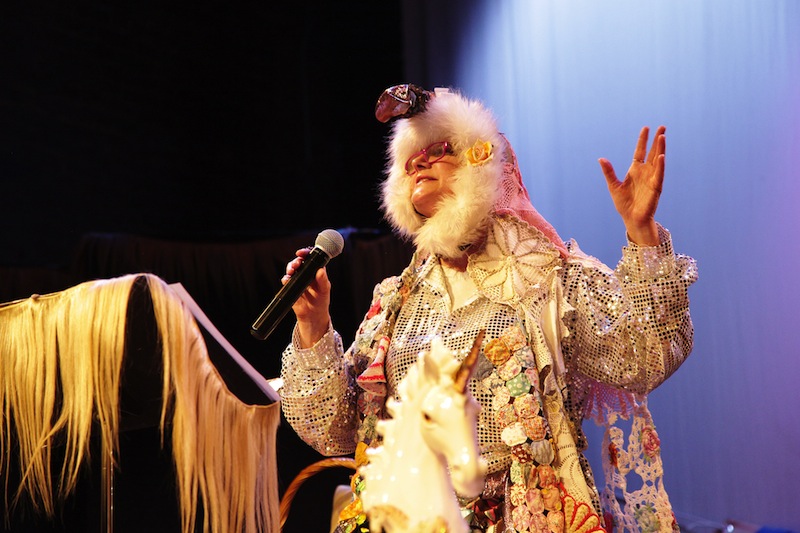 The time seems right for Karen Finley to be visiting Miami, to be performing in the black box space of the Miami Light Project at the Goldman Warehouse, and to present her latest performance-art manifesto about the current political landscape, “Unicorn Gratitude Mystery.” In the show, which she began developing as a response to the U.S. presidential election in 2016, Finley plays a unicorn that morphs into a Hillary Clinton-like, Donald Trump-like being, all wrapped up in the witty, satiric art that has made the New York-based artist a free-speech legend.

Finley’s appearance is the first presentation of the Museum of Art and Design (MOAD) at Miami Dade College’s “Living Together” series. Rina Carvajal, the executive director and chief curator of MOAD, and the curator of the series, says Finley as the kick off couldn’t be more fitting.

“We now have a different mission,” Carvajal says of the MOAD, whose space inside the historical Miami landmark the Freedom Tower is currently under a major renovation. “’Living Together’ is part of an initiative called Museum Without Boundaries, where we want to extend the conversation beyond the institution, and to create a conversation that involves everyone and every discipline,” says Carvajal.

The cross-disciplinary series of programs are an effort, as Carvajal explains, to galvanize Miami audiences with thoughtful and challenging performances and exhibitions that draw from art, music, theater, politics, and poetry. There are 17 events scheduled by national and international artists, art collectives, musicians and writers, beginning Jan. 12 with Finley’s performance and continuing through September 2018.

“We are presenting in venues across Miami in collaboration with many different groups. Some of the performances may be in downtown, some may be in Miami Beach, while others could be in Hialeah,” says Carvajal. “Whatever makes sense and is interesting to further the role of arts, and that is to connect people.”

The series’ presentations in April coincide with the reopening of the renovated museum at the Freedom Tower, with British-German artist Tino Sehgal in “The Situation,” where unscripted interactions with visitors yield musings on topics both economic and existential beginning April 7. On April 21, Brazilian artist Anna Maria Maiolino posits questions about the present by revisiting a major work from the past.

A video installation by the great South African artist William Kentridge, from May to September, celebrates, in darkly comic fashion, resilience and life.

Finley’s work is the one that opens wide the idea of artist as a conduit to conversation. “To have the artist as a historical recorder, that’s what my job is,” says Finley. “It’s interpreting events that are happening in society and culture through an artist’s lens, and then giving these deeper meaning to offer an understanding of where we’re going to go and how we’re going to move forward.”

Finley uses the phrasing “understanding through humor instead of shock and awe” about the piece she’s bringing to Miami, “Unicorn Gratitude Mystery.”

“I began the show in New York,” explains Finley, “and it was a response to, at that time, the issues that were connected to what was leading up to the actual election. So, there’s talk about the sexual dynamics of the Clinton-Trump race. It looks at gender disparity, and, of course, abuse of power, and the desire for power.”

Then things took a different turn. “After Trump won, it was something we weren’t expecting, and that added yet another dimension.” She dons orange wigs, red “Make America Great” caps, pantsuits, and makes references to Monica Lewinsky’s famous blue dress.

“I have this moment in ‘Unicorn’ where I imagine what it would have been like for Hillary to go back to the Oval Office, where there was that encounter, and now, there she is in this power seat.”

“Unicorn Gratitude Mystery” didn’t begin as a look at the two presidential candidates, one female, one male. No, it began with the unicorn, what she says is a symbol of the sacredness of whiteness. She references the neo-liberal spaces of whiteness – walking down an aisle at a holistic supermarket, or getting worked up when waiting in line for a latte — “the displacement of the ridiculousness of these capitalist consumer spaces of neo-liberalism.”

She considers, too, that in today’s climate, even having fun is a political statement. “Well, isn’t it?” says Finley, who became known as one of the “NEA Four,” when her grant from the National Endowment for the Arts was vetoed, along with three other artists, on the basis of subject matter in 1993. The case made its way to the Supreme Court and is now in the legal books as NEA vs. Finley.

“There will be tears and hilarity,” Finley promises about “Unicorn.” “The humor here is a way for us to get our minds around the complexity of spaces that maybe we don’t even want to look at.”