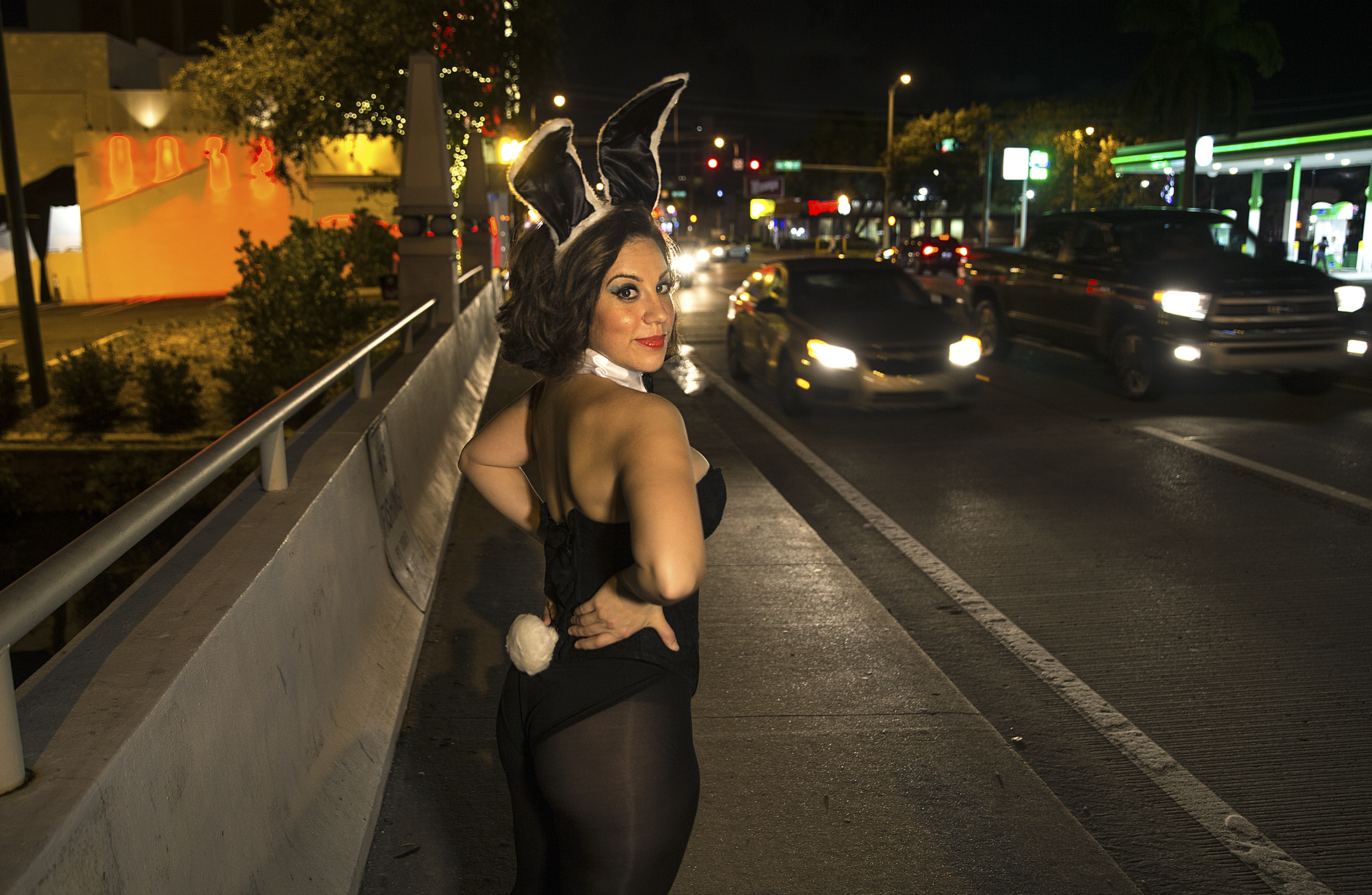 No one knows all the real-life drama that unfolded at the once-swanky, now ready-to-be-renovated Gold Dust Motel on Biscayne Boulevard after its grand opening 61 years ago this month.

But thanks to the drive of Juggerknot Theatre Company producer Tanya Bravo, the arts-welcoming attitude of Gold Dust developer Avra Jain and the research-grounded creativity of playwright Juan C. Sanchez, anyone who checks out “Miami Motel Stories: MiMo” in its run through Dec. 23 will be entertained and moved by this immersive slice-of-life look at the people who might have occupied the Gold Dust through six decades that brought vast changes to the neighborhood.

First, an explanation of how “Miami Motel Stories” works.  Theatergoers – and for this, as in Juggerknot’s first edition last year in Little Havana, ticket buyers skew much younger than the average theater audience – buy a ticket to one of three color-coded “tracks” (pink, yellow or blue). Each ticket allows a tiny audience of four people at a time to watch three of the nine scripted motel-room plays, each running around 10 minutes or a bit more.  A bellhop escorts each group to a door, and at the sound of a bell, you enter and watch the play.  At the end, the bellhop opens the door, directs you to step outside, then takes you to your next room.

You can skip the plays altogether and buy a less-expensive ticket allowing you to roam around the motel’s first floor along the Little River.

There, you interact with the motel’s owner/managers the Wades (Clint Archambault and Susie K. Taylor), a bookie (Gregg Weiner, who will give you a shot of Chivas if you beat him at cards), an anti-preservation commissioner (Vanessa Elise), a fisherman (Luckner Bruno), a bartender (Jeff Quintana), a waitress (Coley Campany), a feminist (Thiana Berrick) and a pair of disruptive teens (Adam D. Crain and Brandon Hoffman).  The first-floor experience involves scripted material and improvisation, and it ends with a short dance party (and a drink) to celebrate the Gold Dust’s 1957 grand opening.

But if you buy a color-coded “key,” you get three plays and the first floor experience.  And those plays are the heart of what makes “Miami Motel Stories: MiMo” so richly significant.

Staged by Brooklyn-based director Mia Rovegno, a veteran of many a site-specific immersive theater experience (with an assist from Tai Thompson this time), Sanchez’s plays vary in tone and substance.  Each room holds a story from a different era, ranging from 1959 to 2015; as you sit on a vintage Miami Transit bus getting instructions before your experience begins, a bellhop mentions that the Gold Dust is in “a state of self-reflection.”  Then the characters briefly pop out of their rooms to deliver a unifying movement sequence choreographed by Octavio Campos, and each theatergoer’s unique journey begins.

The yellow track features a 1959 honeymooning couple, Steve (Stephen Kaiser) and Sylvia (Monica Lynne), whose journey to the Magic City proves fatal to their relationship.  But because it’s staged like a 1950s sitcom, “Golden Age Couple” comes across as the least authentic piece.

Much more moving is a play about a prostitute named Linda (Aubrey Shavonn Kessler) and her john Wally (Zachary Myers) circa 1976.  He’s a nervous married man. She’s a no-nonsense woman who says she’s married but needs to turn tricks to pay the bills (there’s an eviction notice tacked to her door).  This one is layered and poignant, ending with the aching sound of Linda Ronstadt singing “Blue Bayou.”

The other yellow track play is “Cuban Boxer,” set in 2003, and it’s among the most unnerving of the nine. Daniel Gil plays Rene, a boxer whose dreams of glory have been pounded by drugs and 52 arrests.  His room is trashed, hot (it’s the only one without a working air conditioner) and creepy.  His play is one long drug-fueled rant, mixing memories, regret and rage.

The pink track features another solo show titled “Cecil.” It’s 1993, and after living on the neighborhood streets for 10 years, Cecil (Chat Atkins) is three months sober and staying in a government-paid room at the Gold Dust. His room is wallpapered with pages from the Bible, his dresser top a repository for pictures and statues of Jesus.  But Cecil, it’s clear, is troubled and never far from his old life, his sobriety a fragile thing.

In another room, it’s 1966, and a Playboy Bunny named Stella (Sandi Stock) has hopped into bed with Matt (Cliff Burgess) a detective who travels the country making sure the clubs’ fantasy women don’t violate the strict policy about not sleeping with the customers.  Stella, who has come from nothing, is scared to death that Matt will turn her in. He swears he’s sweet on her, that this is different – but is it?

The third pink track play is “Runaway Youth and Mom,” set in 1995.  Dwayne (Phillip Andrew Santiago) is a 17-year-old hustler who regularly turns tricks along Biscayne Boulevard.  His angry mom Evie (Carey Hart) bursts into his room with food, cursing at him for shaming her, begging him to come home.  She says she’s found a pastor who can change him. She also notes that “AIDS is real.” The standoff between mother and son is raw and painful to watch.

The blue track features plays ranging from 1961 to 2015.  In ’61, a Gold Dust resident named George (Victor Valdeon) finds a CIA employee named Edward (Carlos Alayeto) pounding on his door.  Seems George has plans to blow up things in Cuba and has requested permission to purchase large quantities of dynamite. Edward, every inch the tough G-man, bursts George’s secret-operative fantasies and makes it clear he’s playing with dynamite.

“Veronica,” arguably the most intensely moving piece, features a transgender woman (June Raven Romero) in 1983. Her sexy outfit is splashed with blood, as are the sheets on her bed.  Agitated, she calls a friend who doesn’t answer, then calls her abuela.  Between calls, she sings plaintive bits of “Memory” from “Cats,” “Tomorrow” from “Annie” and “At the Ballet” from “A Chorus Line.”  Delivering both sides of a conversation between herself and a cop, her story emerges: How earlier that evening, a man picked her up, took her to Bayfront Park and tried to assault her, only to wind up in Jackson when Veronica picked up one of the many needles littering the ground.

The 2015 “Influencer Couple,” Carla (Bianca Garcia) and Carlos (Robert Alaya) have come to Miami from New Jersey for a glam vacation. But he has booked them into the now-rundown Gold Dust, where Carla senses fungus on the walls, and she begins fantasizing about dumping him for Pitbull.  But a surprise proposal, with Carlos dancing in his boxer briefs, changes everything, as Carla asks someone in each four-person audience to shoot the moment on her phone so her thousands of Instagram followers won’t be denied even one intimate moment.

The design team for “Miami Motel Stories: MiMo” – scenic designer Li Milian and assistant Lee Harrison, lighting designer Ana Maria Morales, sound designer Sarah Vingerhoedt and costume designer Karelle Levy – have steeped the rooms and other spaces in era-appropriate authenticity.  That’s even more impressive when you consider that the Gold Dust is otherwise in the initial phase of the restoration process.

What might be tweaked for the upcoming North Beach and Overtown editions of “Miami Motel Stories?” On the first weekend at the Gold Dust, the check-in process was cumbersome and not terribly friendly, with the audience forced to wait in a holding-area lobby before going out into the courtyard with a bar, vintage cars, that historic bus and restroom facilities.  And for opening weekend, programs hadn’t arrived from the printer. It’s meaningful for the artists and the audience to have a record of which actor played which role, who created that world, and so on.

Overall, though, “Miami Motel Stories: MiMo” is a time-traveling adventure unlike anything else in South Florida theater. It’s worth checking in and checking it out.