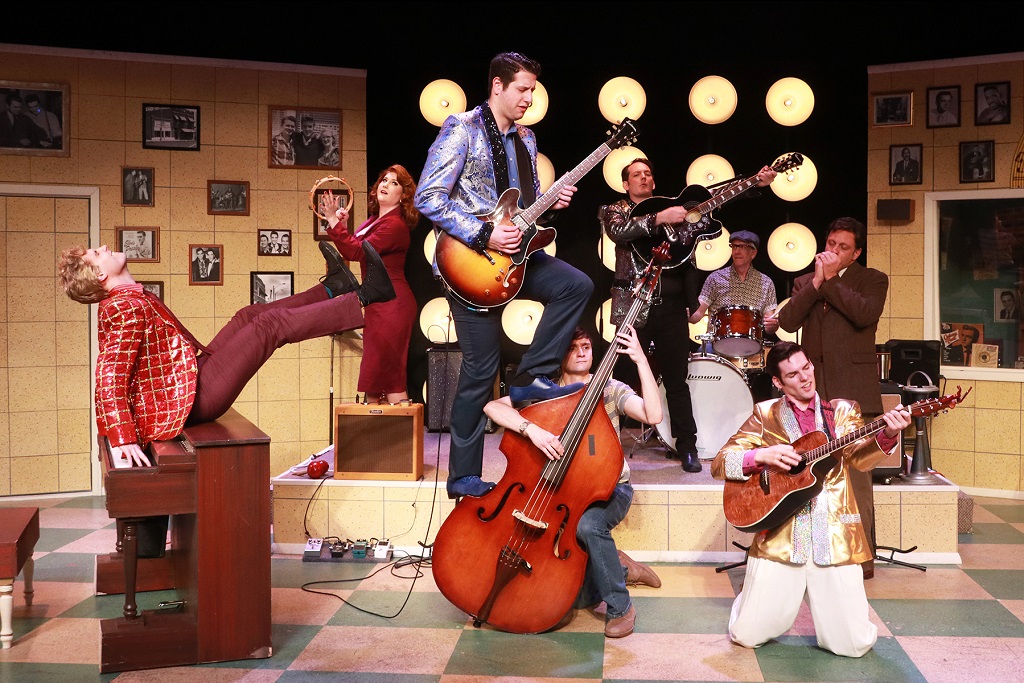 Though it was but a brief moment in rock ‘n’ roll history, an impromptu recording session at Memphis’ Sun Records on Dec. 4, 1956, has lived on and on and on.

That was the day that Sun founder Sam Phillips planned to record some new songs with “Blue Suede Shoes” singer-songwriter Carl Perkins. Jerry Lee Lewis, who would soon become a huge star, was hired as session pianist and backing vocalist.  But then Johnny Cash appeared, and so did mega star Elvis Presley. The four started singing, Phillips got tape rolling, and the entertainment editor of the Memphis Press-Scimitar stopped by with a photographer.

The next day, a story with a photo of the music legends dubbed them the “Million Dollar Quartet.” From 1969 to 2006, four different versions of material from the recording session were released – 46 tracks in all.

In 2006, Colin Escott and Floyd Mutrux debuted the early version of their musical “Million Dollar Quartet” at the Seaside Music Theater in Daytona Beach. The show was further refined, journeyed to Broadway and London, toured nationally, got produced regionally and became a multimillion-dollar jukebox musical success.

Actors’ Playhouse in Coral Gables cashed in on the still-potent appeal of the four legends and their music when it produced “Million Dollar Quartet” for a months-long run in its 2016-2017 season. Now, the boys (and Elvis’ girl) are back for another round in the cozy Balcony Theatre upstairs at the Miracle Theatre.

And once again, there’s a whole lotta shakin’ – and great music-makin’ – going on.

“Million Dollar Quartet” is a blend of theater and concert in which the ‘50s hits and a few gospel numbers are played live by its multitalented cast. The actors playing Cash, Perkins, Presley and Lewis don’t just verbally tussle and sing in the style of the music stars they’re portraying. Along with drummer David Sonnenborn and bass player Daniel Bailey, they’re excellent musicians who do the quartet’s  songs proud.

Director David Arisco has brought back Jeremy Sevelovitz as the moody Perkins, a man still seething about Elvis’ cover of his smash “Blue Suede Shoes;” Sky Seals as Cash, a star about to jump ship from Sun to Columbia Records; and live-wire Dominique Scott, who won the Carbonell Award for his earlier performance as the cocky and provocative Lewis. Scott, who literally bends over backwards to pound the piano, also serves as the production’s musical director. Lindsey Corey, playing Elvis’ gal pal of the moment Dyanne, also returns to contribute a sultry “Fever” and a rockin’ “I Hear You Knocking.”

New to this second Actors’ Playhouse production are Corbin Mayer as the hot young Elvis and Gregg Weiner as Sun founder Phillips, the guy who sold Elvis’ contract to keep his company afloat. Narrating and interacting in scenes, his voice tinged with the sounds of the south, Weiner brings a warmth to his portrayal of the early music mogul, conveying just how much Phillips dug the talent in his studio.

Each of the vocalists delivers solid, inspired renditions of the show’s cavalcade of hits.

Mayer’s Elvis croons “Memories Are Made of This,” sings “That’s All Right Mama” and “Long Tall Sally,” then tears it up with “Hound Dog.” Sevelovitz, a great guitar player, brings a rockabilly flavor to Perkins’ “Matchbox,” “Who Do You Love?,” “My Babe” and “See You Later Alligator.”

Seals infuses Cash’s deep-voiced gravitas into “Folsom Prison Blues,” “Sixteen Tons,” “I Walk the Line” and “Riders in the Sky.” Scott is a charismatic musical maniac as Lewis, as much contortionist as pianist, delivering “Real Wild Child,” “Great Balls of Fire” and “Whole Lotta Shakin’ Going On” with Lewis’ look-at-me abandon, then slyly getting under Perkins’ skin at every opportunity.

If you missed Actors’ “Million Dollar Quartet” the first time around – or if you saw it and loved it – here’s a fresh chance to rock on with the greats.