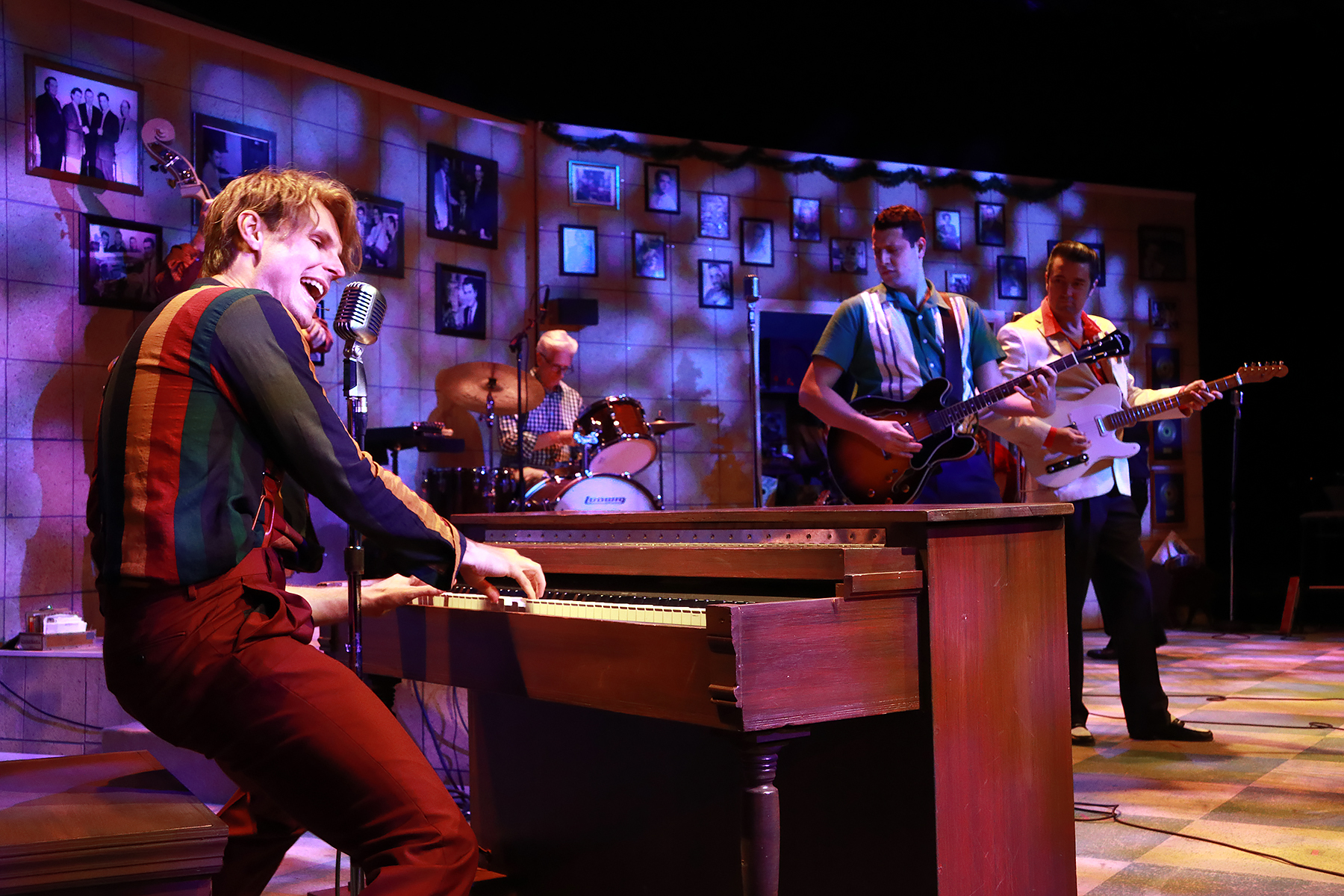 An impromptu jam session by four future Rock and Roll Hall of Fame giants has become one of those showbiz gifts that keeps on giving.

On Dec. 4, 1956, Sun Records founder Sam Phillips wanted to record some new tracks with Carl Perkins, whose “Blue Suede Shoes” had been a hit for Perkins and  Sun superstar Elvis Presley.

Phillips brought in the young Jerry Lee Lewis to play piano on the session. And then two other Phillips stars – Presley, whose contract had been sold to RCA to keep Sun Records afloat, and Johnny Cash, who was about to jump ship to Columbia Records – came by the Memphis studio. 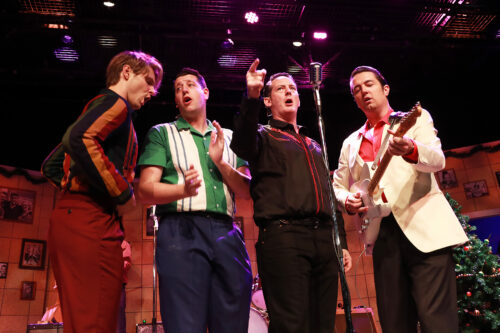 When the four started jamming, the Sun engineer pressed “record,” and a one-time-only group dubbed the Million Dollar Quartet made a piece of music history.

In 2006 at the Seaside Music Theatre in Daytona Beach, that night and those stars spawned “Million Dollar Quartet,” a piece of musical theater jam-packed with hits.  The show would go on to a major production at Chicago’s Goodman Theatre in 2008, to Broadway in 2010, Off-Broadway, London, a tour and productions at theaters all over the United States – including two by Actors’ Playhouse in Coral Gables.

With the smash success of those 2016 and 2018 productions at the Miracle Theatre, it’s no surprise that Actors’ Playhouse and artistic director David Arisco would go back to the “Million Dollar” well to kick off the company’s 35th anniversary season.

While the new show, “Million Dollar Quartet Christmas,” isn’t precisely a sequel – it takes place on the same night as the original, because Elvis, Johnny, Carl and Jerry Lee got together just the one time – it serves up a fresh collection of songs linked by a different story.

The music, as anyone in the delighted Actors’ audience would tell you, is sung and played to a fare-thee-well by talented actor-musicians who have been part of one or both of the company’s “Million Dollar Quartet” productions. 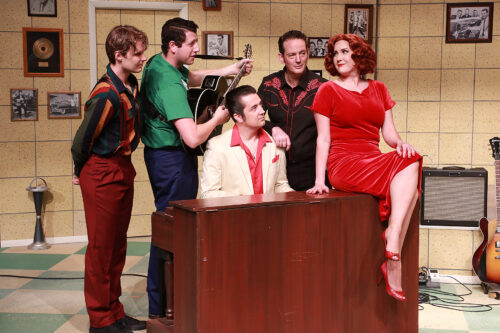 Colin Escott’s new book, however, pales in comparison to his Tony Award-nominated original (he co-wrote the first one with Floyd Mutrux).  All of the really good stuff about these stars, Sam Phillips, Sun, jealousies, betrayals, gossip – that was all used in “Million Dollar Quartet.”  Escott has struggled to construct a story that isn’t half as compelling, and no amount of finesse on the part of the performers and Arisco can disguise that.

Fortunately, at least with this particular show, theatergoers aren’t focused on listening to the characters talk to each other. They want to hear the music, the hits, Elvis singing “Blue Christmas,” thank you very much. And they do. 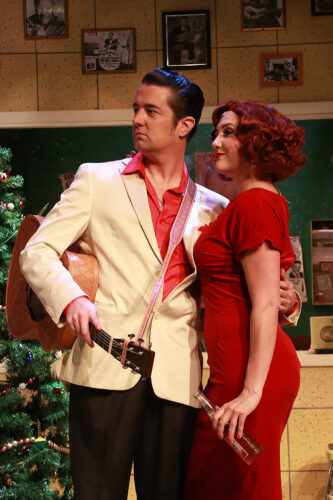 Eddie Clendening, who played Elvis on Broadway and in the first Actors’ production, is back as the King, again with a sultry singer named Dyanne in tow (Lindsey Corey, here a redhead in a fits-like-a-glove red velvet dress).  Sky Seals is back as Cash, Jeremy Sevelovitz as Perkins, with David Sonneborn on drums and Jonny Bowler on bass.  Gregg Weiner has returned as Phillips, whom he first played at Actors’ in 2018.

Solos, duets and songs by the cast as a whole flow like spiked eggnog at a company Christmas party.

Clendening’s Elvis croons “Don’t Be Cruel,” a yearning “I’ll Be Home for Christmas” and sings a lovely duet with Seals’s Cash on “Silent Night.” Seals sends a happy jolt through the audience with “Ring of Fire,” and Sevelovitz’s Perkins blazes on guitar as he sings “Cotton Top.”

Scott, playing the controversial rock ‘n’ roll legend who passed away just last month, is a wild man as Lewis, singing “Chantilly Lace,” “Boogie Woogie Santa Claus,” “Bad Kid,” then easily topping himself more than once during the concert-style finale. 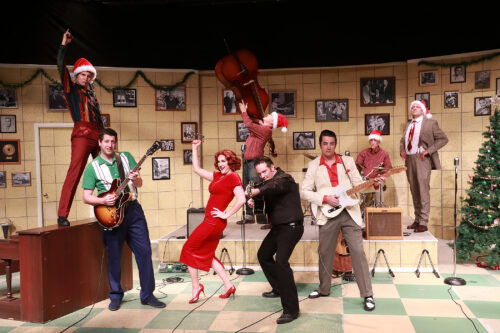 Corey adds vocal spice with a sultry “Santa Baby” and other tunes, but her mission appears to be slinking around the studio and draping her arm over this musician or that one.  Her talented, charismatic Dyanne deserves more. Weiner plays Phillips in a pleasant, low-key way rather than as a music pioneer facing the loss of stars he helped create.

In going back to the creative well, “Million Dollar Quartet Christmas” doesn’t deliver as reliably as its predecessor.  But it is a rollicking holiday mood-enhancing experience for music lovers looking for a different way to get into the spirit of the season.

WHERE: Actors Playhouse in the Balcony Theatre at the Miracle Theatre, 280 Miracle Mile, Coral Gables

COST: $40 to $125 (seniors 65 and over get 10 percent off weekdays only; students 25 and under with valid student ID pay $15 for a rush ticket available 15 minutes before a weekday performance)