‘Million Dollar Quartet’ a Musical Bang for the Buck 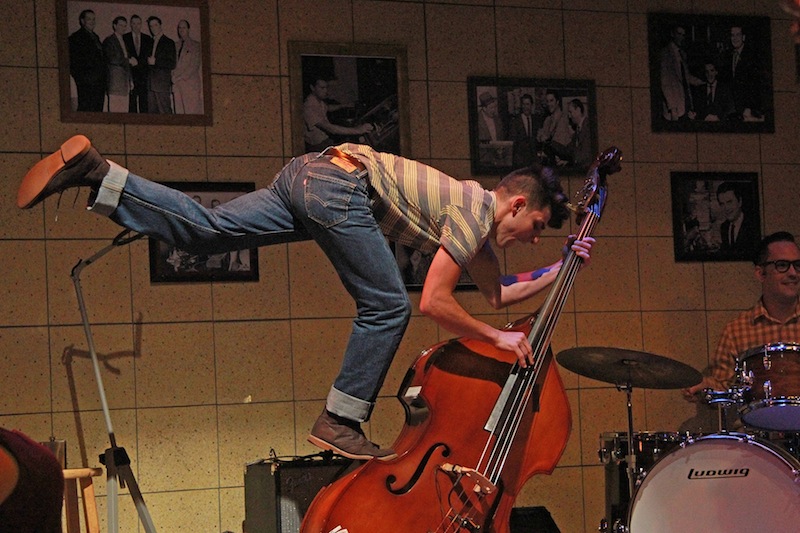 When music pioneers Carl Perkins, Jerry Lee Lewis, Johnny Cash and Elvis Presley met up and jammed at Sun Records in Memphis on Dec. 4, 1956, their session was really nothing more than a happy creative accident.

Sun founder Sam Phillips wanted to record some new songs with Perkins, whose “Blue Suede Shoes” had been a history-making hit for himself and Presley, to Perkins’ seething anger. Phillips hired wild-child piano player Lewis to work the session. Cash, a star who had yet to tell Phillips that he was planning to jump from Sun to Columbia Records when his contract was up, came by to listen to Perkins record. So did Presley, whose contract Phillips had sold to RCA in order to keep Sun in business.

With tape rolling, Phillips captured his lost superstar and the three other singer-musicians as they worked through rock ‘n’ roll, country and gospel songs. The entertainment editor of the Memphis Press-Scimitar came by with a photographer, whose now-famous image of the four music greats ran in the next day’s paper with a story dubbing them “the Million Dollar Quartet.” From the late 1980s to 2006, various recordings from the session were released.

And in 2006, in Florida of all places, “Million Dollar Quartet” became a musical.

Over the past decade, the show created by Colin Escott and Floyd Mutrux has made its way from Daytona Beach to regional theaters, a 2010-2011 Broadway run, London and national tours.

Now it’s back, opening the Actors’ Playhouse season in the Miracle Theatre’s intimate upstairs Balcony Theatre space – a space that can barely contain all the talent on its stage.

Artistic director David Arisco has tapped a quartet of triple-threat actor-singer-musicians to play the “Million Dollar” stars, all of whom have appeared in other productions of the show.

Eddie Clendening originated the role of Elvis Presley in the Broadway production,and here he is rocking out on the Balcony stage. Sky Seals as Johnny Cash, Jeremy Sevelovitz as Carl Perkins and New World School of the Arts grad Dominique Scott as Jerry Lee Lewis bring their individual experiences with “Million Dollar Quartet” to this new cast, and the result is musically sizzling.

Manny Schvartzman, the show’s musical director, is now off playing the keyboard in Slow Burn Theatre’s “The Hunchback of Notre Dame” at the Broward Center.But as Elvis might have said, he got these cats ready before he left. “The Million Dollar Quartet” is as much concert as theater, and Clendening, Seals, Scott and Sevelovitz (plus drummer Andy Davis and bass player Adam Egizi) form an excellent, tight band.

Set designer Gene Seyffer has created a sunny yellow rendition of the Sun Records studio, the place where the magic happens and the domain of Jim Ballard’s Sam Phillips. Ballard, a Carbonell Award-winning actor, serves as the show’s narrator as well as playing the southern music mogul who tends to call his stars “boy” and is so clueless about Cash’s plans that he has prepared a lengthy Sun contract extension for the man in black. (And, side note: Phillips doesn’t really sing in the show, except for some backup vocals, which is too bad, since Ballard has a great voice.)

Carbonell winner Lindsey Corey plays Dyanne, Presley’s girlfriend of the moment, contributing a sultry rendition of “Fever” and a rocking “I Hear You Knocking.”Her character is dramatic license on the part of Escott and Mutrux – the woman Elvis really brought to the session was a dancer, not a singer – but on her solos and blending with the others, Corey adds to the show’s powerhouse sound.

Costumed with great period detail by Ellis Tillman, the actors aren’t dead ringers for the stars they’re playing, but they sure sound like them. When Sevelovitz sings “Who Do You Love” and “See You Later Alligator,” when Seals tucks into “Folsom Prison Blues” and “I Walk the Line,” when Clendening croons “That’s All Right” and “Hound Dog,” when Scott tears into “Great Balls of Fire” and “Whole Lotta Shakin’ Going On,” the crowd goes wild.As it should.