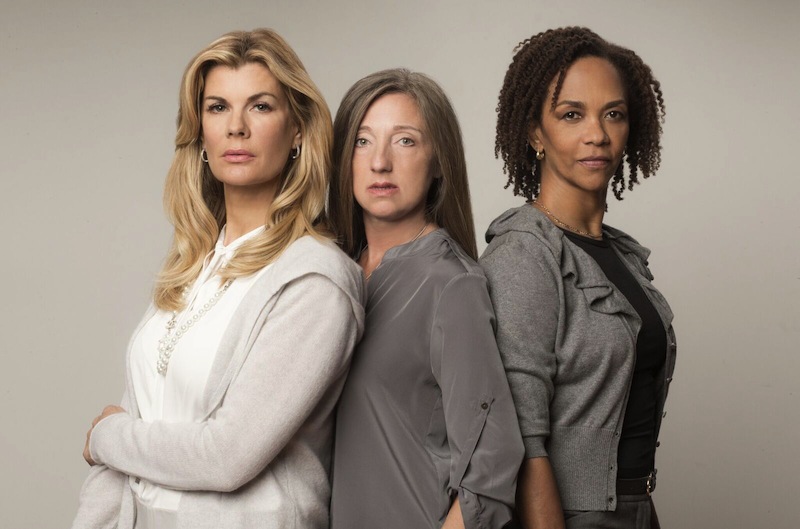 Michael McKeever began writing plays 20 years ago – “That Sound You Hear,” produced by New Theatre, was his first – and in the two decades since, he has easily become South Florida’s most prolific playwright.

His 24 full-length plays have been produced all over the world, and he has turned out an additional two dozen short plays. He has won seven Carbonell Awards, the region’s highest theater honor, for his plays (plus one more for his acting). In the spring, “Daniel’s Husband” will give him an Off-Broadway credit when Primary Stages’ production of his deeply moving play about marriage equality opens at the Cherry Lane Theatre.

On Friday, the world premiere of McKeever’s 25th full-length play, “After,” will launch Zoetic Stage’s sixth full season as part of the Arsht Center’s Theater Up Close series.

Superficially, “After” sounds a bit reminiscent of Yasmina Reza’s “God of Carnage,” the dark comedy in which two sets of parents tear into each other after one couple’s boy badly injures the other’s. But read McKeever’s script and you discover a play that’s far deeper, one more in the style and spirit of “Daniel’s Husband,” the playwright’s most accomplished drama to date.

“After” is arranged into three parts – director Stuart Meltzer calls them “movements,” as if they were music – titled “Before,” “During” and “After.”There are two warring couples, with Julia and Tate Campbell (Mia Matthews and Tom Wahl) trying to defuse the situation after their son Kyle is accused of threatening Matthew, a classmate who’s the son of their no-longer-close friends Connie and Alan Beckman (Jeni Hacker and McKeever). Julia’s good friend Val Wallace (Karen Stephens), a single mother of two accomplished sons, has reluctantly allowed herself to be dragged into the conflict as moral support for her friend, though events play out far differently than anyone expects.

Like “Daniel’s Husband,” “After” is at first infused with McKeever’s breezy humor, but it quickly upends expectations as it takes a darker turn. The plot is immensely topical, with surprising twists. There is a school shooting. There is a death. Bullying is put under the dramatic microscope, as are the results of different parenting styles.

“What started out as a play about the aftermath of a school shooting turned into an intimate look at two families,” McKeever says.“I wanted to get inside the women’s heads. Jeni told me I wrote the voices of the mothers correctly.”

McKeever and Meltzer, longtime partners who will wed next summer, don’t have children (unless you count their dog China). But McKeever, 54, is part of a large Irish-Italian family and has been close to his nephew and to his cousins’ kids. He thinks that has given him some insight into how people parent and what the results can be.

“I grew up in suburbia. I know what it’s like watching kids grow up, going through what they did as teenagers,” says the Davie-based playwright. “My stomach knots up. You look at the world around them since Columbine, and it’s a different world.”

Meltzer, who founded Zoetic along with McKeever, playwright-attorney Christopher Demos-Brown, attorney Stephanie Demos and former general manager Kerry Shiller, has directed a number of McKeever premieres in their 13 years together. The playwright smiles and says their professional collaborations work well in part because “he knows all my tricks.” But Meltzer, who didn’t stage “Daniel’s Husband,” sees the evolution of McKeever’s writing.

“He is showing more of a courageousness in storytelling, a deeper sense of curiosity about issues,” Meltzer says. “He also has a fire to communicate a point of view.”

Of the cast members, Wahl is the McKeever-experienced one – “After” is his fifth – while Stephens has worked in three plays, and Hacker and Matthews are making their McKeever debuts. He was still working on the script when each actor was cast, so some of the dialogue is tailored to their individual voices. And in fact, Wahl and Matthews were cast as the Campbells after both went to the McKeever-Meltzer engagement party, and they were asked to stand next to each other without being told why.

Hacker and Matthews each have two children, and both say that their characters’ mothering styles are somewhat similar to their own.

“I definitely feel an affinity for this character. I have a son the same age as the son in the show,” Hacker says. “I’m very similar to this mother, even though Michael doesn’t know me as a parent. He made her very combative and gave her a very dark sense of humor. She’s very fiery and spunky and will not be told how to act.”

She also believes McKeever has found great insight into the disintegration of parental friendships as children grow up and into the very art of parenting.

Of the latter, Hacker observes, “We’re always questioning ourselves as parents. We’re forced to make decisions and choices, and we look back and wish we’d chosen differently … You’re terrified as you hand them off to the world, but you have to do those things if you want to raise a person. From the moment they’re born, they’re on their way out.”

Matthews finds a similarity in Julia’s looser parenting style and her own.

“I pay attention, but there’s no helicoptering involved. I have teenagers, and they’re basically good people,” she says.

In researching the issues in the play, Matthews read books by parents whose children murdered others. She found their accounts chilling but illuminating.

“Everyone suffers, across the board. Most of them left town or changed their names. Some became mental health advocates,” she says. “But mostly, there’s no empathy for them, no compassion, no support.”

Wahl has a particularly tough moment in the play when Tate silently reads a letter from his son, then begins to weep. McKeever deliberately didn’t write the contents of that letter – he wants the audience and actors to imagine what’s in it – so Wahl has filled in the blanks for himself, and the tears do come.

“You wonder how the parents have gotten to this point, especially with their son behaving this way, but they had no clue,” he says. “They’re in complete denial.”

Stephens, whose Val keeps getting drawn into a situation that turns tragic, says, “I don’t know if there’s any parent who would admit they aren’t a good parent. But having a child doesn’t make you a good parent.”

Bullying, one of the key issues in “After,” is something several artists involved in the premiere experienced firsthand. Meltzer, who shared his story in detail with the cast, says that he was bullied “nearly every day from fourth grade on.” Wahl and Stephens were also the targets of bullies.

But bullying today, Stephens says, is different. “I grew up in a time when it was commonplace. People called me names and made fun of me. I was meek and slight in size. It hurt my feelings and made me afraid to go to school, but you just dealt with it,” she says.

“Now, kids commit suicide because they’re bullied.Now, there’s so much more bullying. Maybe it’s a reflection of who we are that it’s happening so much. And maybe we’re raising really fragile children in a hostile environment.”