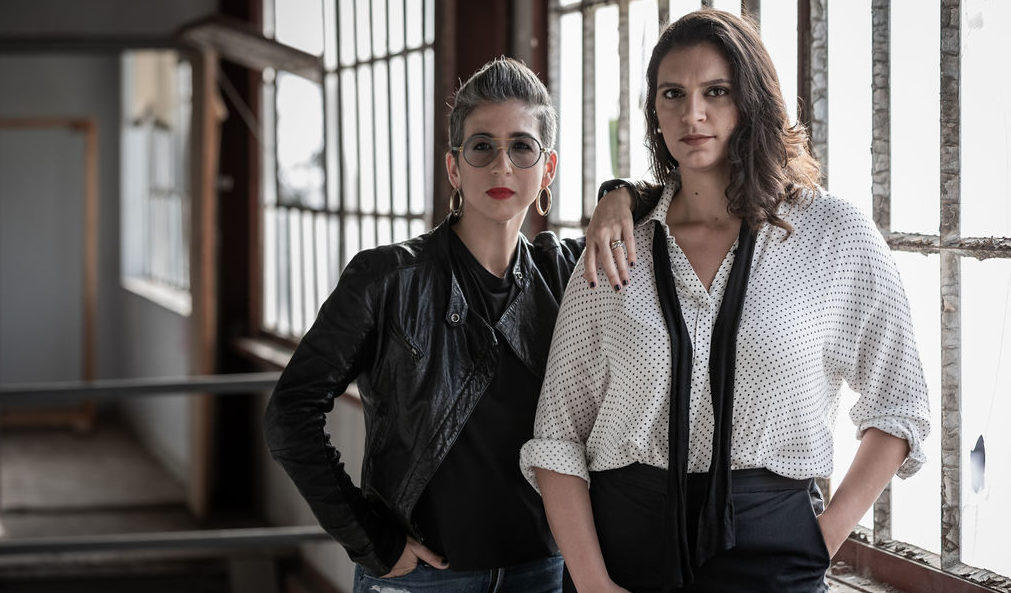 Immersive theater is having a moment in Miami.

In a repurposed home at 221 NE 17th St., Vanessa Garcia’s “The Amparo Experience” is taking audiences on a journey through the lives of the Arechabalas, the family that created Havana Club rum in 1934. After Fidel Castro’s government nationalized the business in 1960, much of the family fled to the United States and Spain, where the war over the much-loved brand continued. “Amparo” is the story of a family’s loss and triumph, one echoed in the experiences of countless Cubans who left their homeland to forge new lives in places like Miami.

After “Amparo” has its official opening April 11, Juggerknot Theatre Company will launch its latest look at a place, its people and its history when “Wynwood Stories” opens April 16. Following its successes with “Miami Motel Stories: Little Havana” in 2017 and “Miami Motel Stories: MiMo” in 2018, Juggerknot and resident playwright Juan C. Sanchez are turning their gaze on Miami’s popular Wynwood neighborhood. This time, the production takes place at the Wynwood Yard, Della Heiman’s bar-food-music space at 56 NW 29th St. Heiman’s concept will head out to Doral after May 5, making room for more Wynwood development.

Immersive theater is, of course, nothing new. “Tamara,” a site-specific piece about artist Tamara de Lempicka, opened in Los Angeles in 1984 and ran for nine years. “Sleep No More,” an immersive reworking of “Macbeth,” has been running at Manhattan’s McKittrick Hotel since 2011.

Miami entered the immersive-theater arena in a high-profile way when Juggerknot produced “Miami Motel Stories: Little Havana” and “Miami Motel Stories: MiMo,” and the company also produced the hour-long pilot versions of what is now the 90-minute “Amparo” at Little Havana’s Ball & Chain in 2017 and Bill’s Townhouse in Manhattan in 2018. With financial backing from Bacardi, which has been making Havana Club Rum using the original Arechabala family recipe since 1995 in Puerto Rico, the two-month run of “Amparo” is now being produced by the Broadway Factor (Jim Kierstead, William Fernandez, George Cabrera and Deborah Ramirez).

Even more immersive theater is on its way: Juggerknot plans future productions of “Miami Motel Stories” in North Miami and Overtown, and Miami playwright William Hector has been awarded a $75,000 Knight New Work grant from the Knight Foundation to create “G7: 2070: An Immersive Theatrical Summit,” in which the actors and audience meet in a flooded future Miami to determine the fate of the world.

“Amparo,” which has been in previews since April 4, is the work of the Miami-based playwright, novelist and journalist Garcia and director Victoria Collado, who splits her time between New York and Miami. Working together as the Abre Camino Collective, they have created a complex work as their first major project: “Amparo” features five tracks, 23 characters, four musicians and two dancers. At the suggestion of Paul Ramirez of Team Enterprises, which markets Havana Club Rum, Garcia began researching the history of the Arechabala family. Soon, she and Collado were deeply into a piece that resonated powerfully with the two Cuban-American artists.

“I got completely obsessed with a story that I felt I’d been preparing my whole life to tell,” Garcia says. “Vicky and I have learned how to work in conversation and total collaboration with each other. … I feel this is the most important thing I’ve done. I feel it’s coming from somewhere bigger than me.”

Collado clicked with Garcia right away, feeling the similarity in their own family stories. “Our stories mimic each other, and Vanessa is a creative partner I felt impassioned about working with,” the director says. “I’ve always wanted to talk about Cuba.”

Garcia has written each iteration of “Amparo” to reflect the space in which the drama takes place. At Ball & Chain, the play occupied a circular space. In New York, the three-story building “helped us go deeper,” Garcia says. 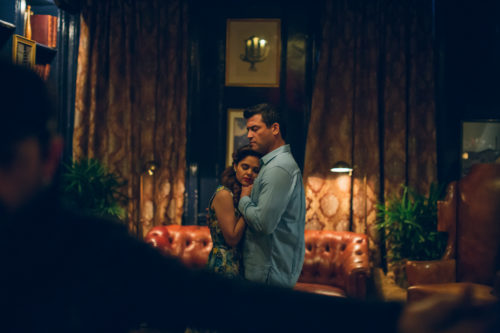 Now, in the Miami villa space, audiences are transported to Cuba circa 1957, watching as the young Amparo (Bertha Leal) falls for and marries handsome Ramon Arechabala (René Granado). Soon enough, the revolution occurs, the family’s business is confiscated, and some time after the Arechabalas go into exile, the state-run Corporación Cuba Ron partners with Pernod Ricard to sell a rum labeled Havana Club internationally, with a legal battle over that product and the Bacardi-made Havana Club dragging on for decades.

The large cast includes a number of Cuban and Cuban-American actors, including Susana Perez as the older Amparo, Roberto Escobar as the older Ramon, Héctor Medina (best known for his starring performance in the movie “Viva”) as the revolutionary Evaristo and Francisco Gattorno as the older Miguel. Cuban singer Roberto Torres performs his hit “Caballo Viejo,” and musical direction is by Jose Elias of Miami’s Spam Allstars.

Two of the five tracks in “Amparo” are bilingual, the others largely in English, though Garcia has mixed some Spanish into those, as well. The 75 theatergoers who attend each performance sometimes scatter to follow their guide, then come back together as a group for certain scenes. And there are rum-based cocktails as part of the evening — hence the ban on theatergoers younger than 21.

At a promotional event for the play, some of the actors spoke of how deeply Cuba resonates in their lives. “I left Cuba when I was 3,” Escobar said. “But I live and breathe Cuba every day.”

Garcia, who earned her doctoral degree in creative nonfiction with a focus on Cuba, observes that the play “comes from a person who told me her story. There are embellishments on some of the other characters to get a sense of the era, but it’s based on research and facts.”

Collado prefers to call what she and her collaborators are creating “experiential theater.”

“We play a lot with sound, vision, things you can’t see … We’re trying to mess with your senses,” she says.

As much as “Amparo” tells the specific story of a well-known Cuban family, Garcia and Collado believe that universality lies within it.

“There really is a refugee crisis around the world. It’s not just an immigrant story but a story of exile,” Garcia says. The hope for “Amparo,” she adds, is that it “will go to as many places as possible and that as many people see it as possible. In New York and beyond.” 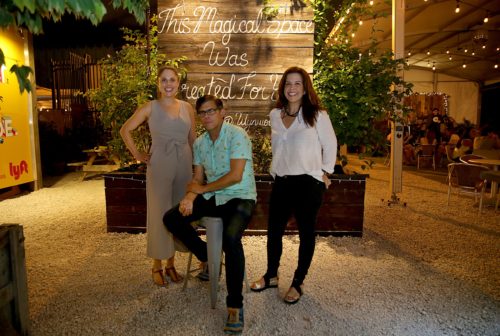 Juggerknot’s “Wynwood Stories,” on the other hand, is part of the company’s larger effort to bring Miami’s history to life, one neighborhood at a time. When Heiman announced she would be shutting down the Wynwood Yard in early May, Wynwood moved to the forefront of Juggerknot’s projects in an accelerated process.

“This is an interesting transitional point for Wynwood,” founder and executive artistic director Tanya Bravo says. “Each character represents a community at a certain time. The change is so quick here.”

“Wynwood Stories” features 10 characters you might have encountered in the neighborhood from the 1920s to the present. Joseph Chaille (Stephen Kaiser), founder of what was initially called Wyndwood Park, complains that he hasn’t had the recognition given other Miami pioneers. Chris Krider plays a baker who worked at the American Bakeries Company, Angelina Lopez Catledge a Cuban seamstress, Rayner G. Garranchan a street artist/graffiti writer, and Madelin Marchant a Puerto Rican resident when the neighborhood was called Little San Juan. Susie K. Taylor plays one of Wynwood’s emblematic gallery owners, Gregg Weiner a developer, A.J. Ruiz a muralist, Chat Atkins a handyman at the bakery-turned-art space known as the Bakehouse, and Sandi Stock portrays Wynwood Yard founder Heiman.

Playwright Sanchez has written numerous short plays for the two editions of “Miami Motel Stories,” but for “Wynwood Stories,” his research, interviews and writing had to happen fast. His experience served him well.

“I have a sense of what immersive theater is, how it moves. I know the steps,” he says. “Here, there’s a turf war over who owns Wynwood, who represents it, who started it. … You see people and eras colliding.”

For “Wynwood Stories,” there are two tracks, with 20 people at a time following each one. Miami-raised, New York-based director Tai Thompson, who served as assistant director on the earlier “Miami Motel Stories” productions, has different challenges this time around.

“This production is still guided, but there’s more engagement, more traveling. You become more a part of the world versus a fly on the wall,” she says.

Of Sanchez, she says, “Juan is really great at writing real people with an almost cinematic style of writing. There’s so much forward momentum to his words. He forces you to engage.”

Bravo, who believes that there are “a lot of eyeballs” fixed on the work being created in Miami’s growing theater community, believes that pieces like “Wynwood Stories” and “Amparo” attract younger audiences because of a thirst for connection.

“With immersive theater, everything is integrated in an organic way,” Bravo says. “We live in a world that’s technology-driven. We don’t connect the same way we used to. We want everything to be immediate. … In immersive theater, people are present, feeling something, standing in someone else’s shoes.”

“Wynwood Stories” is a Juggerknot Theatre Company production running April 16-May 4 at the Wynwood Yard, 56 NW 29th St., in Miami,. Performances are 6:30 and 8:15 p.m. Tuesday-Wednesday (plus additional performances April 28) and 7, 8:30 and 9:45 p.m. Thursday-Saturday. Tickets cost $75 per track, with two tracks running simultaneously (students pay $25 if tickets remain before a performance). Call 877-504-8499 or go to TheWynwoodStories.com.

Top photo: Playwright Vanessa Garcia (left) wrote “The Amparo Experience,” which is being directed by Victoria Collado. running through May 31 in Miami. Photo courtesy Jody McClean.