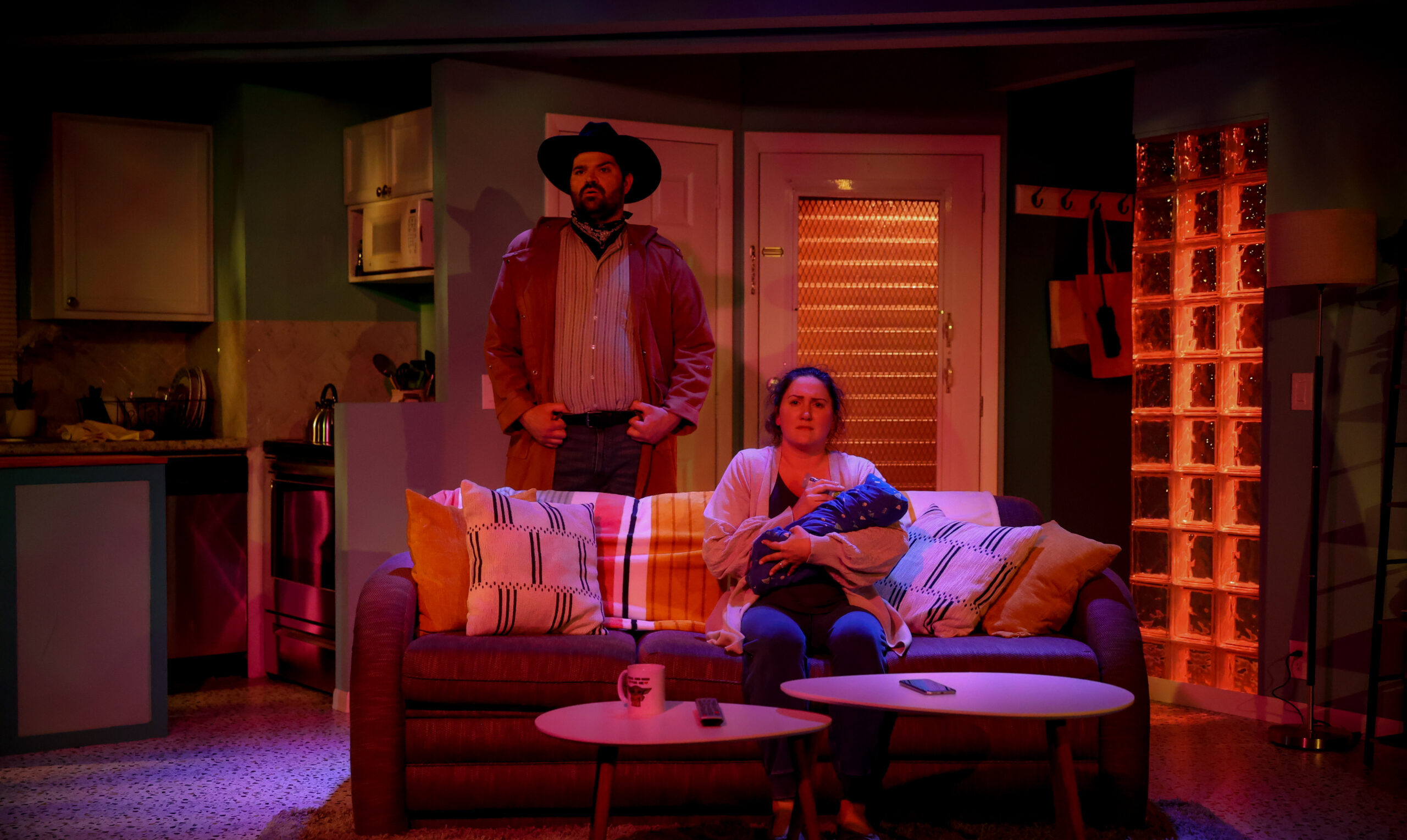 From extensive research and personal experience, Miami playwright Gina Montét knows that pregnancy, childbirth and new motherhood are anything but simple.

Baby showers and gender reveal parties, natural childbirth options, the adventures of nursing or of getting the baby on a strict schedule — these are all “normal” parts of the journey, if we’re to believe the detailed information in that pregnancy bible, “What To Expect When You’re Expecting,” or on websites like TheBump.com. But don’t believe everything you read.

Montét, whose play “Overactive Letdown” is getting a world premiere production at Boca Raton’s Theatre Lab, has caught one of a playwright’s brass rings just now.

Written in 2018-19 when Montét was part of the Playwright Development Program run by Miami-Dade County’s Department of Cultural Affairs, the script continued to evolve through various avenues: at the Playwrights’ Center and the Center for the Performing Arts in Minneapolis; with Florida International University’s The Greenhouse play development program; and as part of Theatre Lab’s 2020 New Play Festival. But Montét and any other playwright would tell you that a full production is the real beginning of a play’s potential ongoing life.

Montét’s aim in “Overactive Letdown” is to explore how societal and personal expectations, isolation, hormonal changes and severe sleep deprivation contribute to postpartum depression — or, in extreme cases, postpartum psychosis.

Initially, “Overactive Letdown” seems to be a playful exploration of expectations vs. reality, with some naivete thrown in for good measure. In the dark, before the stage lights come up, we hear the voices of Christine (Lindsey Corey) and Mark (Timothy Mark Davis). Are they having sex? Sure sounds like it.

Wrong. Hubby is actually making a plaster cast of his pregnant wife’s belly and breasts so that once the baby arrives — soon, really soon — it can be decorated and then adorn a wall in the nursery. 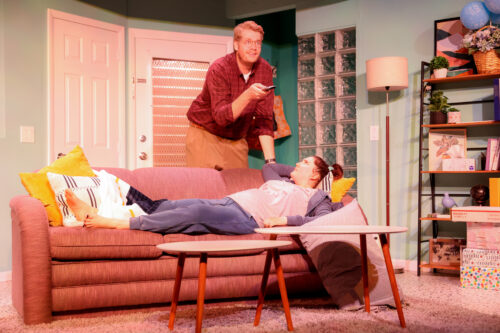 The new parents (played by Timothy Mark Davis and Lindsey Corey) cope with the stresses of life with a newborn baby. (Photo courtesy of Morgan Sophia Photography)

In that getting-to-know-them first scene, we learn that Christine and Mark are excited, funny and focused on their life-changing transition into parenthood. She’s hyper-organized, with baby minutiae arranged in color-coded binders. He’s game but doesn’t always listen. He’s also ready to take on extra work so she can be an at-home mom.

Baby Jack arrived by C-section, which has left Christine with guilt and pain. Nursing soon becomes a nightmare of excruciatingly sore breasts and a problematic overactive letdown reflex: The mother’s milk comes out so fast and at such a volume that the baby can choke or stop feeding.

Not wanting to see her controlling mother or anyone else, Christine burrows into new-baby isolation, sinking into loneliness, worry and feelings of inadequacy, the latter heightened by a judgmental lactation consultant and a breezily oblivious friend (both played by Maha McCain).

Sometimes, she finds escape and respite in Netflix movies. Montét serves up a series of male cinematic archetypes played by Alex Alvarez: a wealthy Regency-era landowner; a lover on a doomed ship; a man-of-few-words cowpoke; a seemingly friendly cop who deepens Christine’s fears; a final ominous presence. As the 90-minute play goes on, she spirals into the darkest place imaginable.

Theatre Lab’s premiere production is in the infinitely capable hands of director Margaret M. Ledford, an artist who has been attached to the play for some time, as have Corey and Alvarez. With grace and precision, she helps guide the characters and the audience on the play’s journey from joy-filled hope to the depths of despair.

Corey gives a richly complex performance as a young woman who innocently imagines she’ll be able to catch up on her reading and TV watching whenever her baby is napping. Instead, increasingly frantic and detached from reality, Corey’s Christine does her best to conceal how  mental illness is infiltrating her every thought. It’s a powerful, difficult role, and Corey meets its shifting challenges. 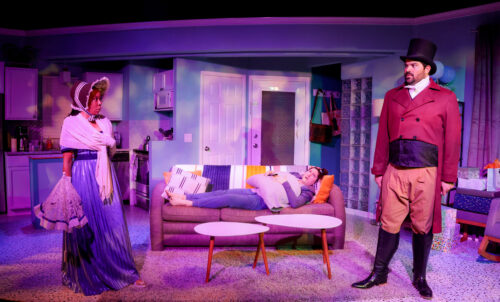 As her husband, Davis is engaging and amusing, then increasingly disturbed and put off by his wife’s behavior. Because Mark is meant to be off working a lot — thus underscoring Christine’s isolation and making time for her movie-fueled fantasies — Davis has only a moderate amount of stage time, which is too bad, because his interactions with Corey’s Christine are illuminating.

McCain and Alvarez both have the pleasurable challenge of playing multiple  characters.

McCain is first seen as a belle who doesn’t want to marry Alvarez’s Regency landowner (think “Bridgerton”), then as the lactation consultant whose baby-centric words make Christine utterly miserable, then as a supermom friend whose mastery of all baby-related things sends Christine spiraling further.

The handsome Alvarez, who shifts accents as he breathes life into those cinematic archetypes, becomes increasingly dangerous to Christine. Conjured from her imagination, embodying her worst fears made real, Alvarez becomes a striking, magnetic, ominous force.

Theatre Lab’s scenic designer Michael McClain has given Christine and Mark a living space that looks like a neat, if older, Miami apartment, one with a jalousie front door that becomes the portal to Christine’s fears. Lighting designer Eric Nelson and sound designer Matt Corey summon the characters’ fantasy worlds, the last one a nightmare straight out of a horror movie. Costume designer Dawn C. Shamburger underscores Christine’s changing physical state and psychological deterioration.

Often, a first production of any play can underscore what works, what doesn’t, what could make the script stronger.

Theatre Lab’s intimate stage makes the movie sequences more challenging to pull off, physical proximity blurring the line between fantasy and reality. The play has been described as a “dark thriller,” but though it is ultimately dark, the “thriller” part doesn’t quite fit. Tonally, its shift from happy anticipation to stark tragedy is ultimately jolting.

Montét, mother to three boys, notes in the play’s program that she experienced some postpartum depression, had a C-section and, while home with her third son, binge-watched movies — all experiential threads woven into the script. But in creating Christine and writing “Overactive Letdown,” she wanted to craft a play about “the agonizing shame and secrecy that can accompany mental illness.”

New motherhood can be joyous and exhausting, fulfilling and exasperating, often on the same day. Or in the same hour. But for some unlucky women, the darkness consumes the light. In “Overactive Letdown,” Montét gives them voice.