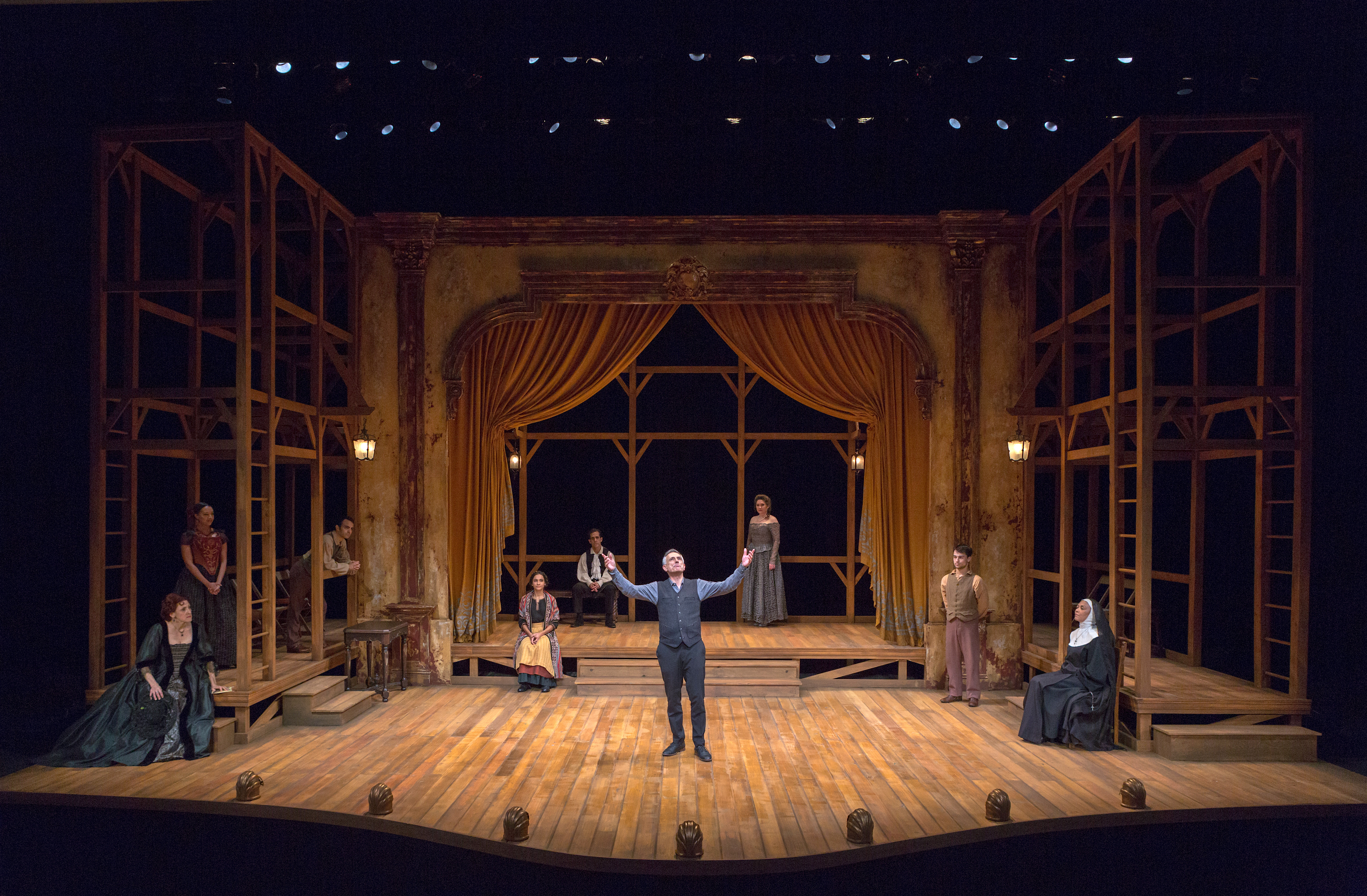 How does the bedrock need for love shape our lives? Does God determine how and when we will die? Is that passage from life a matter of fate? Or does a deadly disaster come down to being in the wrong place at the wrong time?

Written and staged by Greenspan, who also portrays the manipulative Uncle Pio and serves as the 75-minute play’s propulsive narrator, “The Bridge of San Luis Rey” has just opened Miami New Drama’s 2019-2020 season at the Colony Theatre on Miami Beach.

Greenspan’s omniscient narrator is a nod to the Stage Manager in Wilder’s “Our Town.” And from the moment he strides onto Antje Ellermann’s striking period theater set – with its clamshell footlights and with Yuki Nakase Link’s warm lighting suggesting a memory play – he explains what we will and won’t see, invites the audience’s collaborative imagination, and becomes a briskly engaging storyteller.

That story, Greenspan editing and interpreting Wilder, explores the lives of five people who die in a bridge collapse in Peru. On July 20, 1714, precisely at noon as the travelers are crossing an Incan rope bridge over a gorge lying between Cusco and Lima, the bridge snaps, plunging the five souls to their deaths.

The narrator doesn’t initially reveal the names of the victims; instead, he tells their stories, so that by the time each one dies, the audience can more deeply connect to the loss. 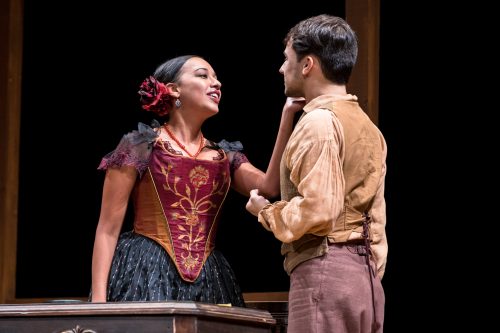 Characters move onto the playing area, then retreat but remain visible in the shadows of the wooden structures on either side of what looks like a vintage 18th century stage. Greenspan serves as the engine driving the shift from scene to scene, at one point quipping, “There’s such a lot to do in interlocking stories.” The narration and dialogue contain graceful end-of-line rhymes and internal ones, infusing the play with a kind of poetry handled so well by the actors that it doesn’t call attention to itself.

Greenspan first introduces the women, then brings on the men. Doña María (Mary Lou Rosato), the Marquesa de Montemayor, is a lonely older woman who works hard via carefully crafted letters to maintain a tenuous connection to Doña Clara (Lindsey Corey), the daughter who has married and moved to Spain to put an ocean between herself and her needy mother.

Doña María’s companion and servant, an orphaned girl named Pepita (Marcela Jabes), misses the loving guidance of Madre María (Karen Stephens), whose idea in placing Pepita with Doña María is that the wealthy woman may help the orphanage grow.

Camila Perichole (Jeanette Dilone), the most celebrated actress of her day, has a complicated relationship with Uncle Pio, chafing at her Pygmalion yet deeply needing his approval. Beautiful but illiterate, she enlists the services of a scribe named Manuel (Kevin Veloz), dictating letters to her two lovers, a famous matador and the older aristocrat Don Andrés (Carlos Orizondo). Manuel instantly becomes besotted with her, driving a wedge between him and his twin brother, Esteban (Austin Reed Alleman).

Though “The Bridge of San Luis Rey” is steeped in tragedy, as we know from the outset, Greenspan has been careful to infuse his script and production with deftly placed moments of humor. Orizondo plays both Don Andrés and the seafaring Capt. Alvarado, as well as Doña Clara’s husband, Don Vicente, and two other characters. When Andrés and Alvarado have a “conversation,” Orizondo pulls off the feat by pulling off the aristocrat’s wig and putting on the captain’s hat. Two performances in particular are such compelling illustrations of the actor’s art that they justify seeing “The Bridge of San Luis Rey” merely to experience them. 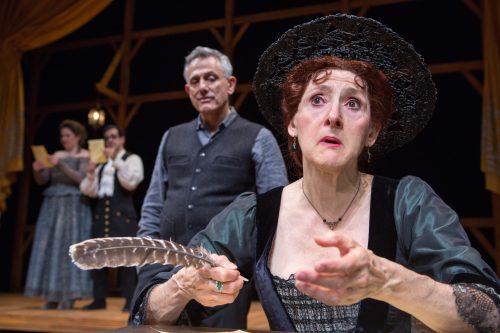 The Obie Award-winning Greenspan is here a dynamic, stylized artist who is fascinating to watch, even in moments of stillness. The Miami-raised, Juilliard-trained Rosato – whose long career has included Broadway, Off-Broadway, major regional theater, seven seasons as a founding member of The Acting Company, film and television – is simply brilliant as the agitated, pitiable Doña María. Costume designer Elizabeth Hope Clancy helps make Rosato look like a figure straight out of a Goya painting.

Dilone is also visually striking, from the fabric flowers adorning her hair to the tips of her red-stockinged toes. Yet because of the way Greenspan has written Camila and directed Dilone, she’s not convincing as a famous artist. Her speaking voice is that of a contemporary young woman, and she lacks the flamboyance of a figure who routinely drives men mad. Dilone is better, however, once Camila embraces a life away from the stage, a life marked by several kinds of loss followed by a sense of purpose.

Each of the other actors has compelling moments, though Greenspan’s storytelling as the playwright is sometimes more efficient than moving or inspired. Miami New Drama’s production is just the second time the play has been produced, and though it is drawn from Wilder’s beloved novel, it may continue evolving as a standalone work of theatrical art.

What: “The Bridge of San Luis Rey” by David Greenspan, adapted from Thornton Wilder’s novel