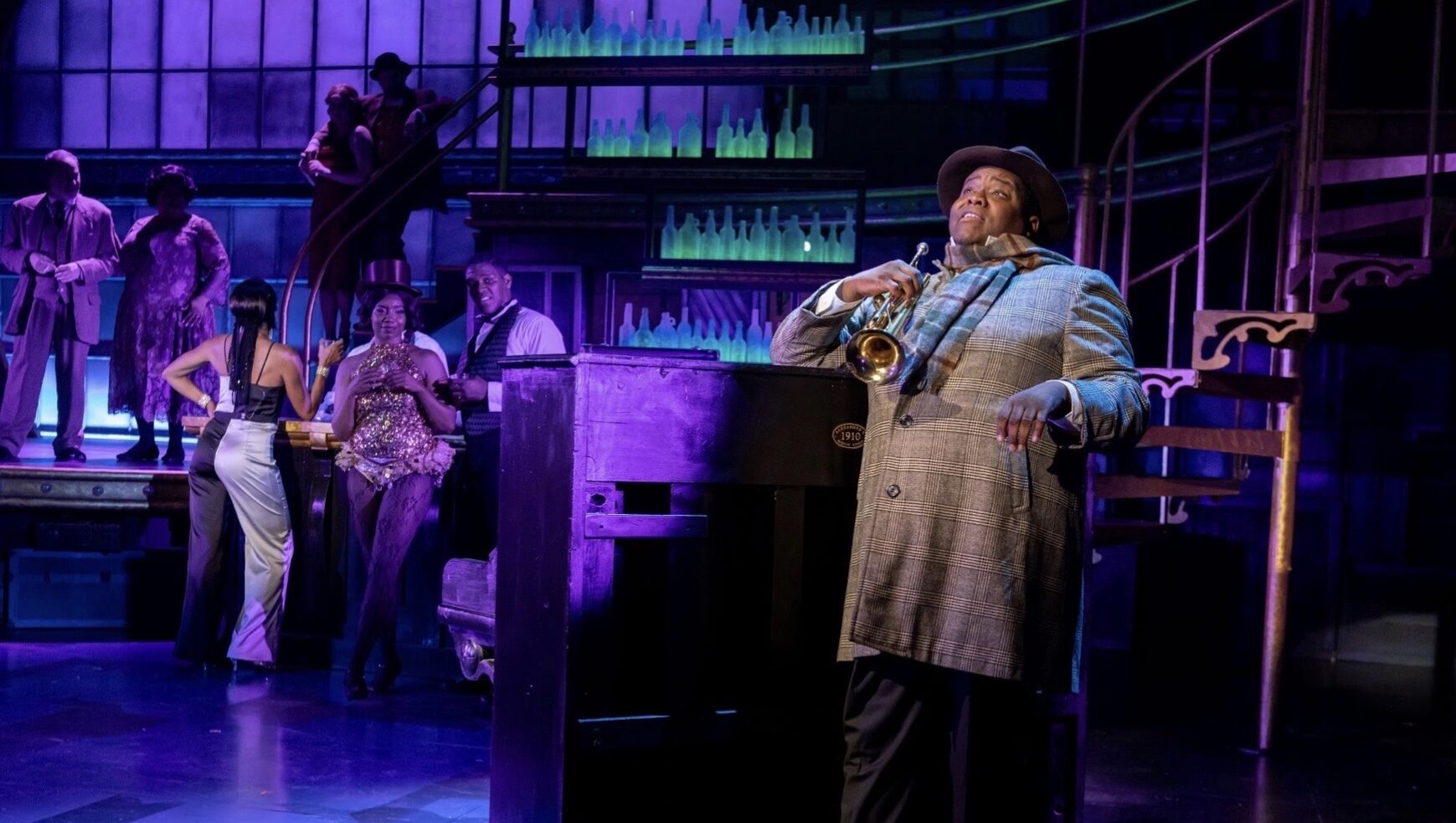 In March 2020, on a Friday the 13th, Miami New Drama’s world premiere musical, “A Wonderful World,” had a final preview performance. The glitzy gala opening of the $1.5 million show about jazz great Louis Armstrong was set for the following night.

This time, the show did not go on.

The COVID-19 pandemic put so much of life on hold, world premieres included. But now, after almost two years of down time and a fresh week of previews at Miami Beach’s Colony Theatre, “A Wonderful World” is set to open at last, on Saturday, Dec. 11, 2021.

With a book by former Miamian Aurin Squire, and more than three dozen songs orchestrated by Annastasia Victory and Michael O. Mitchell, the musical follows the innovative and hugely influential Armstrong from his boyhood in New Orleans to his 1971 death in New York City at age 69.

Squire, a writer-producer on the CBS television series “The Good Fight” and “Evil,” tells Armstrong’s story in chapters, each from the perspective of one of his four wives: Daisy Parker, a volatile New Orleans prostitute; Lil Hardin Armstrong, a Chicago pianist who helped polish his image; Hollywood-glamorous Alpha Smith, the only wife who left him; and former Cotton Club singer Lucille Wilson, whose home with him in Queens is now the Louis Armstrong House Museum, a National Historic Landmark.

Of the man himself, Squire says, “He led a quintessential American life. He was the best at balancing the white audiences who paid his bills but not losing his credibility among Black audiences … His almost 70 years as a jazz musician was like 140 years for a normal person.”

Adam Koch’s set for “A Wonderful World” has been sitting on the Colony Theatre’s stage for the past 21 months, awaiting the return of the artists who would bring Armstrong’s world to life. But aspects of the production, its resonance and the artists themselves have changed during the long pandemic pause. 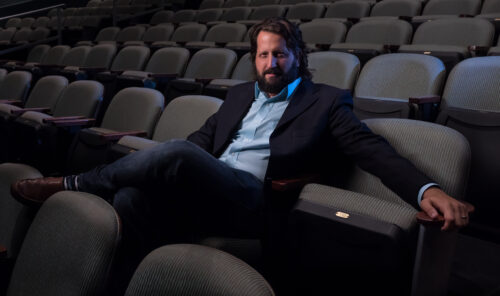 “Aurin packed a knife into Louis Armstrong’s trumpet case. This is a very politically and socially astute play about America,” says Michel Hausmann, cofounder and artistic director of Miami New Drama. “This is the right play for the world as it begins again. But certain things should not be seasonal. Confronting the oppression of non-whites, especially Black people, is urgent.”

About half of the original “Wonderful World” cast was unable to return to the show due to other commitments.

“Some things allow you to be nimble, but a musical isn’t one of them. We had to coordinate the schedules of at least 50 people,” Hausmann says. “We also decided to push the show closer to the end of the year, because we thought the fall would be an experimental period with people going out again. I’m glad we waited.”

Juson Williams, who appeared with his JW’s Inspirational Singers on “America’s Got Talent” in June, is still starring as Armstrong, the jazz genius and gravel-voiced singer whose engaging public persona made him an international star with crossover appeal. Miami jazz singer Nicole Henry is back as Alpha Smith, and Homestead-born Darlene Hope is again playing Lucille Wilson. New to principal roles are Christina Sajous as Daisy Parker and Allison Semmes as Lil Hardin.

“When I came back, I started to give him more grace,” Williams says, of the Armstrong role. “Those types of people have been hurt. He hurt people and didn’t realize it. Finding that was healing.

“I’m bringing a new level into the show, from not being in theater for two years. I believe that.” 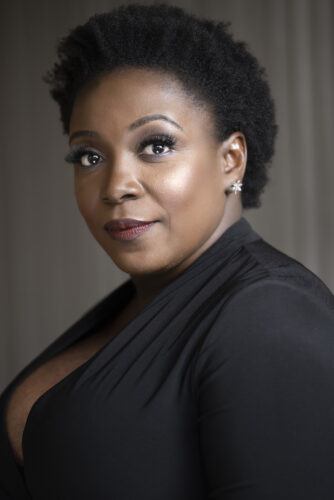 Darlene Hope, a Homestead native, is back in the role of Lucille Wilson, fourth wife of Louis Armstrong. (Photo courtesy of Michael Cairns)

Hope, grateful to be back, has also undergone a shift in perspective.

“Some of the tactics I was using before feel stale now. You have to find fresh reasons for what you do, have to listen more deeply. Acting is being. Acting is living,” she says. “Coming out of the pandemic, where we’ve all lived 1,000 lifetimes in a year and a half, you have more to draw from than before … I feel more connected to Lucille. She’s not a monument; she’s a human being.”

Henry — whose eclectic newest CD, “Time to Love Again” — was recorded during the pandemic, kept her music career going while doing periodic artistic check-ins with her “Wonderful World” role. 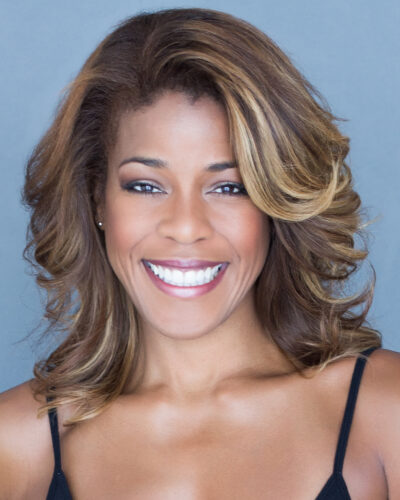 “Character development can be endless. I tried to visit Alpha every now and then,” she says.  “Being a vocalist is such singular work. It’s wonderful to be back here, to be part of a unit. Everybody is so joyous. We feel even more connected.”

Asked about Sajous and Semmes, the two new “wives” in the show, Squire calls their contributions “remarkable” while appreciating the work of their predecessors.

“They give their roles a completely different tone, [refreshing] some of the thoughts I had.  They bring all these colors to the roles. It’s like comparing Picasso to Matisse,” he says.

Sajous, who has been in five Broadway shows, was drawn to “A Wonderful World” and the character of Daisy Parker — about whom little is known — because of Squire’s script.

“The story feels very linear, especially for musical theater. I’m impressed with how Aurin uses time – he injects a lot of story into small scenes,” she says. “It feels so full of life. The pacing is amazing.  This is something I had to do … Working from the inside out, I had to figure out how to integrate a woman I don’t know, other women and myself to bring her to life in a relatable way.”

Semmes, a singer-actor who performed in two Broadway shows and toured as Diana Ross in “Motown the Musical,” says “A Wonderful World” made her rethink her pre-pandemic decision to walk away from musical theater.

“This story feels so familiar, and it’s like all the stars have aligned … The writing got me … it’s yummy. I connected with Lil Hardin. I’m from Chicago and a family of jazz musicians. My grandmother knew or interviewed Lil,” Semmes says.

(Video courtesy of Florida International University’s Inspicio Arts e-magazine. Actor Darlene Hope answers the question: “Do you think that most Millennials will know who Louis Armstrong was?” Find more video interviews with Hope by clicking here and more videos with the cast by clicking here.)

Hausmann thought the original “Wonderful World” cast was “outstanding,” but he sees the value in coming back to the show with new artists in the mix.

“The new cast allows us to revisit the play in a completely new light,” he says. “It’s been a blessing to have some cast members discovering the play for the first time, and the creative team has also been looking at the show with fresh eyes … Hopefully, this will become a part of the American theater canon.”

“A Wonderful World” began as an idea dreamed up by the show’s Tony Award-nominated British director Renshaw and writer Andrew Delaplaine, whose sister Renee and brother-in-law Thomas E. Rodgers Jr. are major investors and retain the commercial rights to future productions of the musical. Hausmann introduced Renshaw and Squire, who hit it off creatively and made a show.

Renshaw, who lives in Miami Beach near the Colony, has directed a “King and I” revival and “Taboo” on Broadway. He says he was in denial at first when “A Wonderful World” closed abruptly, but that Hausmann “kept the faith and promised me it would reopen.”

The director has found he’s enjoying the work more as he blends the performances of original and new cast members. Given the lessons of the pandemic, the Black Lives Matter protests, and the push for greater equity, diversity and inclusion in theater, Renshaw thinks the musical “feels more relevant, more important. I have the privilege of directing a family of Black artists in a special piece that can help with the healing the world still needs. Even in the first number [the title song], the lyrics have a resonance as a vision for a better world.”

While keeping up with his demanding TV writing career, Squire spent time during the pandemic tightening the script: “We changed some music, tones, transitions.” 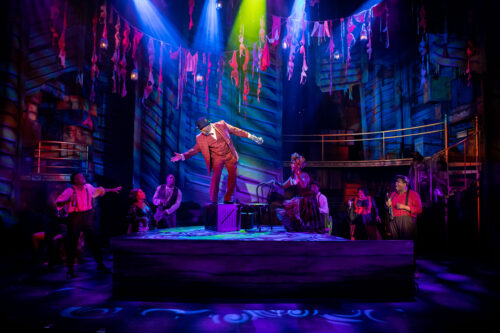 Squire hopes that “A Wonderful World” will endure and have a life, whether in London, New York City or elsewhere, but his current goal is to “have a great production fully realized here,” so that in the future the typical route of musicals coming from Broadway to Miami can sometimes be reversed.

The set was already built, but labor, personnel, a large cast and seasonal housing in Miami Beach before, during and after Art Basel will make “A Wonderful World” the most expensive production in the company’s season of four world premieres, according to Miami New Drama managing director Nicholas Richberg.

“It wouldn’t have been possible to produce something on this scale without Tom Rodgers,” he says.

“He came up with the angle of telling his life story through the eyes of Louis’ four wives. The biography just follows him around,” Rodgers says. “Most people will recognize every song in the show. I hope we can take it another step farther. I think [the creative team] has bigger visions this time around … It’s a very worthwhile story about music history and jazz history.”

WHAT: Miami New Drama production of “A Wonderful World,” by Aurin Squire

To read the original March 2020 preview for “A Wonderful World,” click here.