Eli Timoner was known to Miamians for his no-frills airline Air Florida, which he founded in 1972. It was an intra-state carrier that offered low rates and began a Miami-to-London route that beat out the big-name airlines when it charged as little as $175 for a transatlantic trip.

Documentary filmmaker and Ransom Everglades graduate Andrea Doane “Ondi” Timoner, the middle child of three, was daddy’s girl, right up until the very end. She didn’t set out to document the last days of her father’s life in what’s become her latest film “Last Flight Home.” But the labor of love and what was meant to be a private memorial video for the family turned into a full-length feature documentary. “It just poured out of me,” Ondi, 49, says. 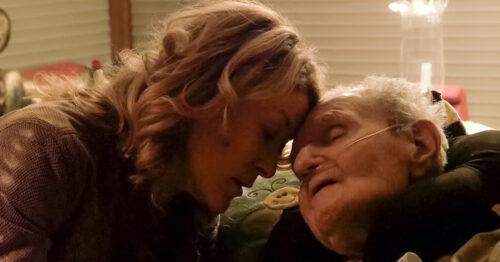 Ondi Timoner and her 92-year-old father, Eli, during his final days in a scene from the documentary “Last Flight Home.” (MTV Documentary Films)

“Last Flight Home” has played the big festival circuits, which included a premiere at Sundance, and was an official selection at Telluride and London. Now in release through MTV Documentary Films, “Last Flight Home” comes “home to Miami” opening Friday at Coral Gables Art Cinema.

It was in January of 2021 after her father was hospitalized because of breathing problems that he had made his wishes known. He had a series of health issues since a stroke in 1982 paralyzed and blinded him on his left side. On that day in January, he told his family, “I am going to take my life on the 3rd of March. I don’t want to fight anymore. I want peace.”

In the film, we see Ondi’s sister, Rachel, a rabbi, asking her father “Are you definitely, definitely sure you are ready to go?” 92-year-year-old Eli, totally of sound mind, responds: “I am ready to go to the next adventure.”

His dying wish was put into motion through the California End of Life Option Act and Ondi captures those 15 days leading up to March 3, 2021, where she filmed in her parents’ Pasadena bungalow (they had moved in 2005 from Miami to California to be closer to their children and grandchildren). At this point, Eli is in a hospital bed in the middle of the living room.

California is one of ten U.S. states and the District of Columbia where medical aid in dying is authorized and legally allowed. 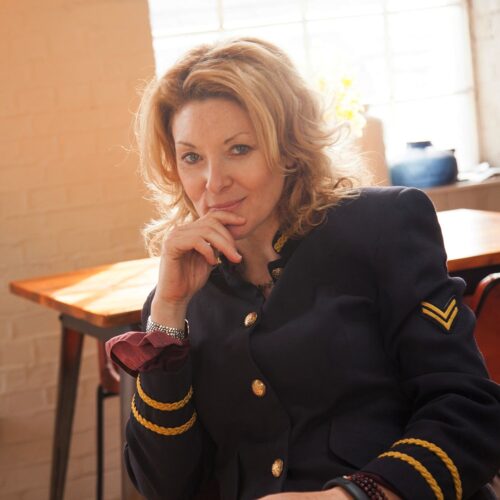 Ondi Timoner grew up in Miami, went to Yale University and became a filmmaker. Her latest documentary chronicles his father’s wish to end his own life. (Photo courtesy of MTV Documentary Films)

“My real motivation and urge to film Dad’s final days was not to forget him. I thought it would be something that I could give to my family that we would have forever,” she says. She kept a camera behind a closed door so as to be unobtrusive as people would come to say their final goodbyes to Eli. At other times, cameras were present. She says the family was used to Ondi’s filmmaking with cameras around all the time.

Since she wasn’t filming with a public documentary in mind, she unflinchingly shows so many personal moments including the exact process, the delivery of the medications that will be used to stop Eli’s heart, and the day she has the burdensome job of preparing the cocktail.

When everything was over and she was “no longer seeing him suffering or worrying about quarterbacking his care,” she recalls taking in all the video she had amassed. “I was able to look through the objective eyes of the camera and see all the people coming in there and what they were bringing in terms of grappling with facing a man that’s going to die.”

Ondi says that she only remembers her father as disabled. She was nine years old when, after leading an Air Florida meeting of 1,000 employees then running his usual six miles, Eli went in to the Doral Hotel spa for his weekly massage. The masseur who had worked with him for years would crack his neck as a usual part of the procedure. 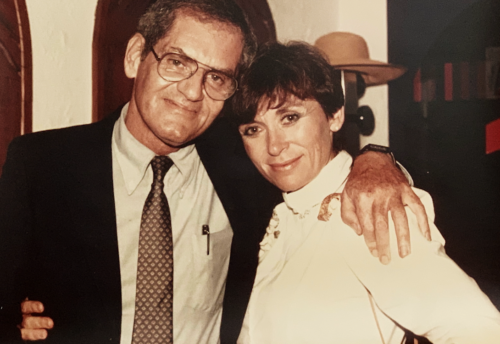 Eli and Lisa Doane Timoner when they lived in Miami. (Photo courtesy of MTV Documentary Films)

“My mom was watching television two days before and on ‘Hour Magazine’ she saw a segment about not having your neck manipulated because it could cause stroke. It was like a warning from above,” Ondi recalls.

Ten minutes after the massage, her father, then 53, collapsed in the locker room shower of the spa. He had suffered a stroke ultimately caused by the neck manipulation.

Life changed completely for the family. He was told to step down from the airline not long after the stroke. “On July 10, 1982, the board of directors said to him, ‘What do you think Wall Street will think of a cripple running an airline?’ ”

Ondi remembers their idyllic life for her mother and dad in Miami – “pillars of Miami society” before the debilitating stroke paralyzed his left side. “They were so active in bringing the arts to Miami – on the board of the Miami City Ballet, YoungArts and so many arts organizations.”

The family lived for a bit in Coral Gables, but she says her growing years were spent in South Miami, SW 101st Street and Ludlam Road. “I went to Pinecrest Elementary School and I remember riding bikes in our neighborhood. There was also one time when we had an alligator in our swimming pool and my mother didn’t believe it when my brother told her,” Ondi recalls.

Seven months prior to Eli’s stroke, on Jan. 13, 1982, Air Florida Flight 90 heading to Fort Lauderdale from Washington National Airport crashed shortly after takeoff. Investigators found that the cause of the crash was ice, snow and slush on the wings of the Boeing 737, which ended up dragging the plane down killing 78 people. 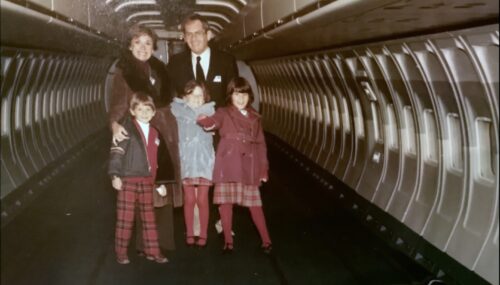 The Timoner family at Boeing headquarters in Seattle on Oct. 30, 1979. (Photo courtesy of MTV Documentary Films)

But it wasn’t that ill-fated flight that forced Air Florida into a tailspin and plunged Eli and his family into bankruptcy, according to Ondi. After his forced retirement, he was replaced by a man named Donald Lloyd-Jones. “He was the guy who pushed Dad out. He had only been there a month and after my father’s stroke he saw an opportunity to steal the airline. He apparently drank a bottle of vodka a day and did crossword puzzles while the airline went into the ground.”

In 1984, Air Florida went bankrupt and shut down.

There are glimpses of the heydays of Air Florida in the documentary and, as part of the film, Zoom calls lined up for people to say their last goodbyes to Eli, including some of his past employees.

Ondi says she’ll save the story of Air Florida for the narrative film she’s creating on the life of her father, the businessman. “I have wanted to do a documentary for so long about him and Air Florida, but there isn’t a lot of archival footage, so I thought I would make it another way.” She says she read him the script by his bedside during those final days of his life.

In “Last Flight Home,” Rabbi Rachel sits with her father for the vidui, the Jewish ritual of a final confessional. “The shame that he was carrying wasn’t the accident,” says Ondi, who makes it clear that there were four parties sued in the settlement for the series of deicing errors from that 1982 accident – American Airlines, Boeing, air traffic control and Air Florida.

“The confessional was more about the shame he carried about how he felt like a failure because he couldn’t provide for us.” 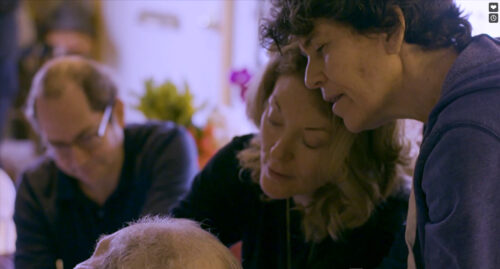 The siblings David, Ondi and Rachel with their father, Eli, in the film “Last Flight Home.” (Photo courtesy of MTV Documentary Films)

“Last Flight Home” will make audiences question their own mortality, she believes, and share in how it felt for Eli in his last days and the life’s lessons she watched him learn.

The film has left her with many things to think about, too, and her own fate.

She shares the story that while part of a question-and-answer session at the British Academy of Film and Television Arts recently, someone brought an interesting thought to mind. “‘ Do you think maybe you were born into this family and became a filmmaker so that you could make this film?’ ”

She’s come to a conclusion based on the query.

“I do think making ‘Last Flight Home’ was something I had been preparing for and it is part of my destiny,” says Ondi.