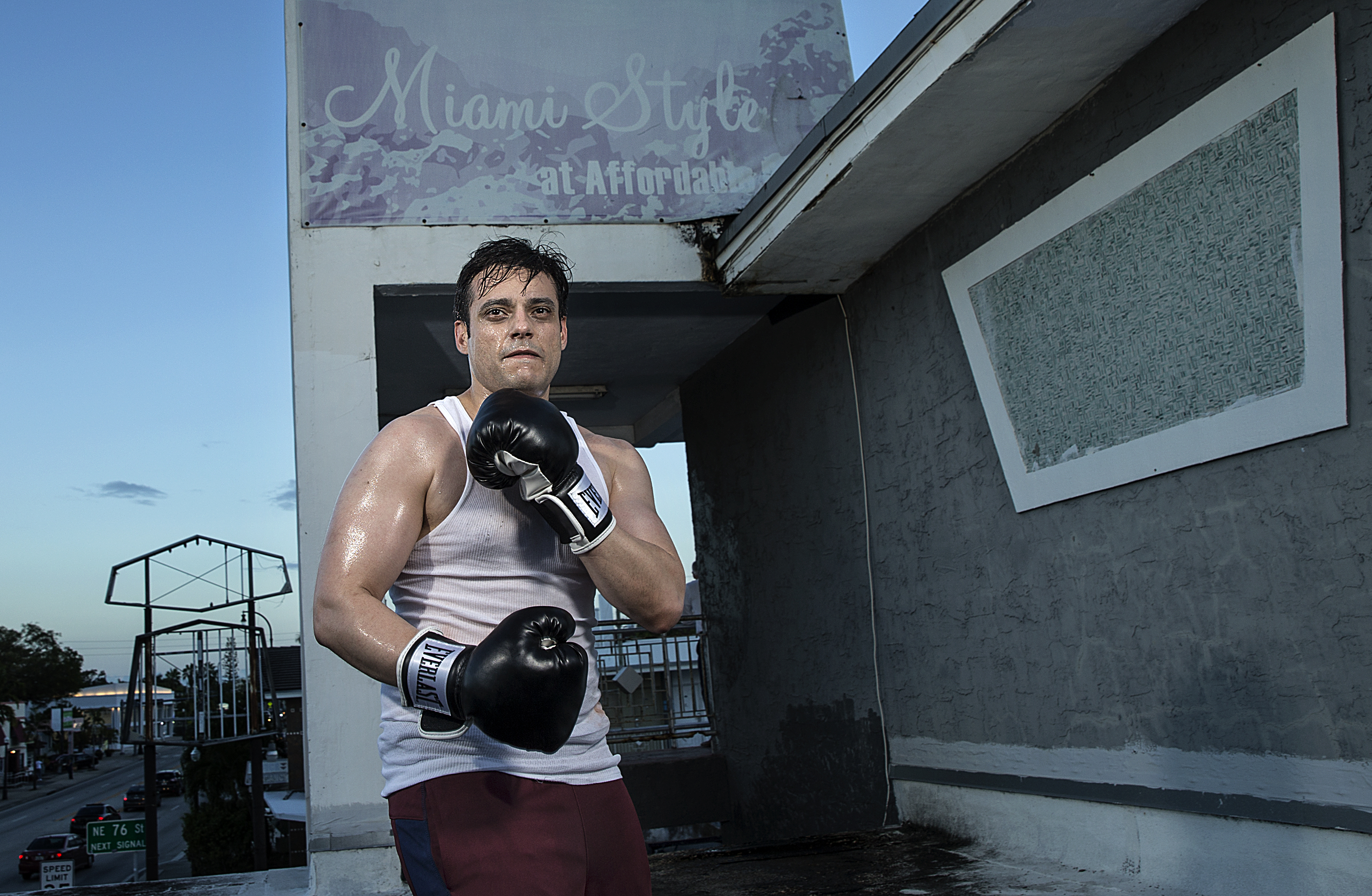 If the walls of Miami’s vintage Gold Dust Motel could talk, what stories would they tell?

Maybe they’d whisper the one about the Playboy Bunny shacking up, circa 1966, with the detective hired to bust her for stepping over the fraternization line. Or the mom in the ‘90s trying to get her teen son to stop hustling.  Or the 1959 newlyweds whose honeymoon takes a detour into marriage-wrecking vice.

Those dramas and more will come to life beginning Nov. 30 when Juggerknot Theatre Company fills multiple spaces at Motel Blu – formerly and once again to be named the Gold Dust – with the second edition of its buzz-generating immersive theater production “Miami Motel Stories,” this year taking place during Art Basel’s arts-intensive spotlight.

“Miami Motel Stories: MiMo” follows last fall’s debut version at Little Havana’s Tower Hotel.  Experienced by some 3,000 theatergoers during its extended run, the plays and monologues by playwright Juan C. Sanchez brought a 1920-era building and the vastly different kinds of characters who could have passed through it to life.

This illuminative process, led by Juggerknot founder and artistic director Tanya Bravo, has now shifted to the former and future Gold Dust at 7700 Biscayne Blvd.

Designed by architect Maurice S. Weintraub, the 66-unit, U-shaped motel had its grand opening on Dec. 21, 1957.  The Old West-themed building, with its trapezoid-shaped pool and open-air verandas with catwalks, at first attracted car-culture tourists and vacationing families who would venture out via 79th Street to Miami Beach on the east and Hialeah on the west.  Then, after I-95 opened and the neighborhood began a downward spiral into crime, drug dealing and prostitution over several decades, the property fell into disrepair.

With the neighborhood and its Miami Modern (MiMo) buildings now roaring back thanks in part to preservation-minded leaders like developer Avra Jain, the Gold Dust will get a restoration and reinvention like the one Jain’s Vagabond Consulting Group achieved with the nearby Vagabond Hotel at 7301 Biscayne Blvd.  The work at what will be christened the Gold Dust by Selina has begun, but in the meantime, Jain and her company have temporarily turned over the north side of the building by the Little River to Juggerknot for “Miami Motel Stories: MiMo.”

“Old hotels house memories. It’s very personal for people,” Jain says.  “How do you separate the arts and architecture? These buildings are moments in time that captured that tropical mid-century era…There’s a big public benefit to what Juggerknot is doing. It’s a service to the community, and Tanya sees this as an investment in the neighborhood.”

What Juggerknot aims to achieve with “Miami Motel Stories” is a kind of creative alchemy in which imaginative art, architecture and history come together in an intimate immersive theater experience that will reflect a Miami neighborhood over time.

At the Tower, because of the small size of the hotel rooms, only two people at a time could watch each 15-minute play.  The second-floor Gold Dust rooms are larger and have outside access, so each of the nine short plays will be seen by four “guests” at a time, with color-coded tickets (pink, yellow or blue) buying admission to three plays in an evening. Those theatergoers and others who opt to skip the more intricately scripted plays can also roam in a more free-flowing way around the motel’s first floor, where they’ll encounter the place’s married managers, a chatty bartender, a waitress, a commissioner, a bookie, a guy fishing and others.

The people and the place both matter.

“Yes, we have a script, but you have to allow the building to tell the stories as well,” Bravo says.

Some 30 actors, along with designers and a production team, will bring Sanchez’s stories to life under the experienced eye of Brooklyn-based director-playwright-puppeteer Mia Rovegno, a multifaceted artist with extensive experience in staging site-specific immersive work in non-traditional spaces.

“I’ve never worked in Miami, so it’s new and exciting to get to know the city this way. I’m lucky to do a deep dive into the culture,” she says.  “Every time we talk about the show, everyone erupts with their own stories…It feels like we’re triggering memories.”

Sanchez, a New World School of the Arts and Florida State University grad, twice lived in the MiMo neighborhood. He goes through an immersive research process as he’s coming up with his scripts, reading old editions of the Miami Herald on microfiche, reading books, talking to experts such as South Florida historian Paul George, pursuing threads of fact and rumor, interviewing people connected with the place he’s writing about.

“It’s a treasure hunt. It makes me feel connected to the community, so it’s no longer some ghost-like thing that happened in the past,” Sanchez says.

The stories, he adds, have to feel like they really might have happened in the space:  “You have to let the place talk to you. The minute you start forcing a story, you feel it, and it screams, ‘I don’t belong here!’”

Sanchez, says director Rovegno, “is insanely good at being able to differentiate all these voices and points of view. He’s such a rigorous researcher. Everything is the tip of a bigger iceberg. We all know there will be a rigorous dramaturgy behind these moments and lives.”

Bravo, who founded Juggerknot in 1998, has to attend to things large and small in what is essentially one end of a construction site.

“We had to work around everything,” Bravo says. “I had to find out what can we touch, what can we not.”

In the area used by Juggerknot, the dormant property had to get new paint from Sunny South Paint & Decor, air conditioning, working toilets. Don Bailey Jr. of Don Bailey Flooring supplied fresh carpeting. An array of period-correct furniture came from Goodwill and from pieces in several motels.  Partnerships with Chivas and Miami-Dade Transit, plus grants from the Knight Foundation and the Miami-Dade County Department of Cultural Affairs helped make a budget of just under $100,000 workable.

Creating immersive theater, Rovegno says, “is a different kind of process and commitment. You have to be a little bit crazy…There are two modes of working – scenes, which are very choreographed, and vignettes, which are more improv-based and invite more interaction.”

In a site-specific performance class she was teaching, Rovegno asked her students why they were drawn to immersive theater.  One told her, “It’s about being in the room together again.”

She adds, “It kind of broke my heart. People are craving intimacy, a real connection.  So many plays mimic what you’d see on screen. That ship has sailed.”

ArtburstMiami.com is a non-profit source of theater, dance, music and performing arts