Led by founder and artistic director Tanya Bravo, the company has no set performance space. Instead, it partners with developers to turn makeover-ready motels, hotels or special places (The Tower in Little Havana; the Gold Dust in MiMo in 2018; the former Wynwood Yard in 2019) into site-specific playgrounds for creators, actors and theatergoers.

From Feb. 8 through Feb. 29, it’s the North Beach neighborhood’s turn to get the Juggerknot treatment, starting at The Broadmoor Hotel on Miami Beach’s Ocean Terrace, then shifting over to the old Ocean Terrace Hotel, where most of the action happens.

Juggerknot’s resident playwright, Juan C. Sanchez, has written every one of the dozens of short plays for the three iterations of “Miami Motel Stories” as well as “Wynwood Stories.”

He’s collaborating for the fourth time with director Tai Thompson, who is working alongside New York-based director Ana Margineanu, co-founder of the immersive company PopUp Theatrics. A number of the 28 actors in “Miami Motel Stories: North Beach” have also been involved with the earlier Juggerknot productions, honing their immersive skills, getting accustomed to doing the same short show repeatedly each night for tiny audience groups in close quarters.

“It’s actually harder to write one of these now,” Sanchez says in a production office nestled inside the Ocean Terrace Hotel, its outside adorned with several “No Trespassing” signs. “You have to be mindful of not repeating yourself, not falling into a groove and doing it by rote.”

To that end, Sanchez has come up with a meta layer for the new production – one that everyone involved wants to keep secret until the opening. The theatrical stories he’s telling in his latest short plays take place over a period of nearly nine decades, from 1933 to the present, reflecting the area’s diversity throughout its history.

The characters this time include: a hard-boiled undercover woman reporter; a Hasidic woman and Hasidic young man on the cusp of change; an Argentine couple with a tumultuous relationship; a mobster; black and white classmates; a honeymooning New York couple; a domestic worker; the victim of a vicious mugging; squatters; and a certain notorious killer. Inside the Ocean Terrace, 18 rooms will be filled with plays and activity.

To create the plays, Sanchez did his now-customary deep dive into North Beach’s history and its different areas. He did research at the HistoryMiami Museum, spoke with the museum’s resident historian, Dr. Paul S. George, and Miami Design Preservation League historian Jeff Donnelly. He spent time at the North Shore Library near the beach and interviewed longtime residents who wanted their stories represented. Then, the playwright – who so often writes as he’s traveling by bus to and from his home on the mainland – did something different. 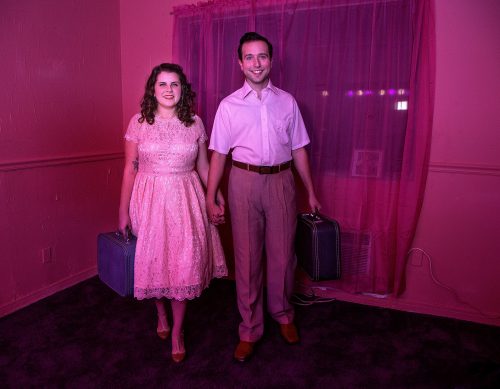 “I did talk to a lot of strangers this time. I came here every couple of days, and I’d ask what it’s like to live here. One or two of those interviews became stories,” Sanchez says, citing a play about squatters at the Ocean Terrace Hotel.

What began to coalesce for him were images of North Beach as a welcoming place of refuge and as the less glamorous stepsister to sizzling hot South Beach.

“One of the first things I found out about was the Biscayne House of Refuge, which was built in [1876] as a life-saving station and home to aid sailors lost at sea,” he says. “Then this became a family neighborhood for Jewish people, then Cuban Jewish people who had services in Spanish, then Argentines … welcoming became the spark.”

The North Beach vs. South Beach notion came from seeing “film crews every time I showed up. So I wondered: Is North Beach becoming the new South Beach? Is it winning the duel?” he says. “North Beach still has a bit of a hometown feel; I think the past is still here. So how can we theatricalize that? I’ve gambled with structure this time, but it’s important to take risks, especially with immersive work.”

Thompson and Margineanu are the directors tasked with bringing Sanchez’s creative vision to vibrant, precisely timed life. “Miami Motel Stories: North Beach” is told in four separate tracks, identified with color-coded “keys” – pink, orange, yellow and blue. Each runs 90 minutes, with 18 theatergoers per track divided into three groups of six each to be ushered in and out of the rooms where the stories get told. That’s a lot of simultaneous activity, for the actors, crew and audiences.

“Working together as directors is not the most common thing,” says Margineanu, a Romanian theater artist who has worked all over the world. “There are huge advantages, yet the ego gets hurt because you’re not the only shining star … But my philosophy is that this is how it should be in the mainstream more, because theater is the art of collaboration.”

Thompson adds, “There are some compromises … There’s a great amount of trust involved in making one cohesive show. We’re using each other’s actors, and they all have to be in a certain place at a certain time … It all has to be timed to the minute.”

Margineanu calls the immersive experience “a marathon,” in which theatergoers can choose their level of involvement.

“[Some] people are scared of ‘interactive’ theater, but what they’re really scared of is being put on a stage and having 100 people laughing at them,” she says. “People love to play, to be part of it for a couple of hours, to leave their problems behind and just go down the rabbit hole.”

Two of the actors who will take audiences down the rabbit hole are Susie K. Taylor and June Raven Romero. Taylor has performed in two previous Juggerknot productions, as the effervescent hostess Mrs. Wade in “Miami Motel Stories: MiMo” and as a chic, fuming gallery owner in “Wynwood Stories.” Romero, a transgender actor, gave a memorably intense performance as a trans woman who fought back against her attacker in “Veronica,” part of “Miami Motel Stories: MiMo.”

This time, Taylor is playing Deb, a woman who has made the life-altering decision to leave her Hasidic community in 1980. Romero is Madge, a tough reporter who has gone undercover to expose vice at the Jungle Inn in 1933. Both artists say that working in this kind of theater has made them better actors.

“I’ve become obsessed with immersive theater,” Taylor says. “When I’m doing [traditional] theater, my brain is bored, operating on one cylinder. This tickles your brain. It brings new people to the theater. This is so quick and close. People are on their screens all the time, and this is a bridge. A lot of people feel seen in this kind of theater.” 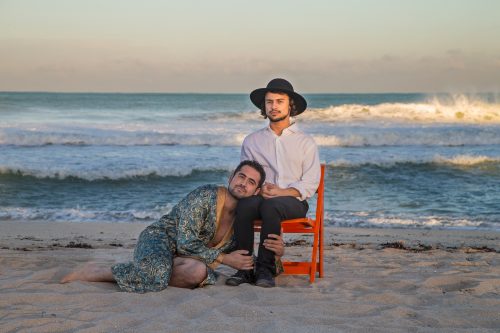 J.C. Gutierrez as a bartender has an encounter with Kevin Veloz as a young Hasidic man in “Miami Motel Stories: North Beach.” (Photo courtesy of Pedro Portal)

Romero, who describes her past experience of playing Veronica multiple times per night as “90 minutes of full-on panicking,” says that at times she has felt tokenized when she was called in for certain casting opportunities. But working with Juggerknot, a company in which the leaders, directors, designers, crew and many actors are women, has been different.

“I’m just another individual here,” she says. “You look at all of us and say, ‘Yeah, they’re diverse.’”

Bravo, who has been spearheading the production of “Miami Motel Stories: North Beach” for the past three months, acknowledges that she and her collaborators have reached the point in the process where they’re feeling exhausted. Producing such a large, complex show on a limited budget is tough and would be impossible without partner companies, cities and institutions – in this case, Perrier, Ketel One, Café La Llave, the city of Miami Beach, The Salvation Army, Dragonfly Thrift Boutique, Don Bailey, Ace Hardware and the Welcome Channel. And, of course, Ocean Terrace Holdings, which made space at The Broadmoor and the Ocean Terrace Hotel available.

“Ocean Terrace Holdings is committed to preserving the heritage that existed in the 1950s and ’60s along upper Collins Avenue and Ocean Terrace, and is looking to the past to inspire our future redevelopment plans for the block,” he says. “‘Miami Motel Stories: North Beach’ is the perfect opportunity to share our neighborhood’s story and provide the community a venue to engage in this unique, immersive theatrical experience, while underscoring our commitment to promoting the arts.”

Bravo is a firm believer in the future of immersive theater, a form she has played a major role in establishing in South Florida.

“It’s a trend now. It has great flexibility. You can do it anywhere. We’re planning to take it to Coconut Grove and Overtown,” she says. “There’s an immediate party feeling to it. And people in Miami want to go to an event.”