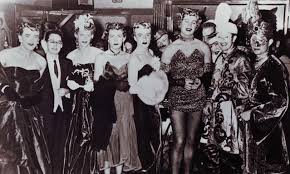 Robbie Rosenberg couldn’t have been more surprised when he found out the groundbreaking LGBT film he made 30 years ago was getting a showing at this year’s Berlinale, which opened in the German capital on Feb. 11.

Before Stonewall, the history of the gay and lesbian community before the Stonewall riots, which Rosenberg co-directed with Greta Schiller, will be shown on Monday, Feb. 15 as part of Teddy 30, a 30-year retrospective of LGBT films at what’s regarded as one of the most important film festivals in the world.

Each year, the Berlin festival features a retrospective, with this year’s focus on LGBT history in movies – “Seventeen pearls of queer film history,” touts the publicity for Berlinale, of which Rosenberg’s Beyond Stonewall will be part of the esteemed group. It’s the 30-year anniversary of the Berlinale’s Teddy Award, one of the few awards given to LGBT filmmakers outside of the gay film festival circuit. “This is not your average gay film award,” says Rosenberg.

Rosenberg, who lives in Miami and founded the Miami Gay and Lesbian Film Festival in 1999, didn’t even know the film was part of the tribute until someone sent him an article from Variety that mentioned the documentary’s inclusion.

“It’s interesting that the film is 30 years old, so it’s perfect for a 30-year celebration,” says Rosenberg, who, in addition to directing, co-produced the documentary with Schiller and John Scagliotti.

When it first opened in 1986, Before Stonewall was groundbreaking. The film, which opens with the words “The people who appear in this film should not be presumed to be homosexual — or heterosexual,” in a display of showing that homosexuals aren’t much different than other human beings, was quite an interesting proposition at the time. Before Stonewall is now a historical document in itself of the history of American gay life and goes back to the 1920s, the second World War, the wrath of the finger-pointing McCarthy era, and other social instances that led to the 1969 riot at the Stonewall bar in Manhattan.

The 16-mm film played for four weeks at the legendary Waverly Theater at Sixth Avenue and West Third Street in Greenwich Village when it was released in 1986. “That’s a long run for a documentary,” comments Rosenberg. With partial funding from the PBS, Before Stonewall aired to a television audience on PBS in December of 1986. “PBS gave us a huge amount of support and an amazing amount of faith. We expected backlash when it aired, but PBS didn’t get any. Maybe it was because it wasn’t a propaganda piece, but a way to understand a piece of cultural history.”

Nominated for a Grand Jury Prize at the 1985 Sundance Film Festival, it won two Emmy Awards in 1987 from its airing on PBS for Best Historical/Cultural Program and Best Archival Research.

“It’s interesting that we dealt with this broad panorama of LGBT history from back in the early 1900s to 1969, which has really become the traditional marker for the beginning of the Modern Gay era with the Stonewall rebellion.”

Rosenberg remembers that one of the most daunting tasks was locating archival footage. The movie relies on news footage, interviews, and even home videos. “Interestingly back then, no one had gone into places like the National Archives or the Library of Congress and had classified archives as ‘gay.’ It was like looking for a needle in a haystack.”

Rosenberg finds it wholly rewarding that “the film is about history and now the film itself has become a piece of history.”

Now steeped in Miami film and gay culture, Rosenberg ponders the idea of a South Florida Before Stonewall movie – “something about what it was like back in the day here when things were still in the closet.”

When asked if he has any plans to make that film, he says the time for him to create it has passed. He’s now wearing a self-described “three-prong hat,” working as a consultant with filmmakers, distributors, and movie theaters.

“I haven’t been doing much production in the last few years. I’ve been more involved with helping filmmakers get their projects to a point of being finished, then getting the films out there and getting them seen.”

He also works with Cinema Paradiso in Broward County, helping with its programming and thinking up creative ways of getting the two indie theaters in Fort Lauderdale and Hollywood noticed. “Before Stonewall definitely changed my life,” says Rosenberg, who says he was in his 20s when he teamed up with “the talented” Schiller and Scagliotti; Scagliotti did his own follow up in 1999, After Stonewall.

And, Rosenberg says, others tell him that the documentary changed their lives, too. “As the generations go on, people who are 35 now will say, ‘I saw it in my gender studies class or in my college gay studies class. …’ I feel that we wrote the first cinematic text on LGBT history and since then filmmakers have delved into all kinds of pieces in a deep way.”

He mentions the current Oscar nominated Carol. “I’m sure we showed an image of the book that movie is based on, the lesbian pulp fiction ‘Pillar of Salt.’ And I thought, we have a working discussion of that movie in our film. How cool is that to have those connections reaching back through Before Stonewall and the work that we did back in the early ’80s?”