The weekend street fair is a draw to the eight-day Miami Book Fair, buzzing with live music, art, performances, and live readings. (Photo courtesy of the Miami Book Fair)

Miami. The Magic City. Known for its nightlife, parties, and beaches. But this month, Miami becomes the Book City.

During eight days, from Sunday, Nov. 13 through Sunday, Nov. 20, the Miami Book Fair 2022 will host approximately 250 booksellers and exhibitors, and more than 500 authors with both in-person and virtual events in English, Spanish and Haitian Creole.

Among the authors that will meet readers at the Wolfson Campus at Miami-Dade College are Russell Banks (“The Magic Kingdom”), Matthew Ball (“The Metaverse: And How It Will Revolutionize Everything”), “Saturday Night Live’s” Kevin Nealon (“I Exaggerate: My Brushes with Fame”), Azar Nafisi (“Reading Dangerously: The Subversive Power of Literature in Troubled Times”), Patti Smith (“A Book of Days”), Anne McCrary Sullivan (“The Everglades: Stories of Grit and Spirit from the Mangrove Wilderness”), Maud Newton (“Ancestor Trouble: A Reckoning and a Reconciliation”), and Jose “Fat Joe” Cartagena (“The Book of Jose: A Memoir.”)

Kevin Nealon opens the Miami Book Fair with his memoir,  journalist and author Kathie Klarreich will participate in the fair with her anthology “Don’t Shake the Spoon: A Journal of Prison Writing, Volume 3.” (Photos courtesy of Miami Book Fair)

Miami Book Fair has been running for 39 years, making it one of the longest-running literary events in the country.

So, Miami, the Book City?

“Most definitely,” agrees Lissette Mendez, director of programs at Miami Book Fair. “I think Miami is known for much more now – lots of art and culture events have been nurtured and grown roots since 1984, when the fair was founded. The fair, which has always been produced by Miami-Dade College, was part of a small vanguard that proved you can enjoy the beach and the nightlife, but also books and literary culture activities,” says Mendez.

So apart from its leisure aspect, Miami is also gaining a reputation as a city of literature, and hundreds of authors contribute each year to make Miami stand out, especially local authors such as Christina Diaz Gonzalez, Edwidge Danticat, Julie Marie Wade, Nadege Green, Vanessa Garcia, Pablo Cartaya, Chantel Acevedo, Natalia Sylvester and many more.

Mendez says that a good deal of the book fair program is focused on Miami and Florida, featuring authors who live and work in this city. Their contributions have cemented Miami in the larger literary ecosystem as a place where great stories are written, whether in English, Spanish, or Creole.

As a city, Miami itself is the setting of many novels. Mendez agrees that there’s something about the city that makes it prime for writers. “There is so much going on in Miami all the time. So much history related to the many waves of immigrants who have contributed to the creation of Miami. There is so much mythology – going back hundreds of years. There’s just a lot of source material for authors to be inspired by, or to cover, in nonfiction,” says Mendez.

She says regardless of the genre the writers work in, whether it be poetry, fiction, or non-fiction, they all have something in common.

“(It is) the nuance they bring to these Miami- or Florida-centric writings. This is the level of detail about our home state and city that allows for a deeper knowledge and understanding and contributes to a more expansive view of what Miami is all about,” explains Mendez.

Miamian author Pablo Cartaya, who will sign “The Last Beekeeper” at this year’s event, takes great pride in calling the 305 his home. “Whenever I travel around the country discussing books with readers, I represent Miami with all my heart.”

“My abuelos called this place home after losing their beloved homeland in Cuba. My family is here. My community, and my culture. When you love a place, you feel great pride in coming home to contribute to a beautiful event like the Miami Book Fair,” Cartaya says.

A journalist and author, Kathie Klarreich will participate in the fair with her anthology “Don’t Shake the Spoon: A Journal of Prison Writing, Volume 3.” She describes her journal as unique in that “the voices of writers who have been incarcerated (and have been) are being shared with the public.” Klarreich says the writers will participate in a panel. “Their participation on our panel authenticates the voices in the book and adds a dimension to the reality that tens of thousands of writers face, not just in Florida prisons but worldwide,” she says.

Nadege Green will participate in the exchange of ideas with “More Than What Happened: The Aftermath of Gun Violence in Miami,” a community book written by Miamians about gun violence. 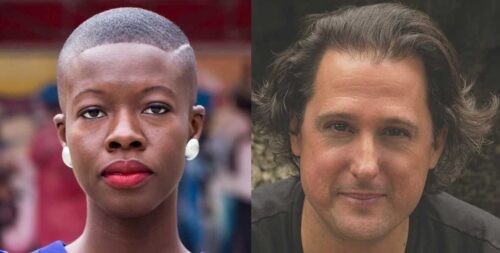 Nadege Green’s “More Than What Happened: The Aftermath of Gun Violence in Miami” is a community book written by Miamians about gun violence. Tackling another issue, Pablo Cartaya, wants to educate about the environment in “The Last Beekeeper.” (Photo courtesy of Miami Book Fair)

A longtime Miami Book Fair fan, an avid book buyer, a moderator, and reporter, the 36-year-old Haitian American author confesses that the book is all about memory, healing, grief, survival, resisting, and more.

“O Miami reached out to me to edit the last book in the ‘Miami Trilogy,’ a three-book series that speaks to our city’s most pressing issues. I immediately knew I wanted this book to be about local gun violence,” says the former WLRN reporter.

“We’re used to hearing about gun violence as a crime story, not a human story. What happens after? How do people process loss and grief over time? What does it mean to always be on alert at school because of the threat of shootings? This anthology made up of contributions from people in Miami delves into the interior of how our neighbors deal and react to this very real issue,” says Green.

Tackling another issue, Cartaya, wants to educate about the environment in his dystopian middle-grade publication, “The Last Beekeeper.” Set about 125 years in the future, a pair of sister bees are fighting greedy forces in order to save the world’s last bee colony and repopulate the earth’s crops.

“I wrote this book taking into account the increasing intensity of natural disasters across the world,” Cartaya says, recalling the Texas freeze a few years ago and Hurricane Ian that swept through Florida’s west coast recently.

“I want young people to imagine a world where nature has done her worst. The novel is set in an isolated, desolate world. As humans begin to rebuild, the battle between technology and nature rages once again. The question I leave for my young readers is: What side do they want to be on? With respect to living with nature or with an over-dependence on technology? The choice is theirs,” the author concludes.

Miami is, as we all know, a multicultural city with a kaleidoscope of cultures, whether Hispanic, Caribbean, Caucasian, Haitian, or African American. The organizers say they ensure the fair reflects this diversity.

“There are authors and books that reflect all of these cultures and themes and topics that explore most facets of life,” says Mendez. “I particularly love that even when a culture is not as widely represented in Miami as in other cities or states, we bring those authors and books to the Fair too – for example, our 2022 emphasis on stories from the Middle East and South Asia.”

Because Miami is a Hispanic and Caribbean city, there is a space dedicated to Hispanic and Caribbean authors. In the IberoAmerican Authors section, fair participants can find conversations and panels with noted Latinx and Hispanic authors, journalists, poets, essayists, storytellers, and visual artists and photographers who travel to Miami Book Fair each year to share their work and thoughts.

The Read Caribbean section presents literary events centered on Haitian and Caribbean diaspora including readings and panel discussions, storytelling for children, music, and more. Florida has the highest Haitian population in the country, with most of them settling in Miami. Every year, Haitian authors are invited to discuss literature and other related topics. This year is no different as the book fair has invited authors Jacky Lumarque, Herold Toussaint, Michel Frantz Grandoit, Phillipe Matthieu and journalists Marie-Lucie Bonhomme, Frantz Duval, and Roberson Alphonse to talk about Haiti. 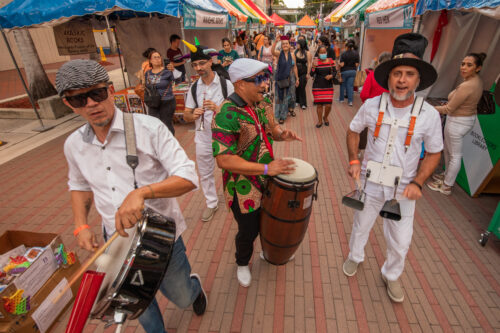 Miami Book Fair launches on Sunday, Nov. 13, with an evening with “Saturday Night Live” alum Kevin Nealon on his book “I Exaggerate: My Brushes with Fame”, and Alan Zweibel, author of “Laugh Lines: My Life Helping Funny People Be Funnier: A Conversation.”

The fair will continue during the week with the “Evenings with” series, which are “intimate conversations” between the authors and their audience including notable names like Harvey Fierstein with his memoir, New York Times bestselling author Michael Pollan talking about his book “This Is Your Mind on Plants,” Charlayne Hunter-Gault with “My People: Five Decades of Writing About Black Lives” and former Dallas Cowboys coach Jimmy Johnson talking about his book “Swagger: Super Bowls, Brass Balls, and Footballs: A Memoir” joined by Sun Sentinel newspaper sports columnist David Hyde.”

The weekend street fair is another draw where, through the streets of the Miami Book Fair, is an open-air marketplace where books and everything related to writing, including pencils, pens, journals, and stationary, are sold over three days from Friday, Nov. 18 through Sunday, Nov. 20.  There’s also entertainment including a street fair buzzing with live music, art, performances, live readings, and activities for the kids at Children’s Alley.

“Our vision is to build a community of writers, readers, and collaborators across all disciplines and cultures in South Florida,” says Mendez.