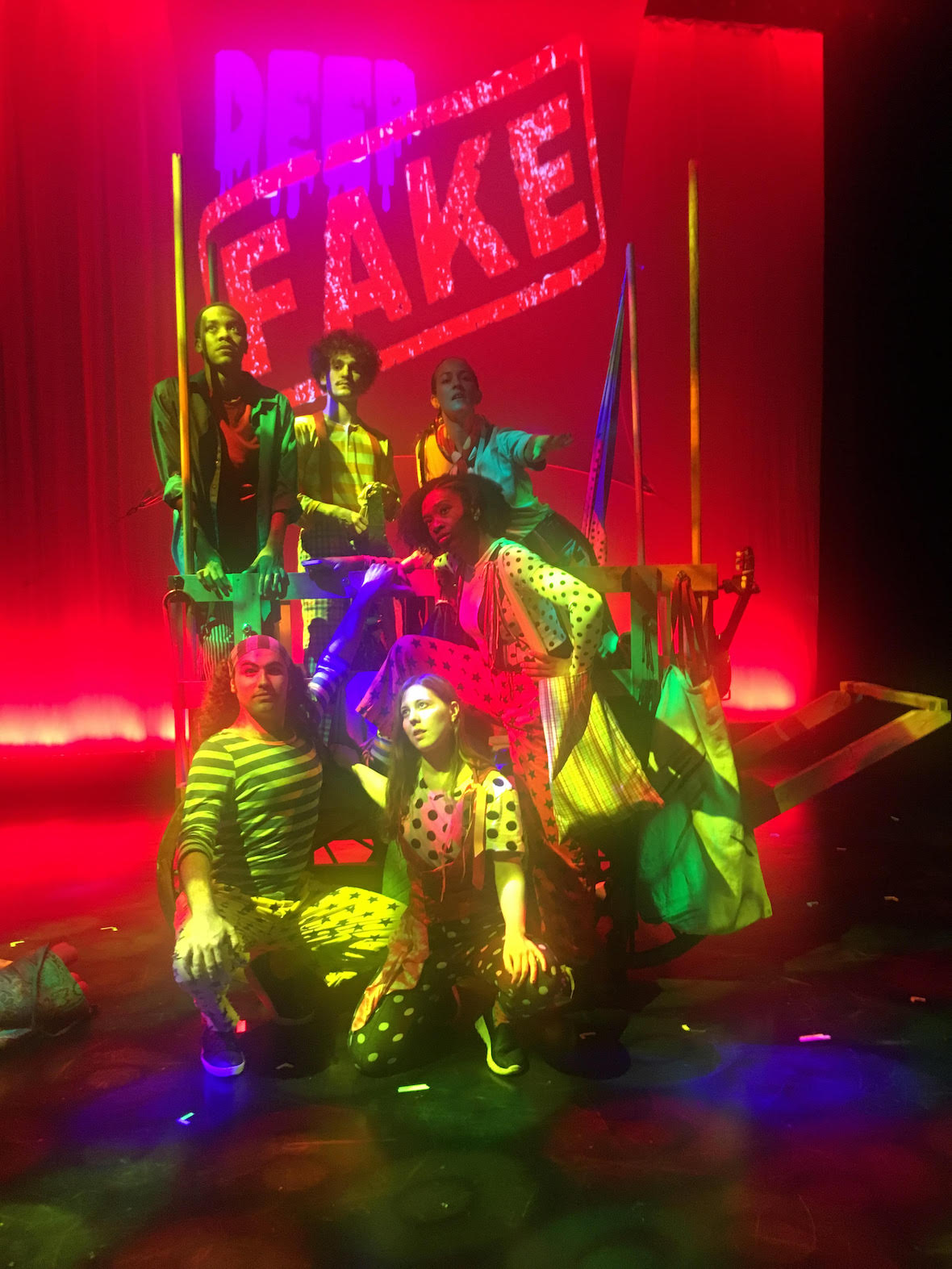 Fantasy Theatre Factory’s first foray into theater for general audiences, “DeepFAKE” at Miami’s Sandrell Rivers Theater, plays like a modern version of “Godspell,” not so much in its subject matter — “Fake” isn’t about understanding the Gospel according to St. Matthew — but in trying to make sense of current affairs. Similarly, like the merry band of players in the 1970s musical, a group of high-spirited wanderers tries to find meaning in a place that has become confusing.

On the surface, the painted faces and the clowning around belie the fact that there are some serious issues floating about. Purposely, all six players in “DeepFAKE” are nameless and almost genderless, only identified in the program as Player 1, 2, and so on. The ensemble includes Devin Riley, Kevin Rubi, Joel Añón, Connie Pezet, Andrea Brown and Kamilah Douglas. Deborah Kondelik directed and conceived the sociopolitical satire.

Miami-based Fantasy Theatre Factory has been around for almost 40 years, with its primary focus as an arts-in-education children’s theater touring company. In 2016, the company became the managing operator of the new Sandrell Rivers Theater in Liberty City, a Miami-Dade County Department of Cultural Affairs facility. Since then, Fantasy Theatre Factory has been expanding its programming with a film series, live-music series and a new-play competition.

“DeepFAKE” is the company dipping its toe into presenting original work. Rather than mounting an already scripted play, their first “adult” audience offering was birthed through “devised theater,” in which there is the conception of an idea but no script. The play is meant to take shape collaboratively by the director, actors, designers and production crew. Often, but not always, collaborative theater addresses social issues.

In this case, it most certainly does. In fact, the title “DeepFAKE” refers to a new technology that uses artificial intelligence to create inauthentic video content. The fake content looks and sounds like the real thing but is meant to promote a false agenda. Deepfakes usually use face-swapping to superimpose images in video, whereby a politician or celebrity will appear to be making a statement about something that hasn’t really happened in reality. Look deeply into some of the messages in the play, and the title will come clear. It is never specifically explained.

The players go through a series of seven scenes, contemplating everything from immigration to America’s fascination with celebrity and wealth, and the prevalence of fake news. The play begins with three cast members (the women) on foot trying to find a new home, when they run into three others (the men) who are traveling on a makeshift wooden caravan with wheels that don’t really spin.

For the theater-savvy, there are tips of the hat to classic playwrights and literary greats such as Eugene Ionesco, Henrik Ibsen, Charles Dickens, Bertolt Brecht and, in the aforementioned scene, Samuel Beckett. The dialogue seems very much inspired by the absurdist comedy “Waiting for Godot.” It mirrors Beckett’s commentary on the human condition in which life is a series of redundancies. In “DeepFAKE,” Player 2 (Rubi, who is made up to look like Groucho Marx) says, “All I know is that every morning we get up, floss our teeth and notice that we are precisely in the same spot as we were before.”

The characters break into a rap as they contemplate the idea that home could be just a state of mind. They despair in the fact that they aren’t really welcome anywhere. “We’re at the beck and call of those who build the wall,” they rap.

In Scene 2, a projection on the back wall shows an evangelist in a video that mimics CNN, promising redemption to those who will follow her. The Players become panhandlers begging for money from the audience. (Fake money is given out with each program. Mickey Mouse, the Statue of Liberty, and Jesus are in the center of the “$100” bills). Of course, the evangelist is corrupt, and all the money is swept up by the evangelist’s minion (Añón eagerly scooping up the money).

One of the most charismatic scenes involves Player 4 (Pezet) as a carnival barker whose job is to introduce someone “very important and influential” who appears in a projection on the back wall. The projection shows the head of a man — a dark blob — who gestures with his hands while speaking gibberish. The barker lavishes praise on the “terrific” leader, the “broad-shouldered” leader, the “enormously well-endowed” leader. When a voice in the crowd, Player 5 (Brown) shouts the truth, “The leader has no head!” she is accused of treason.

The “world-class leader” then becomes the judge, now appearing on the projection still faceless but with a powdered white wig. The barker says, “the judge” will be “fair and balanced” in front of “the largest audience ever assembled in the history of a play.”

Other issues addressed are the power of wealth and what people will do to climb the social ladder. Going down the requisite environmental rabbit hole, the play finds a whistleblowing mad scientist (Rubi) on the run after he’s blown the lid off plastics manufacturing to tell the world that the particles from the materials in the air and ocean are deadly. Then, it’s game over, or so says the projection of a Pac-Man-type video game.

The 90-minute play (including a 15-minute intermission) is madcap and zany, and the six actors work well as an ensemble, each getting a chance to play multiple characters. The projections serve as yet another character of sorts and add a distinctive storytelling element (Kacey Kopoloff’s work amazes). There are many technical cues, and nothing misses a beat. The technical director is Kenyatta E. DeShazior. Izabella Orelle and Jodi Delaventura are also part of the production team.

Whether it’s a drawback or a delight is up for debate. There’s definitely a hint that “DeepFAKE” was honed in a factory that creates children’s theater, apparent in its approach and atmosphere. On the other hand, that could add to the satire of the commentary, and the concept of making a cacophonous circus out of contemporary America’s crises is wildly imaginative. That’s what makes “DeepFAKE” original.