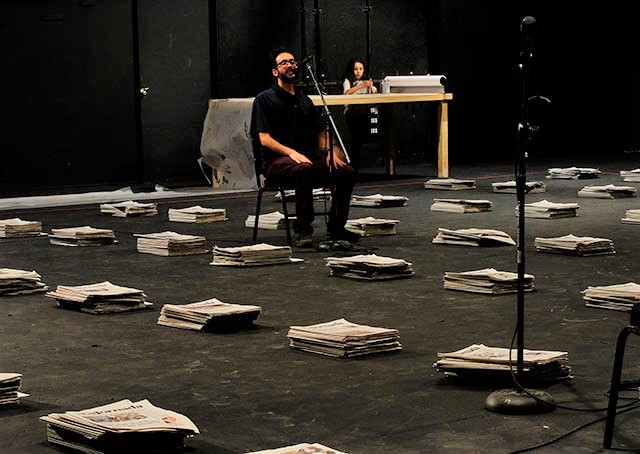 Mexico City-based theater collective Teatro Ojo’s works are constantly evolving. Nothing is ever really finished. That’s because they take from every performance. Whatever the audience experiences, observes, feels, and offers feedback, which they highly encourage, all is used, considered, and included in the evolution of the same piece, or introduced into another new work.

Two of the company’s founding members, Héctor Bourges and Patricio Villareal, are bringing Teatro Ojo to Miami for the first time for “Disorganizing Mimesis,” what they classify as a lecture-performance, on Saturday, March 10 at 7:30 p.m. at the MDC Live Arts Lab. Admission is free with an RSVP.

Founded in 2002 in Mexico City, the troupe is known for its avant-garde works, and it isn’t easy to put a label on Teatro Ojo. One writer described the company as “theater without theater, where the stage is the world itself.”

In this case, the way into their latest work is to deconstruct the title. Mimesis is a noun, which means the “deliberate imitation of the behavior of one group of people by another as a factor in social change.” Villareal says that’s exactly right. Their goal with this particular work, which they have performed in various cities in Mexico and in Los Angeles, is “to take observers on a journey through different fragments of history, with the starting point being Mexican history, but somehow gathering other fragments. As a spectator you have influence on how the performance unfolds, and how it moves forward. What we want to do is produce a conversation, not just perform. This is the way we continue to build up these disorganizations.”

A series of gestures with images of historical events that have influenced the Mexican national identity are shown on a projector. Villareal says it’s “done in a delirious way, where these fragments, which some people would think don’t relate to one another, do.” In what he says becomes a “game between words and images.”

The company describes “Disorganizing Mimesis” as a performance that takes on everything from the last Aztec emperor, Montezuma, in 1520 to the unmasking of Subcommander Marcos, the leader of the Zapatista rebel army in 1995. The audience’s “journey” is an idiosyncratic and twisting tour of Mexican history.

Teatro Ojo’s works are unconventional, and political. “Yes, that is at the center of what we do, while universalizing it. When we are talking about Montezuma, it’s not just in the Mexican context, but connecting it with the present; what we have to say about what is going on now and how that present affects all of us.”

The troupe, made up of Bourges, Villareal, Karla Rodríguez, Laura Furlan, Gisela Cortés, and Emanuel Bourges, Teatro Ojo was founded in 2002 and has evolved in the past 16 years from purely presentational to iconoclastic, what they say is a “dismantling of theatrical apparatus.” One of their most talked about works was presented at the 2012 Belluard Bollwerk International Festival in Fribourg, Switzerland. For the installation Xipe Tótec Ponte en Mi Pellejo (“Put Yourself in My Shoes”), they produced several latex skin bodies from different models with different origins and life experiences. The skins hung in a stall inside a shopping mall, Fribourg Centre, where anyone who wanted to could put themselves into the skin of another.

For another project, the stage of El Galeón Theater in Mexico City, was turned into a call center. “We had 17 actors telephoning in the space of four hours all over the country, asking questions to whoever answered about the past, present, and the future. People would answer if they wanted to, or, they would just hang up. Everything was recorded. We want to use part of that material in ‘Disorganizing Mimesis.’ ”

In essence, what Teatro Ojo does is not disorganized at all. “Art,” according to the company, “is the device that allows space and time to be removed; to produce that which continues to generate other scenes.”