Mad Cats’s ‘Why Not?’ A Wild Election Ride 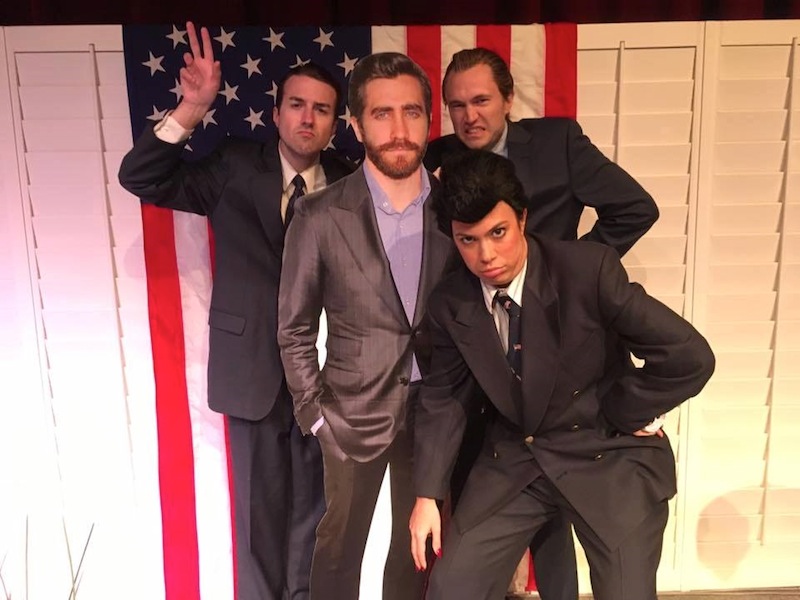 The devolution of discourse in the current presidential race is, duh, obvious to anyone with a TV or internet access. Maybe you see the political back-and-forth between Donald Trump and Hillary Clinton as the down-and-dirty rhetoric of two fighters approaching their title bout. Maybe you want to hide under the bed until this singularly incendiary race is over.

But if you’re worried that the candidate you despise would lead the country to hell in a handbasket, there’s this: At least neither is Richard Nixon.

Miami’s Mad Cat Theatre Company has concocted a trippy comic contemplation of what an uncensored, 21st century version of the late president might be like in “Why Not? With Richard Nixon.”

Written by artistic director Paul Tei and company members Jessica Farr and Theo Reyna, this world-premiere piece running in the SandBox at Miami Theater Center through Sunday was developed from a workshop version presented on Miami Beach in April.

Staged by Tei, “Why Not?” imagines that Tricky Dick is somehow among the living, hosting a late-night public access TV show from his home in Key Biscayne. Gleefully anachronistic – and why not, if the star is a dead president? – the play establishes from the get-go that we’ll be spending time with the foul-mouthed Nixon of the secret White House tapes, not the guy who brought the Vietnam War to an end and reestablished diplomatic relations between the United States and China.

This Nixon, speaking from a bathroom just offstage, advises his daughter that he’s “clogged up like the Golden Glades interchange.” During his TV show, he plays games (ala Jimmy Fallon) with Rebozo, Rubio and Clinton, but Nixon has a tough time going for more than a few sentences without saying something vulgar, racist or sexist. There are musical interludes, too, including “Let’s Dance,” “Sundown” and “Something Stupid.”

Plenty of the lines and/or the spin the actors put on them are funny; for example,Trump is described as having doused himself in Mountain Dew and fallen asleep in a toaster. But other bits aren’t as inspired, as when Rubio emerges in a beekeeper’s helmet and gloves, carrying a fly swatter, to talk about Zika, then turns to his old friend the water bottle for comfort. Clinton is portrayed as no-nonsense, quick and smart, but then the authors make a statement about her ambitious love of the spotlight by having her pleasure herself with a microphone. Yuck.

Levine is a skilled and wildly uninhibited actor-singer whose Nixon comes off as a cross between the ex-prez and the late TV variety host Ed Sullivan. Burgess is a charmer (and drinker) as Rebozo, a boyish cliché generator as Rubio and, near the end, an equally interesting Nixon doppelganger. Farr plays Nixon-Cox as a kind of Barbie Doll-Stepford Wife, Clinton as a tough customer. And briefly, she becomes Nixon doppelganger No. 2.

“Why Not? With Richard Nixon” is amusing (largely), crass and nutty. But unlike the current race for the White House – also crass and nutty – “Why Not?” will make you laugh instead of weep.