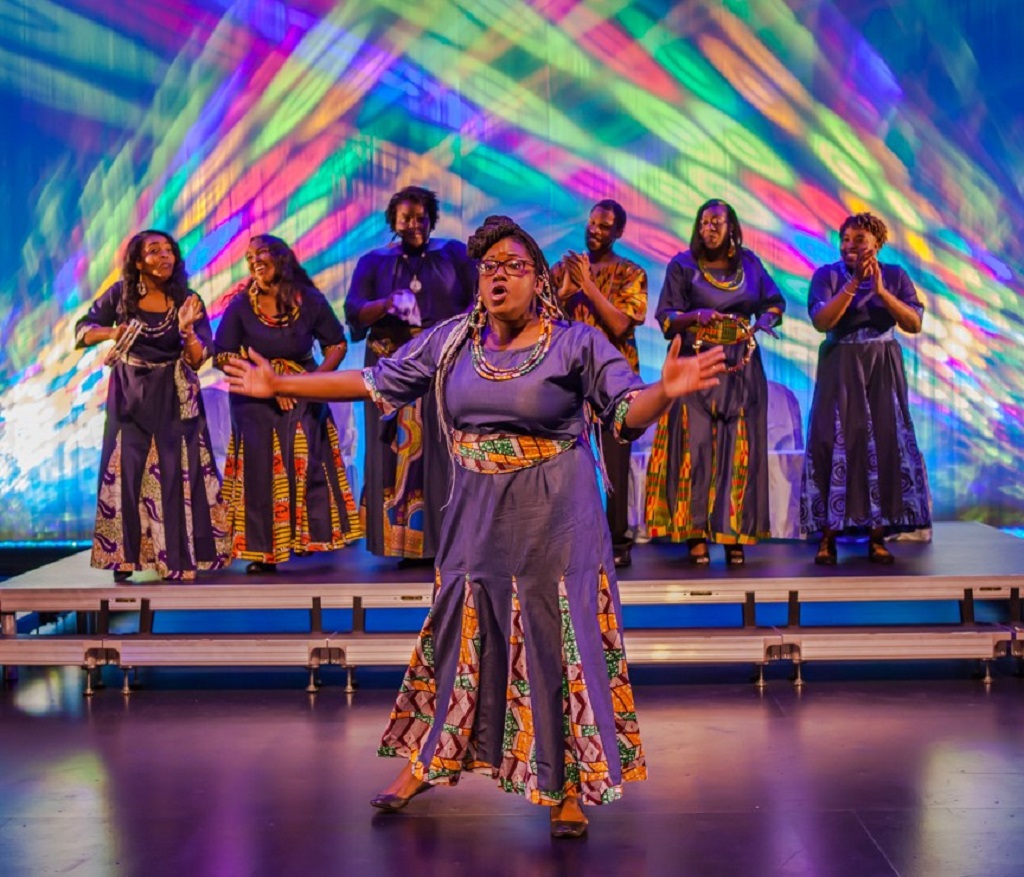 At the beginning of the month, Miami’s M Ensemble won five Carbonell Awards, more than any other company except Zoetic Stage.

Now M Ensemble is rejoicing and saying thanks in its own artistic way with a new production of “God’s Trombones.”

Crafted from the 1927 book “God’s Trombones: Seven Negro Sermons in Verse” by novelist, poet, songwriter and activist James Weldon John, the show combines dramatic delivery of its seven pieces of verse, rousing spirituals and moving hymns sung by a small but mighty choir, and expressive dance that underscores the message in movement.

Watching “God’s Trombones” feels very much like being in church.

Directed by John Pryor, with musical direction by David Minus Jr., the production is staged simply. Shirley Richardson is responsible for the African-influenced costumes, and much of the show’s visual impact comes from Mitchell Ost’s gorgeous, color-saturated lighting.

A lectern serving as the pulpit is brought on and off, so that the show’s “ministers” – Isaac Beverly, Jean Hyppolite, Ray Lockhart, Joseph Long and Brunson – can deliver their impassioned sermons.

In front of the platform, the show’s dancers – the breathtaking Jeffery Cason Jr. (who serves as choreographer), Brianna Placide, Milik Wright and Willandra McGahee – enhance the emotional impact of the songs and Johnson’s words.

Each of the actors playing a minister shares a familiar Biblical story in the form of a sermon, the delivery capturing the rich variation in preaching styles.

Long begins with the warm, imaginative “Creation Story.” Lockhart’s rhythmic, rich baritone as he delivers “The Prodigal Son” is an example of why Johnson called his book “God’s Trombones” – the poet was likening the timbre of the human voice to the sound of a trombone.

Brunson’s emotion-filled “Go Down Death” relates the journey of a suffering woman to eternal peace in the arms of her savior. Hyppolite’s “Noah Built the Ark” digs back to the story of Adam and Eve’s fall from grace, misogynistically blaming women for the downfall of men over six millennia, then speaking of the cleansing of the world through the great flood. Later, the actor tells the story of Moses in “Let My People Go.”

Beverly’s “The Crucifixion” vividly evokes the pain and agony of Jesus’ last hours. And in “The Judgement Day, Long uses fiery oratory to evoke images of an apocalypse that – God willing – won’t torch mankind any time soon.

The choir is full of powerhouse voices, and most of the singers get to take the lead on at least one number. Chiverton leads the choir on “Old Time Religion,” then moves on to “Listen Lord.” Makeba’s “Great Getting Up in the Morning” introduces the dancers, including the awe-inspiring Cason, who is apparently not bound by the laws of gravity.

Gracel, who just won the best actress in a musical Carbonell for her performance as Effie White in Stage Door’s “Dreamgirls,” leads the singers on “Come and Go With Me to My Father’s House.” Brunson’s belted “Peace Be Still” is deeply stirring. Patrice closes the first act with a rousing “Didn’t It Rain,” a swirl of bright post-flood colors behind her.

Forming a quartet, Makeba, Woods, Chiverton and Gracel contemplate the crucifixion as they sing “Were You There.”  Long sings “Go Down Moses,” then Woods leads the rousing “Down by the Riverside.” Makeba and Gracel lead a final medley, “It’s Gonna Rain.”

The one element of the show that needs refining is the sound balance. More than a few times the leading singers’ mics aren’t adjusted properly, and they’re drowned out by the instrumental accompaniment. And when you have as many hallelujah-inspiring soloists as “God’s Trombones” does, they deserve to have every word of praise clearly understood.