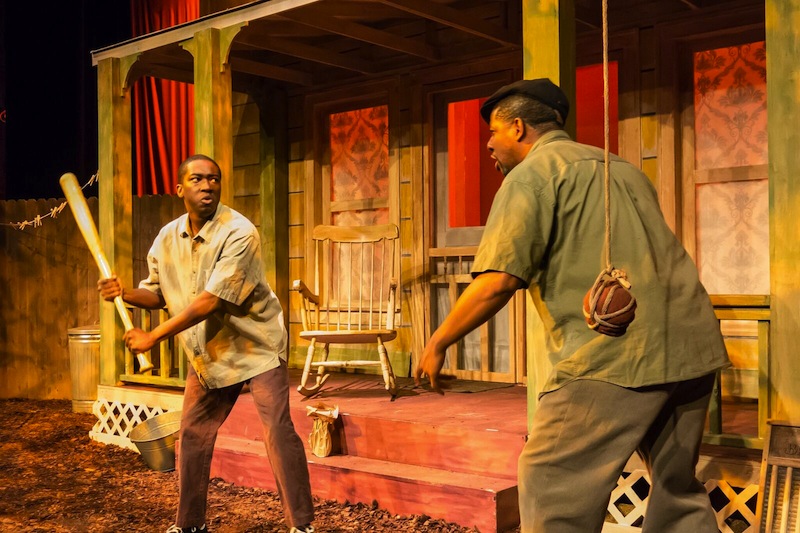 Among life’s many lessons is this one: The boundless dreams of youth soon give way to the harder realities of adulthood.

Troy Maxson, the flawed man with the outsized personality at the center of August Wilson’s Fences, knows this. He has learned it, lived it, yet finally lets no-strings-attached fantasy lead him astray. And in the process, what he has doggedly built comes tumbling down.

Miami’s M Ensemble has tackled the Pulitzer Prize-winning Fences – indeed, all 10 of the career-making plays of Wilson’s Pittsburgh Cycle – before, first staging Fences at the Bakehouse Art Complex in 1990. But the 45-year-old company, South Florida’s oldest continuously operating professional theater, has now circled back to Fences in a powerful new production.

The run is brief, just through Father’s Day, and there is thematic irony in that closing day, given the iron-fisted way fatherhood plays out in Troy Maxson’s life. But theater lovers and admirers of Wilson’s towering work should make a point of seeking this show in the Carrie P. Meek Center at Miami’s Hadley Park, for many reasons.

A key one is that the production features the final Miami stage appearance of Ethan Henry and Makeba Pace before the married actors move to Los Angeles to take a shot at work in film and television.

In Fences, the much-admired, Carbonell Award-nominated duo play what they are, husband and wife. But their happy union is very different from the Maxsons’ complicated marriage, which is passionate, yes, and dutiful, but undermined by Troy’s temper, his tenacious emotional scars and his self-centered weakness.

Tony Award winners Denzel Washington and Viola Davis are now returning to the characters for an HBO movie version of Fences adapted by Pulitzer winner Tony Kushner, and it’s easy to see why: Troy and Rose Maxson are great roles, resonantly ordinary people infused with the mythic power that makes Wilson’s characters so memorable.

In M Ensemble’s intimate, John Pryor-directed production, Henry and Pace exquisitely navigate the rhythms of Wilson’s language, a distinctive combination of the vernacular and the musically poetic.

Troy and Rose, a garbage collector and his wife in 1957 Pittsburgh, have ordinary conversations or arguments about work, food, money, sex and their soon-to-graduate son, whose dream is to play football in college. But the two also have speeches that become arias, soul-scorching revelations that Henry and Pace perform with heartbreaking power. The actors are, in fact, younger than the characters they’re portraying. But they fully, intelligently, emotionally inhabit a husband and wife headed for disaster.

Their world, here designed by Rachel Finley, is a small house with a front porch, a grassless yard and a work-in-progress fence. It is there that Troy drinks and shoots the breeze with Jim Bono (Chat Atkins), an old friend he met when both were doing time. Troy’s elder son Lyons (Jovon Jacobs), a musician, swings by now and then, usually to borrow money.

The yard is usually a battleground for Troy and his younger boy Cory (Roderick Randle), a kid repeatedly wounded by his damaged father. Troy’s brother Gabriel (Keith C. Wade), a man transformed by his injuries in World War II, brings agitation, a childlike sweetness and the vision of a world beyond this one whenever he stops by – and Wade’s remarkable, heart-wrenching performance in the role brings the play to a shattering close. Near the end of the play, a little angel of a girl named Raynell (Sumaiyah Wade, Keith C. Wade’s daughter) helps heal a family.

Pryor, who also directed M Ensemble’s first production of Fences, deftly guides his cast through the rocky emotional terrain of Wilson’s play, the ebb and flow of comedy and tragedy enhanced by a jazz score composed and arranged by the director’s son Shawn.

Yes, there are laughs in Fences; life is seldom all joy or all sorrow. But the cumulative power of the play belongs to the world of tragedy, to Henry’s ferocious performance as a flawed man undone by desire.