Legends Party and Grow in ‘One Night in Miami’ 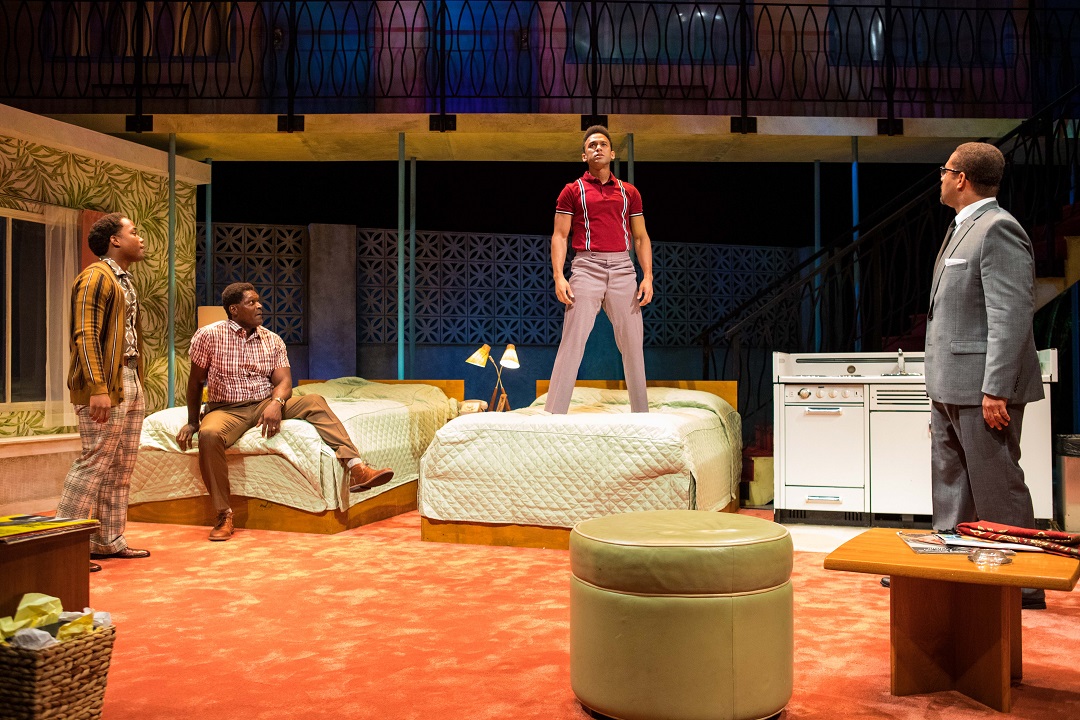 Strictly speaking, Brown knows. But the only member of that superstar quartet still living hasn’t shared details of a night that happened more than half a century ago.

So through a combination of research and imagination, journalist-turned-playwright Kemp Powers has filled in the blanks in “One Night in Miami,” which is now getting its South Florida premiere in a superb Miami New Drama production at Miami Beach’s Colony Theatre.

Entertaining, enlightening and deeply moving, the play imagines what the four real-life friends might have said to each other during that long evening in Malcolm X’s motel room in Miami’s Brownsville neighborhood.  They partied there because segregation laws prevented them from staying on swanky Miami Beach, where the cocky and soon-to-be controversial Clay had just staked his claim to being the greatest fighter of all time.

Staged by Miami native Carl Cofield, associate artistic director of the Classical Theatre of Harlem, “One Night in Miami” blends humor, history and thought-provoking ideas about black male leadership on a night just four months before the Civil Rights Act of 1964 became the law of the land.

Artfully constructed to stir variegated emotions in the fly-on-the-wall audience, the play allows for conflict, laughs, cutting remarks, persuasion.  Each man gets time in the spotlight, and observers come to understand the complexities – and the dangers – inherent in their lives as successful black men in a country rife with racism.

As Clay, who will announce the next morning that he is joining the Nation of Islam, Kieron Anthony conveys the young champ’s joyous confidence as he reenacts moments of his life-changing fight for his famous friends.  He dials up the rhetoric and swagger when he goes outside to speak with the reporters who finally track him down, but with his friends he’s willing to show he’s still grappling with embracing and declaring his faith.

Esau Pritchett’s imposing Brown is an athlete who has always lived life his way.   Though he comes to the Hampton House wanting nothing more than a party – drinking, finding yet another willing woman who doesn’t care that he’s married – his story of a visit to his birthplace of St. Simon’s Island, Georgia, is a vivid reminder of just what fame doesn’t change.

As the provocative Malcolm X, Jason Delane is part philosopher, part gadfly.  Understanding each man’s leadership potential, he isn’t afraid to push hard: Speaking to Cooke about the singer’s desire to cross over to a broader audience, he says, “You’re just a wind-up toy in a music box, or a monkey dancing for an organ grinder to them.”  And he adds, “The bottom line is, it’s too important a time to be wasting a brilliant creative mind on pandering.”

Yet it’s Delane who infuses the play with its strongest sense of foreboding. Increasingly at odds with Nation of Islam leader Elijah Muhammad, his Malcolm X knows that the “security guards” outside his room – FOI (Fruit of Islam) paramilitary officers Kareem (Jovon Jacobs) and Jamaal (Roderick Randle) – are there to watch him and report back.  And in less than a year – he does not know this, but we do – he will be assassinated by three of his Nation of Islam brothers.

Leon Thomas III’s Cooke, appropriately enough, embodies the soul of the play. Music does that, and the young actor-singer, who has a string of impressive Broadway credits and who starred as Andre Harris on Nickelodeon’s “Victorious,” is a formidable talent. He shows us the creative Cooke (alone in the room initially, he works on the song “Put Me Down Easy”), the entrepreneurial music executive, the superstar entertainer (he reenacts a thrilling number from his concert at Miami’s Harlem Square Club) and the deeper artist Malcolm X had challenged him to become.

Near the end of “One Night in Miami,” Thomas sits on a hassock, strumming Cooke’s guitar, singing at first for Brown, then for the others and for a theater full of people who soon begin weeping. The song is “A Change Is Gonna Come,” that anthem full of lamentation, sorrow and hope, and it exquisitely conveys what Powers’ play is all about.

The production itself is impeccably designed. The striking set by Christopher and Justin Swader places the legends in a room within ‘60s-era landmark, its palm leaf wallpaper and pale green quilted bedspreads offset by a rich peach rug and curtains. Lighting designer Alan C. Edwards creates the effect of outside lights reflecting off the motel’s pool, bathing Kareem and Jamaal in an undulating glow as they stand on the Hampton House’s second-floor walkway.

Costume designer Lex Liang dresses the men in fine ‘60s casual wear and the FOI guards in proper uniforms.  Sound designer Abigail Nover kicks off the action with an audio sampler of the Clay-Liston fight, so that when the men enter the room, we’re as energized as they are.

“One Night in Miami” falls squarely within Miami New Drama’s mission, which is to tell the stories of the many different communities that make up richly diverse South Florida.  This one was written by a Los Angeles playwright, and it’s about four superstars who weren’t from Miami, though Clay’s transformation as a boxer and man of faith are inextricably woven into the city’s history.

Yet this play, so steeped in fact, myth and feeling, feels like it has finally come home. And Cooke’s cry for change still resounds in our sorrowful, fractious, hopeful world.