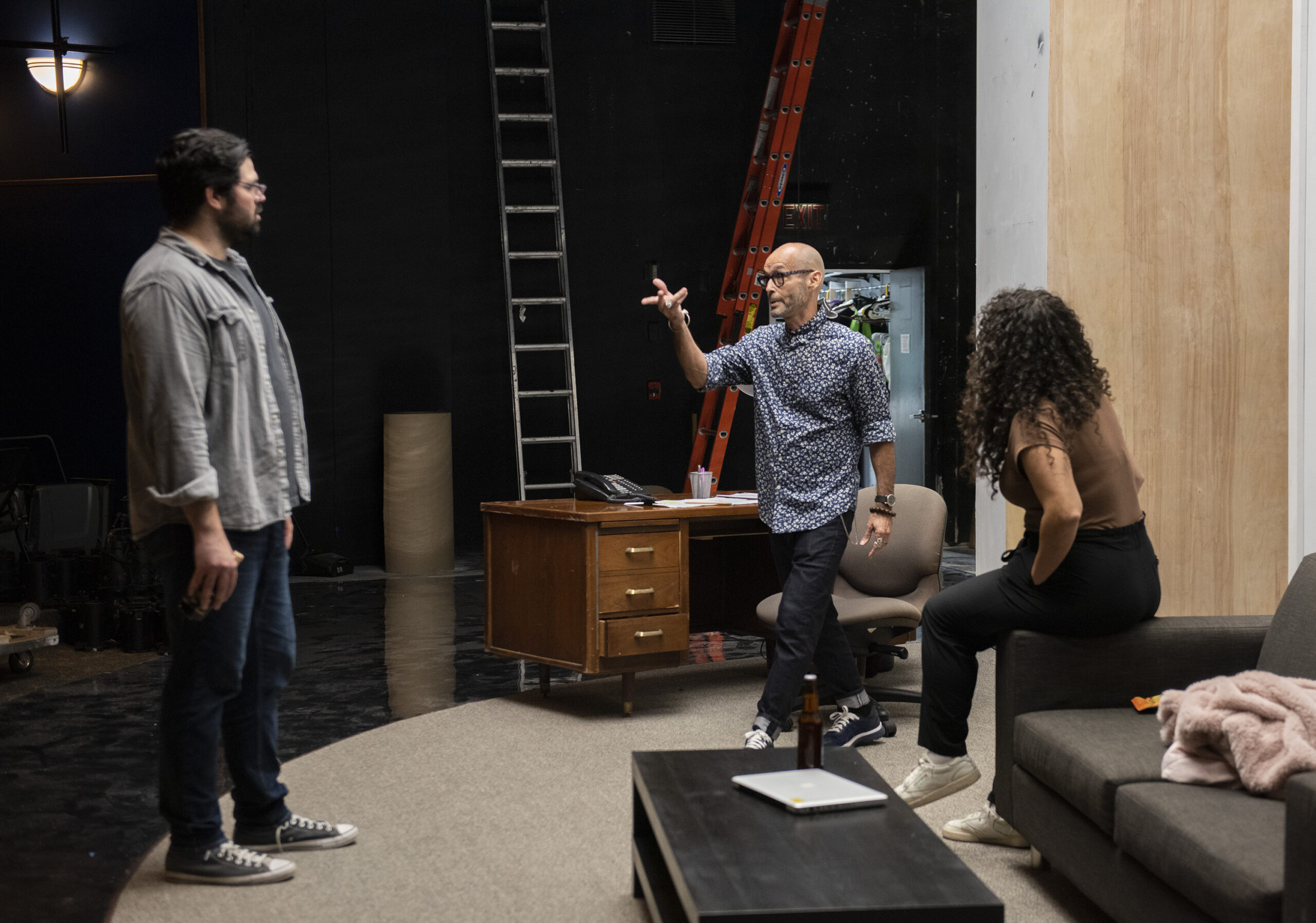 Tanya Saracho’s “Fade” is a smart, rueful workplace play that draws from the playwright’s imagination as well as her experiences when she was making the move from theater to television.

That’s what creative people do. They live and observe, sometimes folding that material into their work in ways that can make others unhappy.  Which happens in “Fade,” opening on Saturday, Aug. 20 at GableStage.

As Bari Newport, GableStage’s artistic director, observes, “Life is complicated, and so is art.”

When Newport became the company’s leader following the death of producing artistic director Joseph Adler, as she was thinking about her 2021-2022 season, she considered some plays GableStage had already obtained the rights to present. “Fade” was one of those. 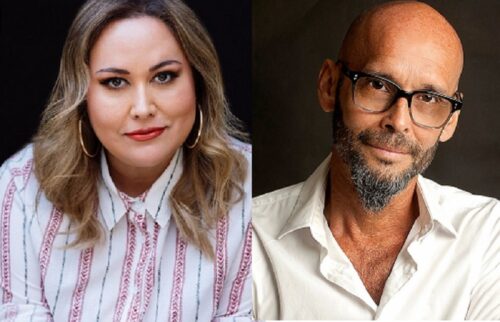 She found Saracho’s voice “fast-paced and fresh,” she says, a good fit for the theater’s audience. She also felt the way the playwright explores classism within a particular community (in this case, both characters are Mexican-American) might encourage more theater lovers from Miami-Dade County’s Latinx majority to discover GableStage.

Performing “Fade” are Alexandra Acosta, a Colombian-born Miami-raised actor now based in New York, and Carbonell Award winner Alex Alvarez, a Cuban-American actor from Miami whose past GableStage appearances include “The Motherf**ker with the Hat” and “Stalking the Bogeyman.”

Acosta plays Lucia, a Mexican-born novelist and novice television writer who is the only Latina in her show’s writers’ room, a “diversity hire” as she’s openly told.  Alvarez is Abel, a janitor and Los Angeles native entrenched in his family’s Mexican culture.  After an awkward start – Lucia switches to rapid-fire Spanish, not realizing that Abel barely speaks the language – the two become friends and empathetic listeners. For awhile.

Saracho, who was born in Mexico and raised in Texas, built her theater career in Chicago as an artistic director, playwright, actor, and activist.

She co-founded Teatro Luna and The Alliance of Latinx Theater Artists of Chicago, had her work produced at a number of Chicago theaters (Steppenwolf Theatre Company commissioned her adaptation of Sandra Cisneros’s “The House on Mango Street”), and acted in Luis Alfaro’s “Electricidad” at the Goodman Theatre, which co-produced “El Nogalar” (Saracho’s set-in-Mexico adaptation of Anton Chekhov’s “The Cherry Orchard”).  Her growing reputation led to commissions from a number of major regional theaters.

It was while she was supposed to be working on one of those, a musical biography of Mexican singer-actress-dancer Lupe Vélez for the Denver Center Theatre Company, that the seeds of “Fade” were planted.

Though her day job then was as a writer on Lifetime’s “Devious Maids” – for a time, she was the only Latina writer on a series about four Latina maids – in 2014 she participated in a playwrights’ workshop at the Center Theatre Group in Los Angeles.  She struggled to produce pages to share with the other writers.  Instead, she would complain about her TV job, until another group member said, “Why don’t you write about that?”

It took time and a couple of iterations, but that’s how “Fade” came to be.

“It started like therapy, but it became bigger once I’d started writing.  It’s been great to step back and see it finished. It became its own thing,” Saracho says by phone from Los Angeles. 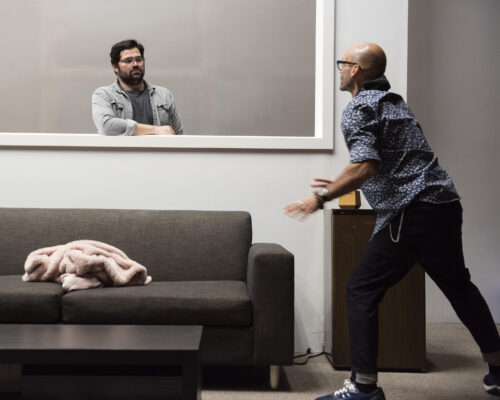 “Abel is based on three janitors who would start working at 6 p.m. I’d stay until 11 p.m., trying to learn Final Draft (a screenwriting program). When the janitors went on strike, I joined the picket line.  In Chicago, I did theater for marginalized people; at Teatro Luna, we were very political.  But in Los Angeles, the showrunner said, ‘No, don’t do that.’”

Becoming the show’s stated diversity hire while not knowing exactly how writing for television works was lonely and frustrating. Once, she says, “I was called ‘Spic and Span’ in the writers’ room.”

Nonetheless, Saracho persisted and became a master of her new craft, writing for “How To Get Away With Murder,” “Looking” and other shows. She created and served as producer-writer-showrunner on three seasons of the LGBTQ+ Latinx “Vida” on STARZ, leading a largely female, queer, Latinx writers’ room.  For Anonymous Content, she has turned her 2014 play “Mala Hierba” into a movie that she’ll direct.

In their own successful arts careers, Castellanos, Alvarez and Acosta have encountered the issues threaded through “Fade.”

Castellanos last worked at GableStage as an actor in the 2011 production of “The Brothers Size” by Tarell Alvin McCraney, the “Moonlight” Oscar winner, playwright and head of the Yale School of Drama’s Playwriting Program.  When McCraney was growing up in Miami, Castellanos – whom McCraney calls his “father in theater” – was his mentor.

“Classism and colorism is very, very alive in the Latinx culture.  Tanya captures it in a way that’s not holding the individual responsible. These characters begin to unravel and unlearn,” says Castellanos, who was drawn to the play because of the complexities of its characters and its sociopolitical issues.  “Each Latinx culture has its own unique traits and practices – there are vast differences in them.” 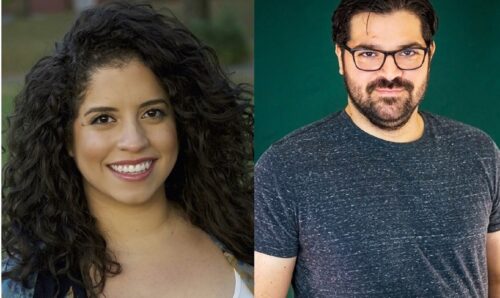 Making her GableStage debut, Acosta is elated to be working at home.  In 2018 she read “Fade,” which was produced in New York in 2016, and fell in love with the script.

“Tanya captures the class divide so brilliantly.  Lucia’s experience is similar to mine:  the loneliness you feel when you’re the only Latina in the room, and the connection you feel when you meet another one,” she says.

During the pandemic, theaters nationally did a deep dive into their practices, including limited opportunities for Latinx and BIPOC artists.  Change seems to be happening, with more plays by artists of color being produced and more work for actors, designers, and technicians. But how real and lasting are those changes?

“I think there’s been a ton of work available for Latinx actors at a smaller scale. I’ve been a part of many new play readings that feature Latinx characters, but they hardly ever become full productions,” says Acosta.  “I think there has been a slight shift, and we’re heading in the right direction, but we definitely need fresh new stories to be told and new voices to be heard.”

“Awareness is the first step. So many of us are embracing it. Some are fighting hard against it,” he says. “It took us 400 years to get here. I don’t think it will go away overnight. We must stay vigilant.”

Alvarez performs at theaters throughout South Florida, most often in non-Latino roles. He moved to Los Angeles from 2001 to 2009, hoping to find work in movies or television, but what he encountered was stereotyping and frustration.

“In L.A., you have a sense of what people want from you from the moment you enter a room,” he says. “They’d say, ‘Why don’t you do this with an accent?’ Everybody assumed I was Mexican. For them, there was no other kind of latinidad.” 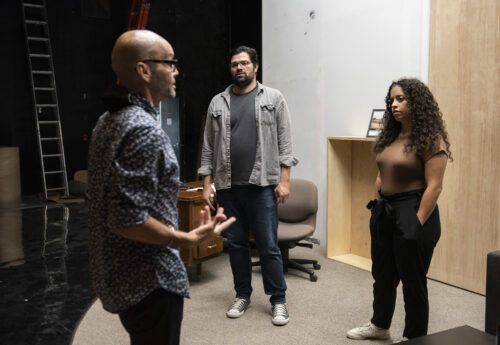 Working with Castellanos for the first time, he appreciates the director’s approach to “Fade.”

“He emphasizes the importance of the story, of decolonizing the work. He’s really conscious of not treating this as if it’s just a well-made play. He’s aware of the themes and perspective – this is not a Eurocentric ‘great American play,’” says Alvarez, who is also a playwright and teacher.

The actor is also intrigued by the way Saracho explores class in “Fade” and impressed by her craft.

“Class is something we don’t talk about as much as ethnicity.  We can get very myopic regarding our own experiences,” he says. “The play is clever, funny, light and not so light, accessible. Once you start to inhabit the character, you realize this is really smart. There’s such rich nuance.”

As for Saracho, her continuing success in Hollywood has meant she’s essentially stopped writing for theater.  Outspoken as ever, she has plenty to say about what Latinas encounter in both worlds.

“In the 16 years I did theater, nothing moved.  The talk was great. I would get Latina-related commissions, which is how I got into those (major regional theater) spaces. It was tokenism,” says Saracho, who turned to acting and voiceover work to help pay her rent when she was writing plays.  “The American theater does not take care of its playwrights. They have to teach or come to television.  The creative voice is not valued in that way.  I was mad at the system, the marginalization, not the art form.”

While she loves writing in an extended form for television and film, Saracho remains dubious about Hollywood’s embrace of Latinx artists.

“There was a similar reckoning in the summer of 2020 towards radical inclusion.  Now it’s 2022, and James Franco is playing Fidel Castro (in the upcoming movie ‘Alina of Cuba’),” she says.  “Change didn’t happen.  I think it’s bleak. Hollywood is showing us what they think of us.  Erasure is almost worse than stereotyping.”

WHAT: “Fade” by Tanya Saracho