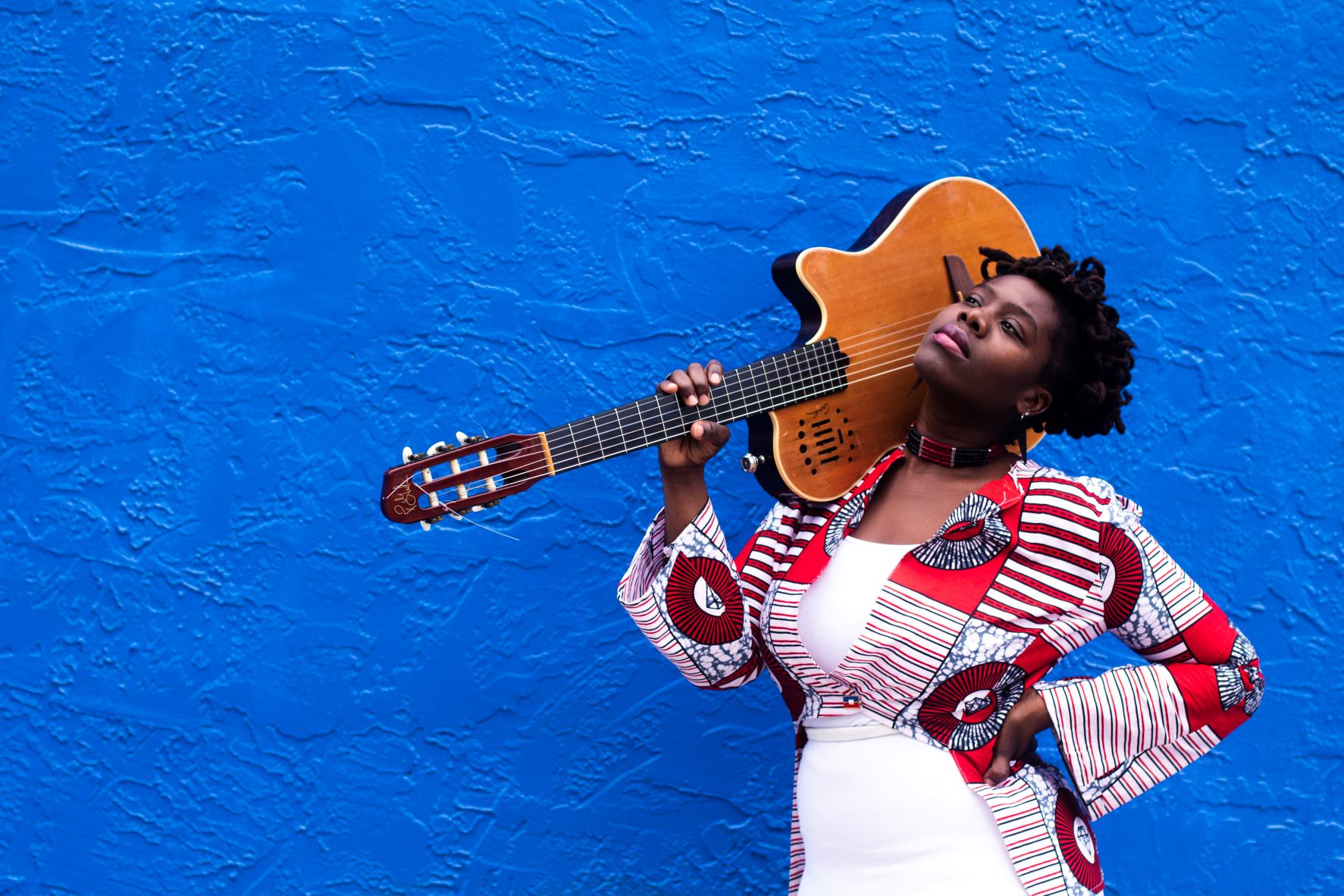 Inez Barlatier, a Haitian-American musician and educator, is working with Caballero and Lornoar, a Cameroon-based singer-songwriter, on “Sharing Grandmothers.” (Photo courtesy of Inez Barlatier)

Like many in the performing arts community, Carlos Miguel Caballero, a Cuban-born actor and theater director, was left reeling from the effects of pandemic closures. Then he heard about available funding through the Knight New Work 2020 grant program.

It was a most welcome lifeline. “I wrote the application with my heart,” he says.

His dream was to collaborate with Inez Barlatier, a Haitian-American musician and educator, and Lornoar, a Cameroon-based singer-songwriter. Together, they wanted to produce “Sharing Grandmothers,” a music and theatrical dance performance that focuses on the human exchange.

The group is now on its way, as one of nine Miami winning projects sharing $300,000 in funds slated for artists and their projects through the John S. and James L. Knight Foundation.

The awards are just the latest round of funding from Knight New Work 2020, which was created last year to support the performing arts community during the COVID-19 pandemic. The foundation allocated $10,000 each, first to 18 Miami-based artists and art organizations, then to 19 community leaders who got to direct the grant money to a person/group of their choosing.

Now, this new batch of artists have until year’s end to complete their pieces.

Adam Ganuza, program officer on the Knight Arts team, said the funds provide one way to help artists get back on track.

“They are all incredibly talented, and they are all doing fantastic work,” Ganuza says. “We have artists being incredibly creative under enormous constraints.” 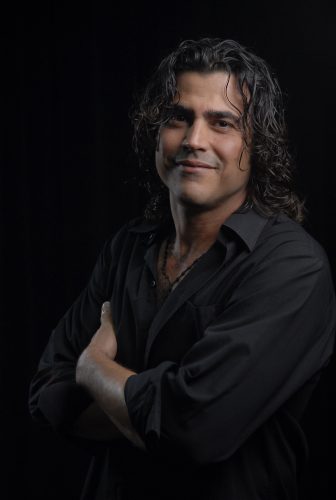 Carlos Miguel Caballero, a Cuban-born actor and theater director, is working on a co-production entitled “Sharing Grandmothers.” (Photo courtesy of the artist)

For Caballero, this includes working with those who don’t speak the same language. Even though it’s a bit of a hurdle, the collaborators of “Sharing Grandmothers” all tap into universal experiences and messaging presented throughout a theatrical piece with original music and dance.

“It’s a very simple history about love and about life,” Caballero says. “It’s a great story about a cultural richness that is very powerful.”

One of the themes they will focus on is the cycle of life, says Barlatier.

“The show is telling a story about our people, from death to rebirth,” Barlatier says. “We’re going to start by giving thanks to our ancestors and the women who came before us.”

The performance is also meant to offer a message of unity, particularly to those who have a connection with the African diaspora, she says.

“The more I learn about my culture, the more I learn how every culture of the African diaspora is connected in some way,” she says. “And though we have our nationalities, in the end, we just were dropped off in different places. And so, this project is just that story.

“It’s important to know that this story is also a lot of people’s story in Miami,” she adds. “It’s not only about Cameroon, it’s about Cuba, it’s about Colombia, it’s about Bolivia. It’s about all the cultures that were touched by the movement of Africans before they even were called African.”

Also investigating movement in his piece is Juraj Kojs, director of the Foundation for Emerging Technologies and Arts and assistant professor at the University of Miami’s Frost School of Music. But the focus of his music composition for voices, instruments and computers, entitled “Where Home Is,” relies on immigration.

As a recently naturalized U.S. citizen from Slovakia, his explores what it’s like to relocate to another country.

Kojs describes himself as an “artphibian,” one who isn’t afraid to plunge headfirst into an array of artistic disciplines. His flexibility has allowed him to find new ways to express himself, and he offers encouragement for those who are struggling with the new artistic landscape.

“As an artist, you just can’t stop because art does not allow you to do that,” he says. “We can keep on making art. We don’t have to be paralyzed because we aren’t making music in a concert hall.”

His unique and steadfast approach has led him to launch his piece in an unlikely location: “We’re doing it in this incredible garage,” he says, with a laugh.

The experience includes going up and down escalators with 11 floors of performances, engagement activities, musical expression and theatrical dance.

“This will be all tied to immigration because all of the performers and participants are immigrant women,” he says.

In fact, he reveals that it was an immigrant woman who initially sparked the idea.

“What motivated this whole project is my great-great-great-great-grandmother, who came in the early 1900s to work in Chicago as a cleaning lady. In many ways, she inspired me to come to the States,” he says. “I was always curious. What did she experience? I wondered what it would have been like for a woman with potentially no language skills but [who] had the determination to make life better for those who she left behind.”

It’s a good question. If only he could travel back in time to find out … 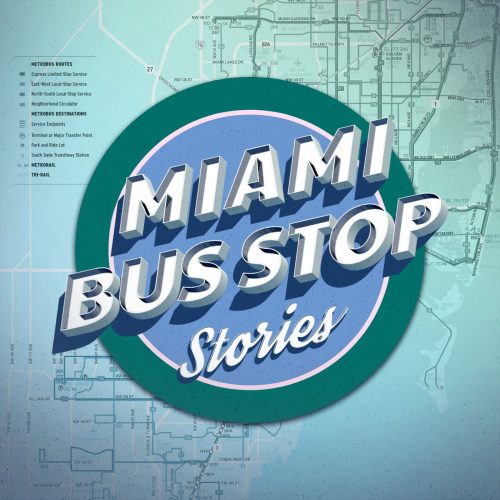 The creators of Juggerknot Theatre Co.’s “Miami Bus Stop Stories,” plan to do just that.

The theatrical production company, known for its popular “Miami Motel Stories,” will use the Knight funds to host virtual bus tours for students to hear from “historical figures” from various Miami neighborhoods, including Liberty City, Little Haiti and Coconut Grove.

“The idea is that they’re dropped off at a specific moment in time in neighborhoods when something pivotal happens,” said Tanya Bravo, Juggerknot’s founder and executive artistic director. “They will encounter a live person, an actor, and communicate with them from a different time period. By the time they finish, they will have an idea of what are some of the important moments that happened in those neighborhoods.”

For example, she said, they’ll learn about Overtown: “What was it like when the I-95 overpass was built through Overtown? How did it impact them?”

The bus tours will be part of an ongoing learning experience: “We’re also creating a resource guide and an activity book for the teachers, so that the conversation can continue” after the tours, said Bravo.

The Knight funds were a game-changer for Juggerknot.

“It allowed us to take a moment in time and really pivot and look at things in a different way because for us it was really difficult. We had to close our show, ‘Miami Motel Stories: North Beach,’ during the pandemic,” Bravo said. “It would have been impossible for us to do anything live, and also immersive during that time because we work in very small spaces. So, for us to be able to do something virtual and challenge ourselves to get as close as possible with our audience, but obviously, with a screen between us, was something really exciting.”

Despite the virtual component, “Miami Bus Stop Stories” will provide an in-depth view of the neighborhoods while challenging any preconceived notions.

“Virtual can be incredibly impactful if done the right way,” said Bravo. “So it’s a really great way to strip away any stigma and see what these communities are like. Let’s peek in there for a little bit, and maybe we’ll see that we’re not as different as we think we are.” 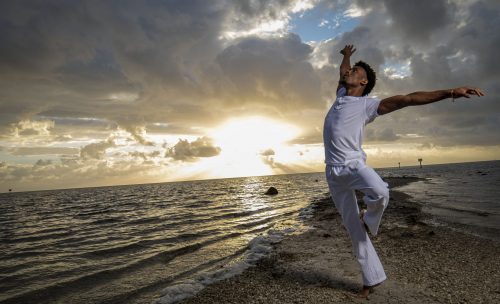 Melissa Cobblah Gutierrez delves into what it means to be a Cuban woman of African descent in “CuBlack: Invisibilized No Further!”

Gutierrez, who was born on the island and raised in Ghana and Cape Verde, is a choreographer, performer and educator whose dance film and performance is intended to open conversations. Examining ideas about race and historical oppression is an important way to address issues in the community, she says. Her piece aims to provide both a voice for the voiceless and a platform for the Black community in Cuba. 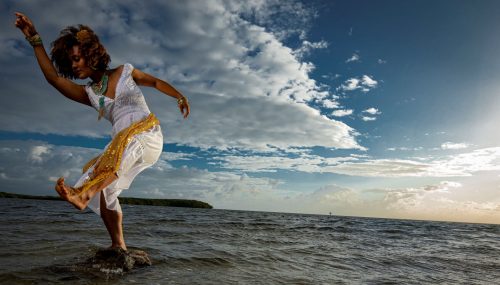 Gutierrez’s experiences will serve as a backdrop. Arriving in the United States at age 14 was a balancing act, she says, as she embraced her Latin roots as well as the African-Americans who welcomed her.

“I am still part of the African-American community. The Afro-Cuban experience is a spectrum, but we are also close to our African roots. It’s going to be an interesting process, and I can’t wait to hear other people’s experiences,” she says, of the research part of the project. “I would love for everybody that comes to the theater to see themselves reflected in my work,” she says.

The other winners and their works, as described by Knight New Work 2020:

Fereshteh Toosi — “Oil Ancestors,” an immersive virtual performance on the cultural history of oil in Florida.

Maya Billig — “A Lot,” an interactive drive-in dance performance that aims to physicalize the experience of regaining momentum after being “parked” in place for a period of time.

Natasha Tsakos — “CARABOOM,” an immersive theatrical experience that aims to elicit human connection while people remain in their vehicles.

Najja Moon — “The Huddle is a Prayer Circle,” an immersive installation and
interactive performance focused on sound, visual art, scripture and movement.

Octavia Yearwood — “Life’s Interludes,” a mixtape of music and poetry plus visual components relating the experiences of queer artists “in a world where their lives feel like interludes.”

To learn more about the artists and their works, be sure to follow them on social media. For more on Knight New Work 2020, including any upcoming funding opportunities, go to Knightfoundation.org/knight-new-work-2020.