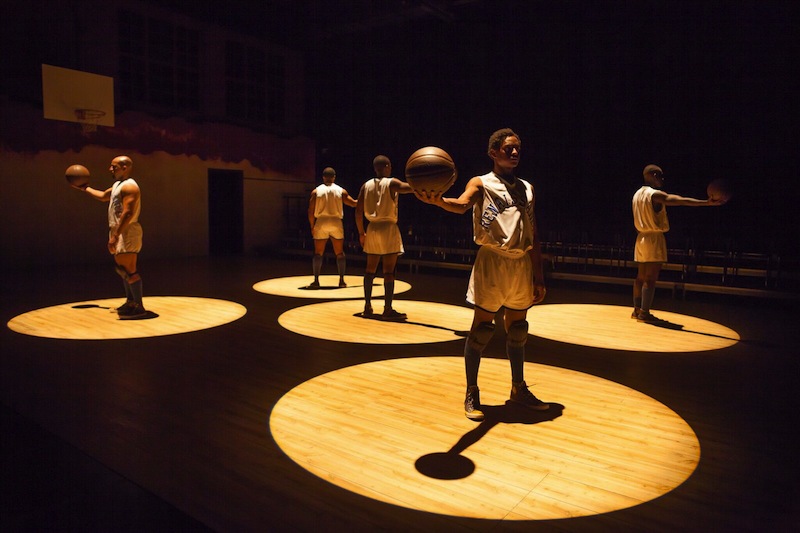 Mention the Harlem Renaissance, and those who know their history would be able to tell you a little or a lot about that vibrant period in New York’s black social and cultural life.

But bring up the New York Renaissance – also known as the Renaissance Big Five or the Rens – and you’d be likely to stump anyone who isn’t steeped in basketball lore.

Playwright and director Layon Gray shares the story of an extraordinary team in his play “Kings of Harlem,” in part because of his belief that (as he has one of his characters remark twice) “… history has the right to live.”

Now in its 46th season, Miami’s M Ensemble is presenting “Kings of Harlem” as the first production in its new home at the $5.6 million Sandrell Rivers Theater. Located in the Audrey M. Edmonson Transit Village on NW Seventh Avenue near I-95, the handsome, state-of-the art facility is also home to Fantasy Theatre Factory, which operates the theater. The main space is a flexible black-box theater, configured by M Ensemble set and lighting designer Mitchell Ost for this show to look like a basketball court, with the 124 audience members seated along the sides.

Staged with powerful simplicity by the playwright, “Kings of Harlem” uses projections of historical photos along with narration by actor Ray Lockhart to provide context and facts about the remarkable all-black pro team, which was founded several years before the better-known Harlem Globetrotters. Set during the Rens’ groundbreaking championship run in 1938-39, the play also pays homage to the team’s home in Harlem’s black-owned-and-operated Renaissance Casino and Ballroom, where dancing would follow the games.

What transforms “Kings of Harlem” from a simple history lesson into a compelling play are the scenes involving the team, the flesh-and-blood humor, conflict and inspiring story brought to life by the actors portraying the players and their determined coach.

As Edwin “Pops” Coffey, Allan Lewis is a motivator similar to any number of real-life and fictional coaches. This fine, accomplished actor conveys both discipline and warmth, as well as compassion for an angry young player whose life was shaped by unspeakable tragedy.

Marquise Rogers plays that young man, Clem Johnson, orphaned in Florida at the age of 8 when his parents were horrifically lynched in front of his eyes during the Rosewood Massacre.As the team’s veteran star Jimmy “JoJo” Robinson, André L. Gainey is a man who takes a paternal interest in Clem because of a tragedy of his own. The testy dynamic between the would-be mentor and the furious, damaged younger man is the emotional heart of “Kings of Harlem.”

The other actors, to a man, capture the distinctive qualities of their characters: Chris Boldon as the garrulous, likeable Nat Dozier; Isaac Beverly as Leroy Amos and Stevenson Jean as Dee Dee Witt, teammates at odds over a woman; Scott Wesley as the chiseled, quiet Howard Nash. Costume designer Peter A. Lovello has created a series of vintage uniforms for the performers, though their 21st century underwear (visible during quick onstage changes) doesn’t help maintain the period illusion.

Oh, and did we mention that these guys can shoot? LeBron James and Steph Curry don’t need to lose sleep, but the actors don’t miss many baskets. Gray has them do fast-paced drills and, even more memorably, rhythmically bounce basketballs in a melding of sport and dance.

Basketball legend Kareem Abdul-Jabbar explored the Rens and their legacy in his 2007 book “On the Shoulders of Giants.” “Kings of Harlem,” though more modest in scale, is both moving and enlightening – and an impressive way for M Ensemble to launch the newest chapter in its long history.