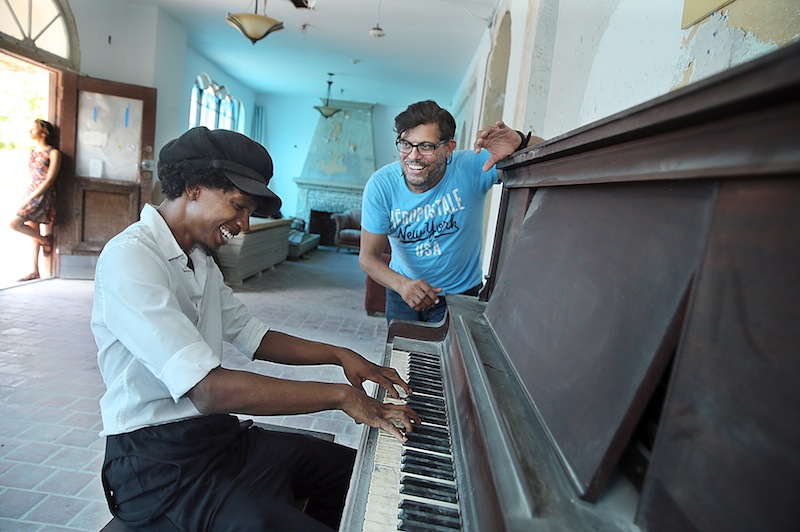 Artistic director and founder of Juggerknot Theatre Company, Tanya Bravo, had her first brush with immersive theater in New York City when she met director Tamilla Woodard. Working on the play “Broken City,” Bravo and other actors led audience members on a theatrical journey through the streets of the Lower East Side. “I was so blown away by the concept and the lines that were crossed between audience and actor,” says Bravo. “This to me felt like the future of theater.”

Bravo returned to Miami in 2011, excited to produce immersive theater in the 305.

When Juggerknot received a Knight Arts Challenge grant, Bravo enlisted playwright and Miami native Juan C. Sanchez to write “Miami Motel Stories: Little Havana,” an interactive theater piece whose subject, the Tower Hotel in Little Havana, also serves as the stage. Juggerknot partnered with developers Bill Fuller and Martin Pinilla of the Barlington Group to produce the play on-site at the hotel. When it opens for business in 2018, the Tower will be Little Havana’s first boutique hotel.

Inspired by his 2010 play “Paradise Motel,” the fictional account of a Miami motel on Calle Ocho from the 1950s to the present, Sanchez researched the Tower Hotel and wrote stories to bring the structure and its inhabitants to life. Woodard would direct.

We spoke with Bravo and Sanchez about this groundbreaking piece.

What kind of research did you do to write “Miami Motel Stories: Little Havana”? Sanchez: I researched the history of the building — it wasn’t always a hotel – and spent time at the research/archive center at the HistoryMiami Museum, looking through their collection of photographs; I spoke to historians, interviewed people connected to the building, went on several walking tours. And, of course, I read a lot of books.

You grew up in Little Havana. What surprised you about the neighborhood you know so well?

Sanchez: There’s so much that’s interesting and unexpected about Little Havana. I went further back in time with “Miami Motel Stories” than I did with “Paradise Motel.” I was fascinated to learn about the Seminole camps on the northern bank of the Miami River, the homesteaders, and the Jewish population that thrived here in the 1930s. We want to show people not only what is recognizable about the neighborhood, but also what you might not know, talk about, or see.

What was it like writing a play for an immersive theater experience as opposed to the stage?

Sanchez: Thankfully, I was paired with Director Tamilla Woodard. … We spent a lot of time figuring out the concept and asking questions like, ‘what is the building saying? What are the stories?’ It’s about understanding that the audience is always going to inform and change the play.

What will audience members experience?

Sanchez: On the first floor, each actor has been given a character, a premise and in some cases a monologue, but there will be improvisation involved. The first floor is more fluid. Audiences can come and go as they want.

The blue, pink, and yellow rooms on the second floor are designed to be an intimate experience. Audiences are allowed to enter each room, two people at a time. Each scene is about 12 minutes, but doesn’t include the moments that take place in the hallway when the entire audience will experience the same thing at the same time.

How did the building, constructed in 1920, influence your writing?

Sanchez: The history of the building dictated the stories on the second floor, which we call the “close-up.” It’s about the people who lived, visited, or worked there.The “wide shot” is the first floor and that’s about the neighborhood, the music, the recognizable characters.

How does “Miami Motel Stories” fit into Juggerknot’s 19-year history?

Tanya Bravo: Juggerknot’s first home was Drama 101 off of Biscayne Boulevard, in an old motel opened by Teresa Pooler. She gave us one room and we turned it into a black-box theater for several seasons. This really feels full circle – the idea that theater can truly be executed anywhere.

Gentrification is an issue in Miami. Developers are known for capitalizing on the arts to attract high-end commercial and residential investors, often pushing out or displacing the local population. Does this project differ?

Bravo: I love answering this question. Michele Antelo, our managing director, always says it right, “The Barlington boys are ‘conscious developers.’” They aren’t into erasing the history of the neighborhood; they are interested in preserving it.When we came to them with the concept of “Miami Motel Stories,” they said, “We have the perfect building for you.” They sat with us for over an hour with huge smiles on their faces, giving us details about the history of the Tower Hotel and everyone who had lived and passed through it. It gives me goosebumps every time I think about it. They were so excited to tell these stories and we are so honored that they have allowed us to do so.

Nightcap: access to first and second floors and live music after the show.

Tickets at completeticketsolutions.com; 877 504 8499; http://www.juggerknottheatrecompany.com. Ticket holders must arrive 15 minutes before show time or tickets will be released. Must be 15 years or older to attend.