Joseph Papp gets a theatrical tribute at GableStage

The incomparable theatrical impresario Joseph Papp has been memorialized in different ways since his death in 1991 at the age of 70. Among the most notable: Helen Epstein’s hefty 1994 biography “Joe Papp: An American Life,” and the 2010 documentary “Joe Papp in Five Acts.”

Now, three decades after his passing, Papp and his legacy have become the subjects of an almost-solo show, “Joe Papp at the Ballroom.”

Debuting at GableStage through Dec. 31, the world premiere piece is the work of three adaptors: actor Avi Hoffman, director Eleanor Reissa and playwright Susan Papp-Lippman, eldest of Papp’s children. The show’s creators are listed that way because the text and song selection are largely drawn from several Manhattan concert appearances by Papp in 1978 at a SoHo venue called The Ballroom.

In other words – in his words, in the songs he chose – “Joe Papp at the Ballroom” conveys the hugely influential producer’s perspective on his life 13 years before his death.

Hoffman’s aim in co-creating and starring in the show is to remind audiences of the extraordinarily impactful role Papp played in the history of 20th century American theater. And given the ever-more-fleeting nature of collective memory, that’s a good thing.

Papp was, after all, the creator of the New York Shakespeare Festival, whose mission was presenting William Shakespeare’s plays for free. He prevailed over the mighty New York Parks Commissioner Robert Moses, who demanded he charge admission to the shows in Central Park; as Papp put it, “David beat Goliath.”

The producer turned the former Astor Library into the Public Theater, a not-for-profit institution with seven stages, where cutting-edge, diverse work could be developed and premiered. Papp gave work to and influenced several generations of artists – actors, playwrights, composers, designers – and he found a way to help sustain the Public by giving shows like “Hair” and “A Chorus Line” to commercial Broadway runs. 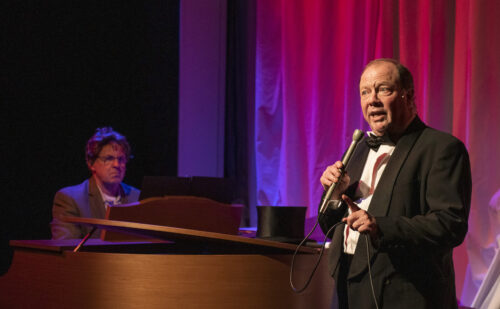 “Joe Papp at the Ballroom” explores the Brooklyn-born producer’s Yiddish roots (he was born Joseph Papirofsky), the poor but abundantly loving early family life with his Eastern European immigrant parents, his World War II crash course in showbiz (with young sailor and future legend Bob Fosse) putting on shows for the Navy in the South Pacific. Papp, the fighter who refused to name names before the House Un-American Activities Committee, also gets his due. And his own failings as a four-time husband and father of five also get fleeting acknowledgement.

That’s a lot of information to pack into a play-with-music, with a running time of around 80 minutes.

New play development is vital yet inevitably challenging. “Joe Papp at the Ballroom” is, at present, a piece with both potential and problems.

Structurally, it’s bifurcated. In the first part, Hoffman is dressed formally (top hat included) as he performs part of Papp’s Ballroom show in front of a filmy curtain, his pianist-music director Phil Hinton off to one side. In the second, he’s in Papp’s impressive office at the Public, dressed more casually, briefly puffing on a cigar as he ruminates on and evaluates his life.

Hoffman knew and worked with Papp, and his Yiddish background is every bit as strong as the producer’s. He understands Papp’s world on multiple levels.

But despite some moving moments – his lovely version of Irving Berlin’s “A Russian Lullaby,” his thought-provoking rendition of “Brother, Can You Spare a Dime?” come to mind – he comes across more as the engaging song-and-dance man of his own “Too Jewish” shows than the fierce, transformative producer. Director Reissa could push him harder on that front.

To work more powerfully as a theatrical portrait, the script could use a rewrite. Better integrating both parts of the show would help, as would deepening the look back at Papp’s accomplishments to more compellingly explore what made him tick. At present, the British-born Hinton (who sports a truly bad wig) delivers a few lines, most designed to spur Papp’s memory. His delivery is fine, but the device works better in a concert than a play.

The show’s three adaptors are not, of course, the only collaborators involved in “Joe Papp at the Ballroom.” GableStage is presenting the world premiere, as the program states it, “in alliance with” the Hoffman-founded not-for-profit Yiddishkayt Initiative.

Set designer Lauren Helpern necessarily pushes the action downstage for the Ballroom concert sequence, with those filmy white curtains taking on meaningful colors (green when Papp sings a lyric about money, for instance) thanks to Tony Galaska’s lighting design. Her truly impressive work appears when the curtain parts to reveal Papp’s office, its famous Paul Davis posters on the walls, a vintage radiator and architectural details conveying the sense of an historic space. 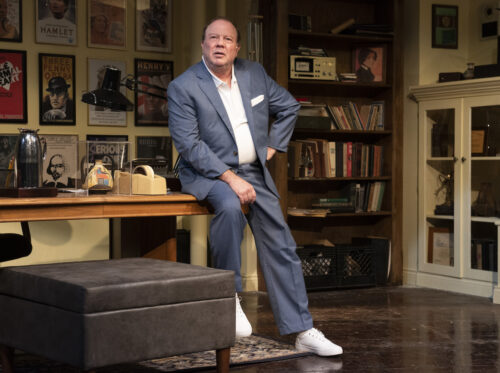 Without doubt, Joseph Papp, the man behind so many significant pieces of theater in the latter half of the 20th century, deserves a show of his own. “Joe Papp at the Ballroom” has some promise, but its developmental process needs to continue.