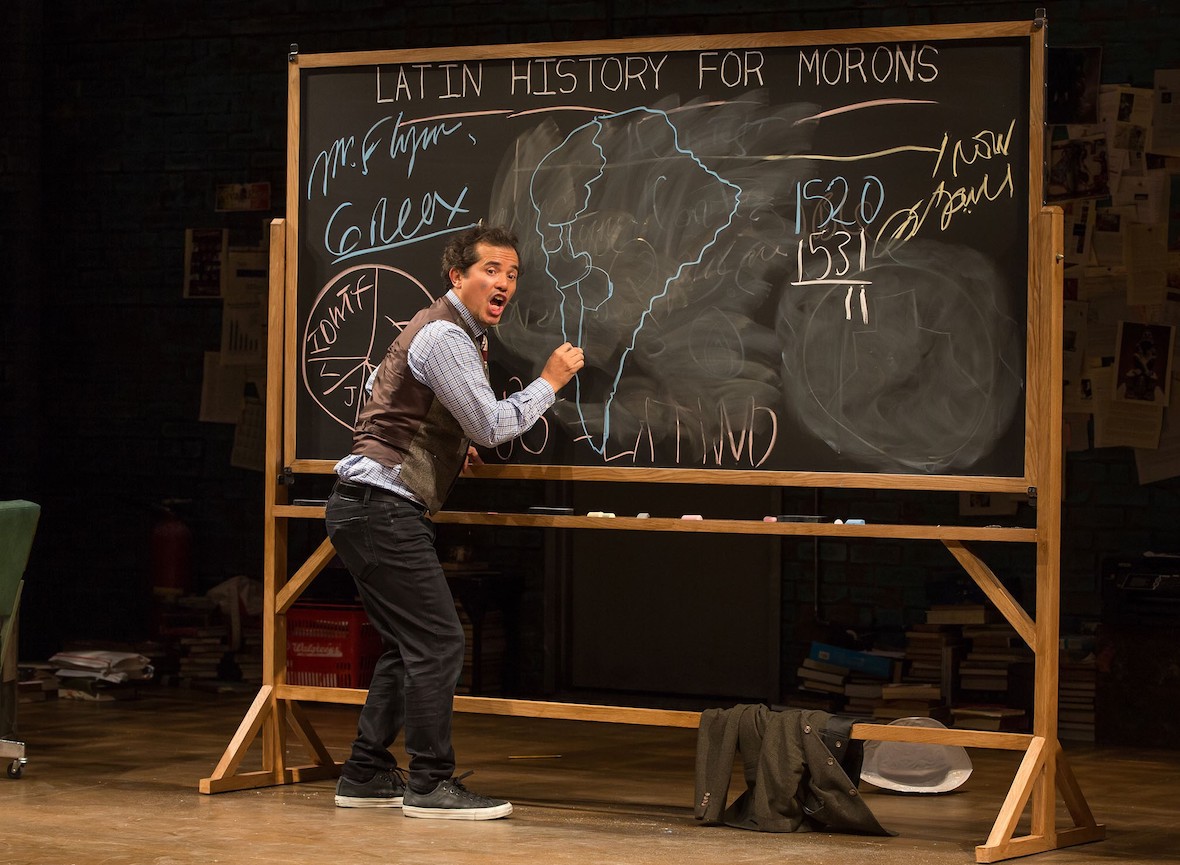 John Leguizamo is a man whose talents are eclectic and seemingly limitless. The Colombia-born, Queens-raised artist is an actor, director, playwright, comedian, author and master of the solo show.

Observant, thought-provoking and often hilarious, those one-man shows began with the Obie Award-winning “Mambo Mouth” in 1991. Leguizamo followed up with “Spic-O-Rama” (1993), “Freak” (1998), “Sexaholix … A Love Story” (2002), “Ghetto Klown” (2011) and “Latin History for Morons” (2017). That last show, which he’ll perform July 12-14 at the Adrienne Arsht Center for the Performing Arts, was nominated for the 2018 best play Tony Award, and Leguizamo was honored with a special Tony for three decades of bringing diverse stories and audiences to Broadway.

Director and star of the upcoming film “Critical Thinking,” which chronicles the 1998 triumph of Miami Jackson Senior High School’s chess team in becoming the first urban team to win the U.S. National Chess Championship, Leguizamo, 54, has had an extensive and stylistically diverse movie career, including roles in “Super Mario Brothers,” “Carlito’s Way,” “Romeo + Juliet,” “Spawn,” “Summer of Sam,” “Moulin Rouge,” “Collateral Damage,” “Ice Age,” “Chef,” “The Crash” and many more films. His solo shows were filmed by HBO and, in the case of “Latin History for Morons,” Netflix.

Yet for all that success, Leguizamo knows only too well the ongoing challenges of forging a mainstream show-biz career as a Latino artist. “Latin History for Morons” grew out of his attempts to help his son Lucas, now a college student, on a middle-school project about heroes after the younger Leguizamo was repeatedly bullied and called a “beaner.”

Over the Fourth of July holiday weekend, Leguizamo called to talk about his show, his life and his well-researched belief that a multitude of Latino heroes played a huge role in shaping this country.

I know that your attempts to help your son when he was being bullied in middle school inspired “Latin History for Morons.” How did you go about doing your research on the ways Latinos contributed to this country’s history?

I started first to try to weaponize this information, to get facts; to say this Latin hero did this, this one did that. I started with our empires, started giving him everything we contributed to the whole world: chocolate, potatoes, tomatoes, corn, anesthesia, brain surgery, barbecue. The Incas had a binary code that predated computers. They had socialism that worked for the whole empire.

Then, I lucked into these other books. I talked to some Latin history professors, and they told me, “Read Howard Zinn’s ‘A People’s History of the United States.’ ” You read that, look at his research, you find more research. And you discover all these amazing things about Latin people. We’re the oldest ethnic group in America, after Native Americans. We fought in every single war. We’re the most decorated minority in every war.

I took you too deep into the rabbit hole, but I did deductive reasoning to try to get there.

Do you feel sometimes when you’re working on pieces that it’s like doing a grad-school course for yourself?

Yeah, this definitely was a master’s, and if I’d gone a little further, it would be a Ph.D. 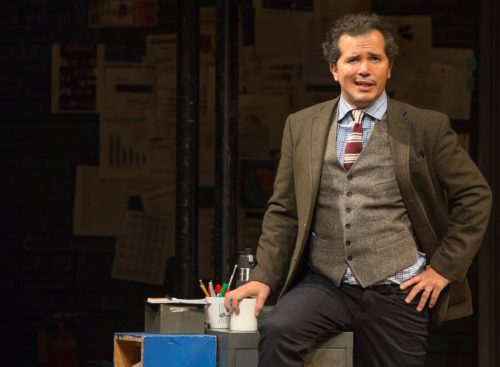 How long did it take you to develop this show, and how did you go about balancing the mixture of facts, entertainment and very understandable outrage?

It was a trial-and-error process. … My shows take four to five years to workshop. I started out really gung ho about the history and thought, “People are gonna love it.” I had the Vietnam War, the War of 1812 that nobody even cares about. I had Simón Bolívar. I had so many historic figures and sketches and funny stuff. But people were not groovin’ with me. I was like, “What? C’mon, man.”

I had to find the balance. So I started reducing the history. Then, I reduced it too much. I didn’t like the show so much. It seemed like the right recipe was historic anecdote, then an analogous personal story of mine. That’s the way people enjoyed the history, and I was able to make it palatable to them. My real demographic is young Latinx, so how do I turn them and make them desperate for that information?

Why do you think it is that so much of Latino history in the United States is missing from textbooks?

I think the obvious reason is a power grab. Because if you’ve had people fighting alongside you … if you put these people in textbooks, you have to celebrate them and give them power. So if you exclude them, you can always take away their land, take away their power. It’s much easier to do it to people you have excluded from the creation of your country.

Why do you think so many states have Spanish names? Florida, California, Colorado, Arizona. Those are all Spanish words. Gen. Bernardo de Gálvez in the American Revolutionary War gave … weapons [and ammunition to aid] George Washington, plus 3,000 soldiers who were Puerto Rican, Cuban, Mexican, Native American and slaves. And they kicked the British out of Texas, Louisiana and the Florida Panhandle. Without that effort, America [might] still be a British colony. So how can you not give credit to that? What is the purpose of excluding that contribution?

One of the things you mention in the show is the daily microaggressions faced by Latino people in the United States. Can you talk about that, then talk about this macroaggression that is President Trump’s immigration policy toward Mexico and Central America?

And Puerto Rico. And the harsh sanctions on Cuba. It’s toward every Latin person.

As a Latinx person, you deal with a lot of microaggressions daily. Just me going to pitch stuff to studio heads. I get things like with “Critical Thinking,” this movie I just directed about Latin kids who became 1998 chess champions from Overtown. I would pitch it, and they’d say, “Oh, Latin people don’t want to see feel-good movies.” Does that mean we only want to see depressing movies? I really doubt that.

Other times, I’ve been told by studio heads that Latin people don’t want to see Latin people. There’s all this crazy Hollywood “wisdom” that is really microaggressions that I gotta deal with on a daily basis. You go, “Why is there no Latin content?” Well, they’re killing it at the root, at the creation of it. That’s just me in the business.

That’s why I do theater. That’s why I do comedy clubs, I do movies, I do TV, I do it all. I write, I produce, I direct. Because as a Latino person, as an immigrant, you have to be five times better than the regular white person to succeed. 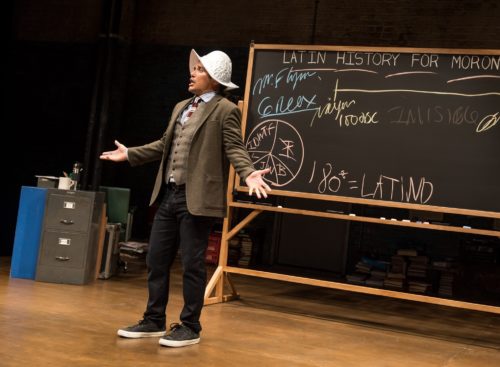 You made your TV acting debut on “Miami Vice” when you were 19. I know you directed and starred in “Critical Thinking” here. How often have you worked in the Miami area, and what do you feel about the city’s diverse majority Latino population?

Oh, my God, I love going to Miami. I just feel so at home. There’s a sense of pride when you go to every establishment and the owners are Latin, and the people running the place are Latin, and people in power are Latin. It’s such a different experience than going to Los Angeles, where you feel like you’re in an apartheid state. Where all the Latin people are just serving everybody else and they’re living in a ghetto situation, and they’re allowed in the gated communities only as servants. But when I go to Miami, it’s like, “Yes. That’s the world as I believe it can be.”

Our population is so diverse: Cuban, Colombian, Argentine, Venezuelan, Nicaraguan, Peruvian, Brazilian and more. Do you feel like the Arsht Center audience is going to get this on a deeper level than the average audience?

Oh, absolutely. It’s like being home. What I’ve found is that the level of emotions I felt during the research and during the experience of the bullying, it’s amazing how Latin people feel all those emotions that I felt. You feel so proud of everything we’ve accomplished. You feel shocked that this information was kept from you. Then, you feel outraged that it’s not in textbooks. You’re depressed by the end of these beautiful empires. You begin to understand the uphill battle that Latin people have had. … .So you leave the show feeling the way I felt. It’s wild. I didn’t know how to process all those emotions. The only thing I hope they walk away with is that information can be weaponized. That’s hopefully the gift that I can give back.

Do you feel like working on this show transformed the way you’re going to do future shows?

Actually, it did. First of all, the show is so empowering to me. Especially when I hear 13-year-old kids going, “Why was this kept from me, man?” I want to do these informative shows, shows that elevate not only comically but also elevate us historically and intellectually. That’s really exciting to me.

There is an immigrant-detention camp here in Homestead. Do you hope your show will also help spur people to figure out more powerful ways to demand the end of holding families and children in camps?

It’s horrifying to see people who were just like the Pilgrims, coming across the ocean for a better life for their kids and risking their lives for that. Then, when people of color start coming, they’re being held captive, put in cages, children separated from their parents. Kept without proper food and bedding. It’s so cruel and inhuman. It’s hard to believe that that’s our country, and that religious groups are OK with that. What happened to Christianity? It’s odd that they go, “We love our brothers and sisters, but only if they’re a certain way.” I don’t understand how they compartmentalize that.