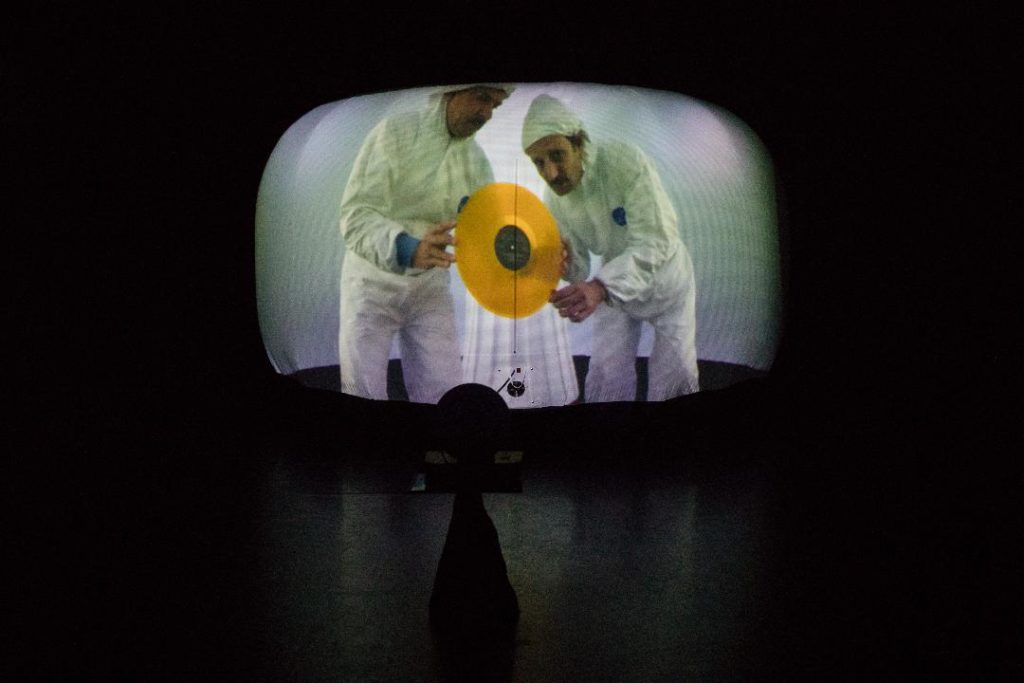 In 1977, NASA had a far-out plan to put a phonograph record titled “The Sounds of Earth” aboard a space probe and send it out into the galaxy in the hope that another life form would find it. For years, the effort has intrigued Thaddeus Phillips, a boundary-pushing playwright, director and actor.

Two 12-inch, gold-plated, copper disks, historically known as the Golden Record, are aboard two Voyager spaceships. For Phillips, the subject was ripe for exploration.

After an evolution that began two years ago at the Miami Light Project, followed by some test runs in Pittsburgh, Denver and at the New York Theater Workshop, Phillips’ theatrical odyssey “Inflatable Space” is ready for its world premiere right back where it started. The artist’s company, Lucidity Suitcase Intercontinental, and the Miami Light Project will present a performance of the show Saturday, June 8, at the Colony Theatre in Miami Beach.

After successfully mounting “A Billion Nights on Earth,” a show filled with huge inflatable objects, Phillips had an idea: Abstract inflatable shapes could convey his imagining of NASA’s Golden Record project and what might happen if and when it is discovered billions of years from now.

Although he initially envisioned a stage filled with inflatables, Phillips found that less provided more. He whittled down his inflatable set pieces to one extremely large, black-and-white dome. A smaller inflatable represents Earth with a cartoonish imagining of Big Sur.

Phillips collaborated with the Creamos Inflatable Factory, a company in Bogota, Colombia, that worked with him on inflatable sets and props for “A Billion Nights on Earth.” For nearly two years, Phillips spent time working with Creamos designers in Colombia to get the set just right for “Inflatable Spaces.”

The show begins with Phillips entering an empty stage. He carries a suitcase with a bag inside, and opens it. “I plug this thing in, and it starts inflating. And I’m trying to decipher what it is and so is the audience along with me. … It’s almost like the whole show appears out of nowhere.” 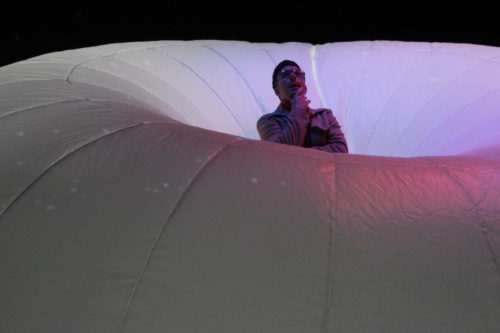 Of course, the set includes the Golden Record — a facsimile, of course — on a turntable. Phillips says it is introduced squarely in front of the audience, downstage center, to emphasize its importance.

“We light it with a little bit of smoke surrounding it, and it almost appears as this weird planet itself floating in the blackness of the theater,” he says. But it doesn’t stay in one place for long. “We use it as a prop throughout the show.”

Phillips plays a version of himself as he tries to figure out the interstellar and earthbound puzzle that unfolds around him. “That allows me to be a neutral vehicle to ask questions to the scientist character [played by actor Ean Sheehy],” he says.

The show is mostly free of dialogue, with some conversation between Phillips and Sheehy. Colombian composer Juan Gabriel Turbay provides original music, along with samples and pieces from the Golden Record. The real out-in-space LPs are packed with needles and cartridges along with instructions on how to play them. Voyagers 1 and 2 each contain the same record, which consists of 115 photos from Earth, a selection of natural sounds such as wind, rain and crashing waves, and animal noises from a chimpanzee, birds, a hyena and an elephant, among others. Spoken greetings are delivered in 55 languages, and music from various cultures and eras is featured. Contemporary music is represented by Chuck Berry’s “Johnny B. Goode.” The contents were selected by a NASA committee chaired by late astronomer Carl Sagan.

For the starting-off point of the story, Phillips draws from his experience researching the Golden Record. He recalls wanting to visit NASA’S Jet Propulsion Laboratory in California, where the locations of the Voyagers and the time-capsule records are monitored. He called several people he knew that he thought could get him entry, but none of his contacts panned out.

“One day, I just phoned the lab directly and asked for Steve Howard, one of the guys who monitors the probe,” Phillips says.

Howard, an engineer and JPL flight-team member, keeps tabs on the Voyagers and, in turn, the Golden Records that each craft carries. “So, then, Howard picks up the phone,” Phillips recalls. “I say to him, ‘Are you the guy that monitors Voyager, and he says, ‘Yep.’ ”

The conversation propels the plot of “Inflatable Space,” including Howard’s telling Phillips an astonishing fact: “They think in 2027, 50 years after they’ve launched the Voyagers, that they will lose contact with them.”

Phillips admits that some audience members may not be aware of the Golden Record project.

“Early in the piece, we re-create the weird press conference that NASA gave about Voyager at Frank Wolfe’s Beachside Motel in Cocoa Beach, right near the launch site,” he says. “And there’s polka music playing because there was a wedding happening at the same time next door.”

The giant, doughnut-shaped dome also helps to fill in the blanks. “The inflatable accomplishes so many things,” Phillips says. Cinematic sequences by Los Angeles-based video artist Spencer Sheridan and still images are projected onto it, and the show features, Phillips explains, “hyper-real conversations, where everything links together through the existence of this inflatable to create the show.”

In August, the piece will play Scotland’s Edinburgh Festival Fringe, and Phillips says it’s already been booked for a performance museum in New Jersey and next summer will go to Hong Kong for a run.

“A simple journey on a cosmic road, accompanied by the music from the Voyager Golden Record. The idea and concept have generated a lot of interest,” Phillips says.