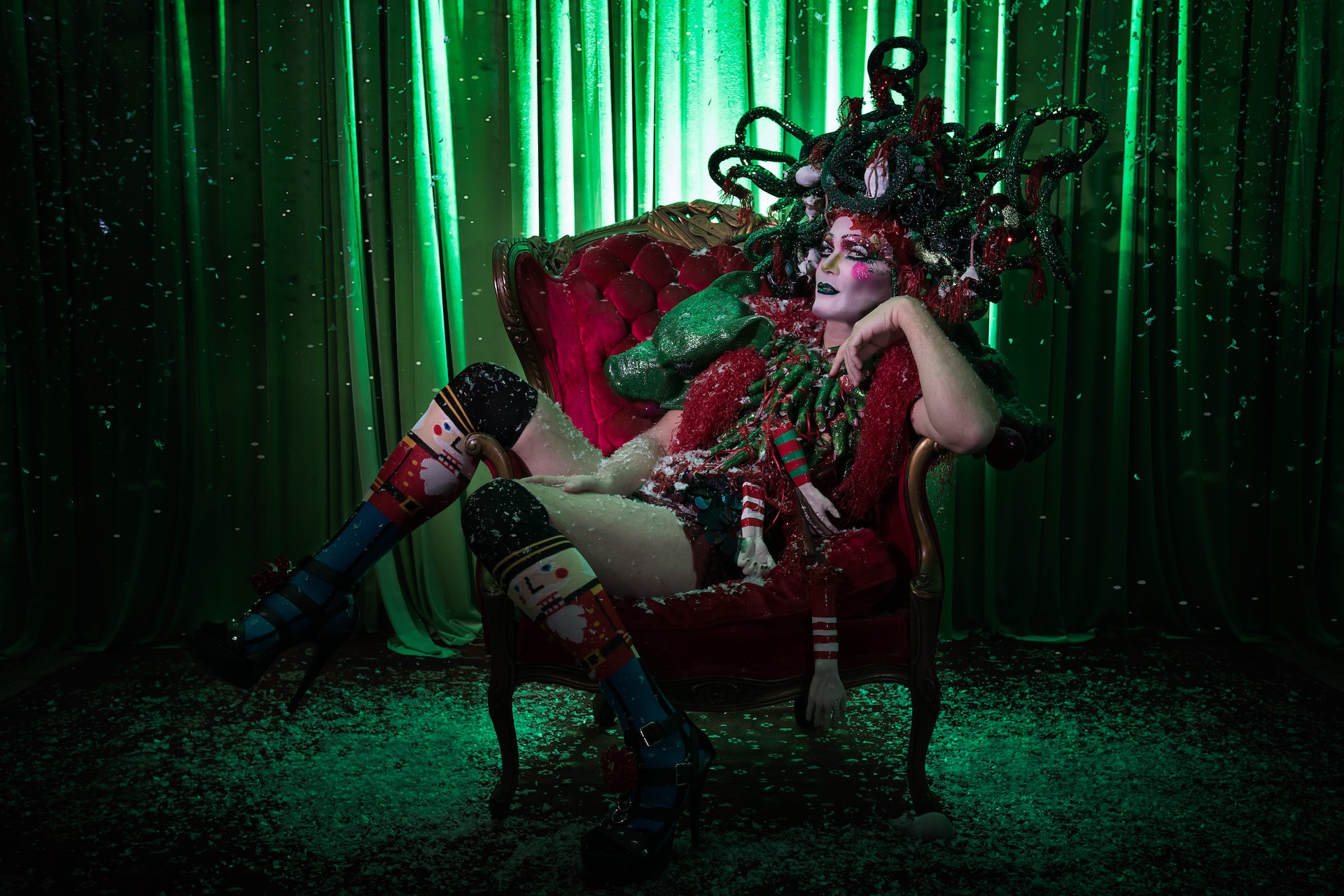 In a year when everything is changed, our holiday traditions are no exception. How will we manage family gatherings? Gift giving? Feeling hopeful and connected?

Just in time for this upended season comes Taylor Mac, the brilliant gender-bending theater artist, with “Holiday Sauce … Pandemic!,” a virtual vaudeville that blends music, film, burlesque and “random acts of fabulousness,” and pays tribute to the families we choose and the transformative power of imagination.

“Drag mentors and queens and single mothers and those who have children without the help of men, like the Virgin Mary,” says Mac. “We decided to treat the audience like Santa Claus. Our show is milk and cookies.”

The show debuts online Saturday, Dec. 12, hosted by 17 arts groups across Europe and the United States, including Miami Dade College’s Live Arts Miami. After the free screening, the show will be available online until Jan. 3, for a minimum $10 donation that will benefit a new Miami Dade College scholarship fund for the lesbian, gay, bisexual, transgender, and queer or questioning community, as well as the show’s performers.

“I can’t think of any better artist to help us process this year than Taylor Mac,” says Kathryn Garcia, executive director of LAM. “Nothing replaces the magic and energy of a live theatrical experience, but it’s been a year of reinvention. We knew Taylor Mac would capitalize on that and make something fabulous…

“There’s still a lot of beauty and creative energy being shared online. And you gotta take it where you can get it.”

“Holiday Sauce” honors Mac’s gay and artistic mentor, Mother Flawless Sabrina, a pioneering drag performer who mentored generations of young gay men and artists for a half-century. Mac found her in the early 2000s, after years of struggling to make it as a conventional theater actor in New York City.

“I couldn’t even get into an audition room, much less a rehearsal room,” Mac says.

With Mother Flawless Sabrina, Mac found the kind of exuberantly creative gay community that had been decimated by AIDS in the ’80s and early ’90s.

“She came into my life at the right time, as she did for so many young people and artists. She had an apartment that was a haven for pure creativity. She invited everyone to these parties – it was pure bohemia, what I had longed for,” Mac says. “She gave me some tough love in terms of owning my own agency, in terms of what I wanted to do. She said, ‘The universe only commits to you if you commit to yourself.’ Sometimes it takes an old queen to tell you the truth.”

Mac focused on writing and performing an extravagantly original style of theater, blending wittily profound cultural satire and commentary, live music, and costumes and sets, by collaborator Machine Dazzle, that are a wild blend of drag queen glitz and psychedelic art object. Numerous accolades include a MacArthur “Genius Grant,” a Pulitzer Prize finalist citation, and the 2020 International Ibsen Award, known as the Nobel Prize of theater. (Mac performed in Miami in 2010 and 2013, in FUNDarte’s Out in the Tropics festival.)

“I hated December,” says Mac, who grew up in suburban Stockton, Calif. “The guilt of not participating with my family, or the guilt if you do of navigating heteronormative and religious space, the capitalism of the season. And I thought, ‘Taylor, you could have a month you despise, or you could change it.’”

The title invokes Mother Flawless Sabrina’s motto: “You’re the boss, apple sauce – you’re in charge of your own lives.”

Mac determined to honor the families that outsiders, particularly those who are LGBTQ, create with friends and kindred spirits, and the elders and metaphorical mothers in these communities.

Ferrer was a founding member of SAVE Dade and an early volunteer – and then executive director – of Pridelines, which offers counseling and support for LGBTQ teens. These days, Ferrer, 62, leads the HIV prevention program for men at the Florida Department of Health.

HIV-positive since age 21, Ferrer says the COVID-19 pandemic is reminiscent of the early days of that other deadly virus.

“We were all shell-shocked trying to figure out what is this new disease, how do we protect each other,” Ferrer says. “A lot of us old-timers use the hashtag #notmyfirstpandemic. We’ve been through this before.”

Ferrer expressed being humbled, and startled, about the honor: “It’s a little disconcerting. It is very nice to finally be recognized. I have always enjoyed this type of work and been committed to it for many years. Especially as we grow older, in the queer community, you begin to feel you’re invisible and no longer relevant. I’m glad to be able to continue to make a contribution.”

Giving and community building are built into “Holiday Sauce.” LAM’s presentation prompted the Miami Dade College Foundation to create an endowed scholarship for LGBTQ students at the college, with fundraising that will continue after the event. Some of the proceeds from sales of a “Holiday Sauce” album will go toward the LGBTQ Asylum Task Force, a group advocating for LGBTQ asylum seekers.

Miami drag diva Karla Croqueta, an MDC alum, will host a virtual after-party on Dec. 12 that will feature legendary Miami drag queen Adora. It is included as part of the performance.

“There’s a beautiful convergence of things that have come together around this show, inspired by Taylor’s idea of giving,” says Garcia, adding that virtual tickets to “Holiday Sauce” make a fabulous holiday gift.

“It’s a grand experiment,” Mac says. “I see it as joining a big giant collaborative, with everyone trying to make virtual shows and survive in this pandemic.”

Mac was struck by how “Silent Night,” which they recorded live, resonates now.

“We’re trying to find grace and beauty in the darkness of these times,” Mac says. “‘Silent Night’ is a wake in some ways, but a joyful one. I think it’s the best ‘Silent Night’ ever heard.”

WHERE: liveartsmiami.org; a Zoom link will be emailed to guests after RSVP.

COST: Free with RSVP (after-party included); but after Dec. 12, there is a minimum $10 donation fee to stream the show until Jan. 3.