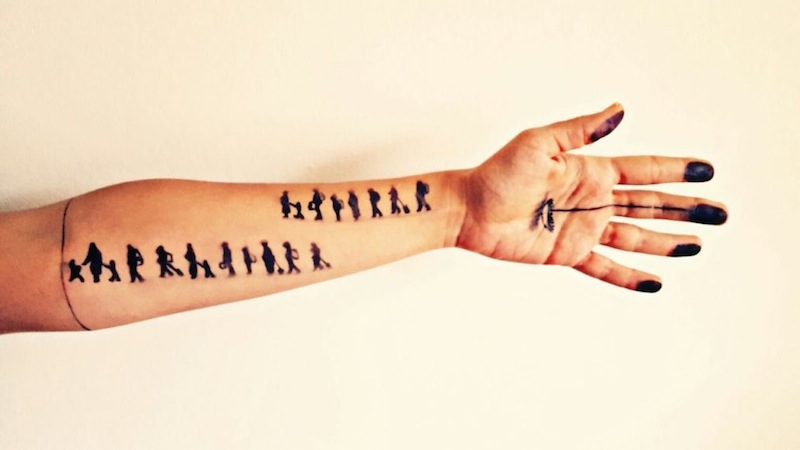 One of the centerpieces of this year’s Art Week is not a static art work, and it is also one of the most sensuous and disorienting.

Lebanese performance artist Tania El Khoury is producing her “Gardens Speak” for the week, courtesy of MDC Live Arts, a piece that has been applauded in cultural capitals throughout Europe and the United States. “It is a work,” she says, “that can only come alive with an audience.” She is asking her audience to listen to the voices of the dead. And not just hear them, but to lie on the graves of them, and literally dig through dirt to be able to listen more carefully.

These stories came from the apocalypse that is Syria today, but El Khoury understands that destruction on this scale is largely incomprehensible. So she has chosen to tell the stories of ordinary folks – 10 of them — caught up in the brutal war.

Still, how to make even these few stories sufficiently tell the tales?

In Syria, burial itself has become politicized. Before a body can be interred in a cemetery, families may be asked to sign a paper stating that state security forces had nothing to do with the death. Often this is blatantly untrue. In acts of resistance, families began burying their lost ones in back-yard gardens.

It was witnessing this first-hand that inspired El Khoury to create “Gardens Speak.”

And so, in what is a polar opposite from the glam world of Art Basel, the audience enters a darkened anteroom at the Gleason in the Fillmore on South Beach. You are accompanied by no more than 10 others. Off to the side is a rack with hooded rain gear. Put on a cloak, then sit on a rough wooden bench. A basket will be passed around. Choose a card from it. This is the woman/man whose story you will hear.

Go further into the dark; in the center of this second room are 10 modest grave-stones. You are asked now to seek the one whose name you hold in your hand. This alone is unsettling, but nothing like what comes next, in a “field” of loose earth.

One can read about lying on ground atop a grave, but these accounts can’t describe how cold the earth feels. As one unburies the story underneath, as one listens to a story, told as it is in the first-person, as five, ten, fifteen minutes pass, the earth seems to become increasingly cold, unrelentingly so. Finally there is grace, as the sound of something holy fills the room, a chant, a cry for mercy or perhaps the promise of it. You are able to linger in it. Then, as the penultimate step in the ritual — for sacred rites are surely what are evoked here — one is invited to leave a note in the earth for others who will come to listen as well as for the family of the dead to read.

As the audience returns to the ante-room, small basins of water have been prepared to wash feet and hands. However practical and even generous this is for festival goers, it didn’t really make this reviewer feel clean. I felt more melancholy after the performance than others who spoke of being energized for “the good fight” against authoritarianism wherever it is found.

Leaving aside the themes of her work, El Khoury’s use of embodied symbol is nothing less than a tour-de-force. It places her in the tradition of another female artist, Miami’s icon Ana Mendieta.

El Khoury has a second installation at Art Basel. This one –“As Far as My Fingertips Take Me” — is smaller, quieter and less well-known. Here you’ll be on your own. No group, however small, can support your experience. There is a small room with an oval opening in a wall, where you insert your arm. While hearing a story of a young man, a refugee, unwelcome in the U.S., you feel slight pressures on those out-stretched fingers. Then come the tiny, barely noticeable pin-pricks up and down the arm. Islamic calligraphy, one wonders? You can’t see what is happening since all this occurs on the other side of the wall. When you can see, it is a linear silhouette, one so lovely it looks at first like the designs applied to the skin at the time of a marriage in many cultures — again, it is easily washed away. Or is it? On closer inspection, the drawing is a line of refugees, some with children. The allusion to the Holocaust is unmistakable.

I found this installation both more terrible and more hopeful than “Gardens.” Perhaps because while war and Syria seem intractable, the refugee crisis does seem like something one can affect in whatever small way.

In any case, I cannot quite bring myself to wash off El Khoury’s drawing.

Where: Gleason Room at the Fillmore, 1700 Washington Ave., Miami Beach

What: “As Far as My Fingertips Take Me”