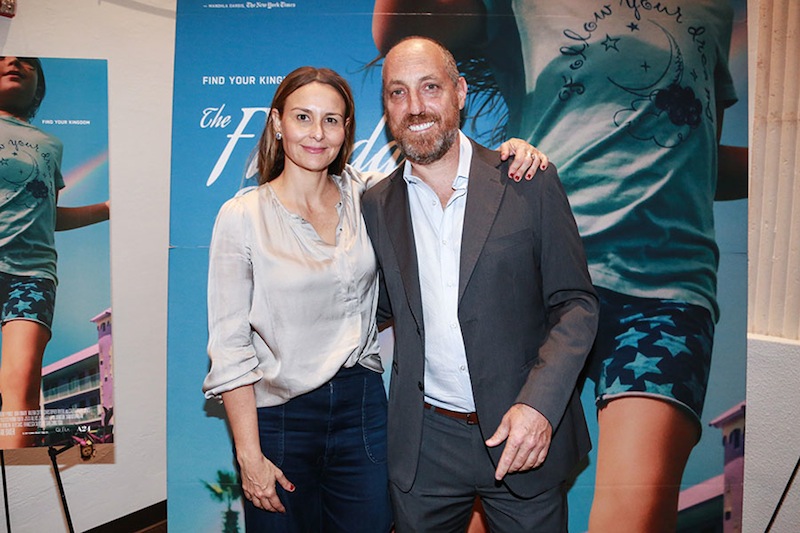 Gone are the days when filmmakers needed huge budgets, and major movie studios backing them with big bucks to get their films seen, according to two producers who spent decades in Los Angeles, and have now moved their base to Miami Beach.

“From a creative standpoint, there are amazing opportunities for filmmakers today,” says producer Kevin Chinoy, who, along with producing partner Francesca Silvestri, head up Freestyle Picture Company in Miami Beach. The pair will receive the Precious Gem Award on the closing night of the 35th Miami Film Festival at the festival’s awards night gala on Saturday, March 17.

They’ll also host a Producer’s Master Class on Thursday, March 15 at 7 p.m., at MDC’s Tower Theater Miami. “Some of what we’ll be discussing,” says Chinoy, “is how to move a project forward when you have a small budget or no budget at all.”

The producing partners are just winding down from the whirlwind of co-producing Sean Baker’s 2017 independent feature film “The Florida Project,” which won Baker the New York Film Critics Circle award, and nabbed a best supporting actor award for Willem Dafoe, who was also nominated for an Oscar.

They’ll share their experiences during the master class of what the role of producer is – “You start with an idea, or you have a writer that comes to us with an idea or script, or submits a script, and if we like the writing and the story, then we start the process,” says Silvestri.

They’ve worked three times with writer/director Baker. In addition to the recent “The Florida Project,” they co-produced two of his other films “Starlet” and “Tangerine,” which brings Chinoy back to the master class conversation.

“’Tangerine’ was shot entirely on an iPhone, and edited on our computer, and there continues to be options in that way. But how can filmmakers take those steps to make it the best that it can be, and then get it out in the world?”

Chinoy and Silvestri are masters of innovation. A film series for Glamour, Reel Moments, which the pair created with the magazine, introduced the directorial debuts of some of Hollywood’s most famous women, including Jennifer Aniston, Kirsten Dunst, Rita Wilson, Olivia Wilde, Laure Dern, Kate Hudson, and Demi Moore, among others. Two of the short films showed at the Miami Film Festival nearly a decade ago. “We created the program for Glamour back in 2005,” recalls Silvestri. “Kate’s ‘Cutlass,’ showed at the Miami Film Festival in 2008, and Demi’s ‘Streak,’ (was screened) in 2009,” says Silvestri.

Miami Film Festival director Jaie Laplante says the two are “behind the scenes heroes, who we wish to put center stage and honor as the Precious Gems they are.”

Florida natives Chinoy and Silvestri moved to Miami Beach after spending almost two decades in Los Angeles. She’s originally from Miami, and he’s from Jacksonville. “We were shooting ‘The Florida Project’ and we were spending a good amount of time here, so we decided to make this our home last January,” says Silvestri.

They want their presence to hopefully encourage others in the film industry to follow; however, television and movie production in Florida has been dying on the vine since the state decided not to replenish its film incentives program in 2016. In 2010, the Florida legislature granted $292 million in film production incentives to the state, but by 2014, all of the money was gone.

“Unfortunately, when we made ‘The Florida Project,’ it was the first year after the incentive program had been let go. That really hurt us,” recalls Silvestri, who has high hopes that money, and television and film production, will return.

One glimmer of a move forward was a bill introduced in January, Senate Bill 1606, by Senator Anette Taddeo (D-Miami) and co-introduced by Audrey Gibson (D-Jacksonville), and by the Committee on Commerce and Tourism, proposed to establish the Florida Motion Picture Capital Corporation to “encourage the use of the state as a site for scripted productions by providing financing to certain productions.”

On March 10, the Senate indefinitely postponed the bill, and it was withdrawn from consideration.

Still, the producers believe that others in their industry should give Florida a try. “Miami is a great place to live and there’s land to be able to build studios and there are locations that can’t be replicated anywhere,” says Silvestri. “We’ve been making the pitch to our colleagues to come and visit, and maybe convince them to consider what Florida has to offer.”