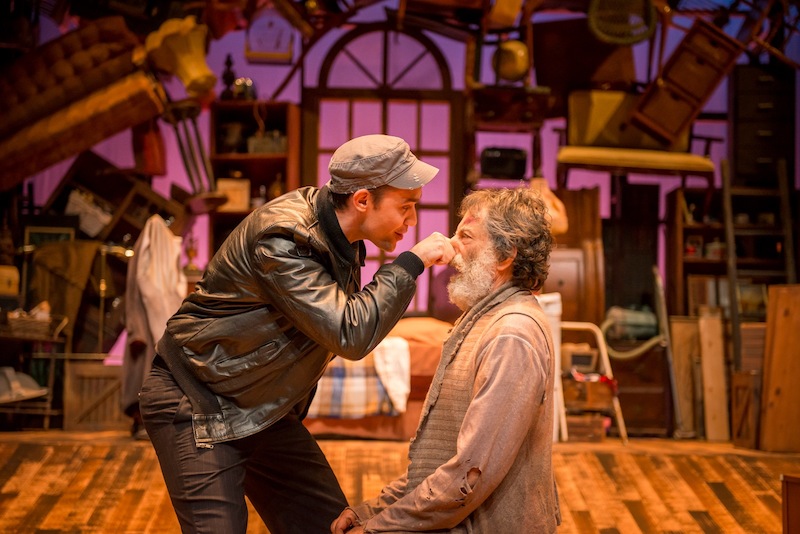 Nearly two years ago, Miami’s Zoetic Stage took its first trip into the world of Harold Pinter with an intense, superbly acted production of the Nobel laureate’s 1978 hit “Betrayal” in the Arsht Center’s Carnival Studio Theater.

Now Zoetic is delving further back into the Pinter canon with a riveting production of “The Caretaker.” This 1960 work is, like “Betrayal,” a three-character play in which silences can be as potent (and at times more revealing) as the words used to cajole, intimidate and deceive.

The two Pinter productions have several things in common: staging by artistic director Stuart Meltzer, who works the playwright’s rhythms as though he were conducting a chamber piece; chameleonic actor Nicholas Richberg, the charismatic adulterer Jerry in “Betrayal” and the damaged Aston in “The Caretaker;” and overall excellence in exploring pieces by a masterful playwright whose work isn’t often professionally produced in South Florida.

“The Caretaker” is set in a cluttered west London flat occupied by Aston (Richberg), a man who spends his days scavenging in the neighborhood and his nights thinking about a shed he plans to build out back. Although Aston goes about wearing a coat, tie, sweater vest and too-short trousers, as though he were headed to an office, something about him is off. Closed off emotionally, at times fishing for the right words, Aston is a forever-altered version of his former self. How that happened is revealed in a powerful, emotionally devastating monologue.

His opposite number is Davies (David Kwiat), a homeless man Aston has rescued from a bar fight and brought home with him. Davies, who uses the pseudonym “Bernard Jenkins” for reasons he never quite explains, is thin as a reed but outsized in every other way. Garrulous, particular in his expectations, blatantly racist, critical and calculating, Davies is also so filthy you fear you might catch something just from looking at him.

The third corner of the triangle is Aston’s brother Mick (Daniel Capote), who sneaks up on Davies while Aston is out and scares the living daylights out of the old tramp. A handyman/contractor who lives elsewhere, Mick isn’t a great deal larger than Davies, but he’s intimidating in every way – physically, verbally, emotionally. Improbably (but this is, after all, theater of the absurd), both Aston and Mick separately offer Davies a job as caretaker of the building. Mick, however, also intends for Davies to be his brother’s keeper.

Meltzer gets finely calibrated work from the three actors, who are equally adept at getting laughs (as when they take turns snatching a bag from each other, as though they were playing a reverse game of hot potato) and illuminating the play’s darker threads (those include deliberate cruelty, ingratitude, being mired in the stasis of life and the sometimes horrific treatment of those with mental problems).

Kwiat, a Carbonell Award-winning South Florida actor, gives one of the finest performances of his long career in “The Caretaker.” His Davies can turn from whimsical to demanding on a dime, and once the brothers’ patience with him has worn thin, his plaintive tone as he wails “but what about me” will make you laugh with disbelief.

In addition to his spellbinding delivery of Aston’s major monologue, Richberg makes the most of a role with many reactive moments. Watch his face when Davies weaponizes information about the most terrible thing to happen to Aston. It speaks silent volumes.

Capote’s Mick is an energized whirlwind. Whether lurking in the dark or dealing with Davies’ attempts to turn him against Aston, Capote seems about to detonate even when Mick is pretending to be amiable.

The Pinteresque world that the Zoetic team has created for “The Caretaker” embraces absurdism as well as realism.

Michael McClain has created a striking flat fit for an orderly hoarder; Aston clearly knows where everything is, but objects and furniture are piled floor to ceiling along the back wall. Rebecca Montero’s lighting suggests the chill that makes Davies crazy at night, and it bathes Aston in golden light as he shares the story of his tarnished past.Fernando Calzadilla’s costume design, particularly the ragged filthy layers in which he dresses Davies, underscore class and circumstance. Meltzer also contributes the sound design – listen to a single drop of water falling into a bucket hung from the ceiling – and layered original a capella music in collaboration with Jeni Hacker.

Along with the just-opened production of Tom Stoppard’s “Arcadia” at Palm Beach Dramaworks, South Florida theater lovers who appreciate the work of great British playwrights now have the chance for a deep dive into Pinter’s resonant, provocative world.Zoetic’s “The Caretaker” brings that world into sharp, entertaining focus.