Ground Up Rises Again With ‘Our Lady of 121st Street’ 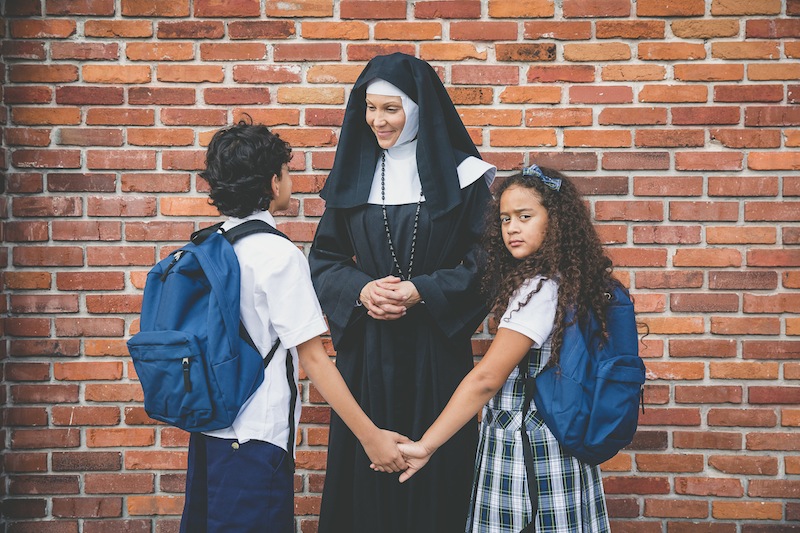 The actors in Ground Up & Rising, one of South Florida’s edgiest and most diverse theater companies, have a thing for the works of Pulitzer Prize winner Stephen Adly Guirgis.

Founded in 2005, the company launched with a sizzling production of Guirgis’ “Jesus Hopped the ‘A’ Train” featuring two of its three founders, Bechir Sylvain and Sheaun McKinney (the latter now on HBO’s “Vice Principals” and soon to have a recurring role on NBC’s new comedy “Great News”). Ground Up also staged Guirgis’ “The Last Days of Judas Iscariot” in 2009.

On Friday in its new Lab Theater digs at the South Miami-Dade Cultural Arts Center, the troupe takes on another Guirgis piece, the explosively foul, moving and funny “Our Lady of 121st Street.”

Kameshia Duncan, a Ground Up board member who has come home from Los Angeles to be one of a dozen actors in the cast, says, “When we first read the play, we weren’t ready for it. We hadn’t lived enough to do it.”

Arturo Rossi, the third Ground Up founder and its executive director, agrees: “We read this seven or eight years ago, and we were too young. But it spoke to me when I revisited it.”

First staged by the late actor-director Philip Seymour Hoffman for New York’s LAByrinth Theater Company in 2002, “Our Lady of 121st Street” features a frequently contentious collection of characters. They have gathered in Harlem for the funeral of Sister Rose, an alcoholic nun and strict disciplinarian who had a strong impact on many of their lives. One little hitch: As the play begins, someone has stolen her body right out of the casket at the Ortiz Funeral Home.

Through a series of short scenes, Guirgis introduces an array of vibrant, intriguing, recognizable characters.

Victor (Antoni Corone), an old friend who fell asleep while sitting with Sister Rose’s body after hours, has awakened to find the deceased and his pants missing. A cop named Balthazar (Carbonell Award winner Gregg Weiner), a detective forever changed by one particular tragedy, is on the case. Edwin (Curtiz Belz), responsible for his intellectually disabled and easily duped brother Pinky (Rayner Gabriel Garranchan), is nervously working on a eulogy. Rooftop (Carbonell winner Marckenson Charles), a national radio personality based in Los Angeles, dreads running into his ex-wife Inez (Duncan), having shattered and hardened her heart with his repeated infidelities.

Black businessman Flip (Keith C. Wade) has come back from Wisconsin with his white partner Gail (Christian Vandepas), an actor who is making Flip’s intention of staying in the closet as far as his old friends are concerned next to impossible. The wild and damaged Norca (Shein Mompremier) is stirring up all kinds of trouble. Father Lux (George Schiavone), disabled since his service in Korea, is trying to get Rooftop reacquainted with the power of confession. Marcia (Valentina Izarra), Sister Rose’s niece, and Sonia (Rachel Chin), witness to the volatile reunion of Inez and Norca, also get drawn into the drama.

Talking about the play during a recent rehearsal break, several of the actors and their director zero in on what makes Guirgis’ work so distinctive and powerful.

“He doesn’t sugar coat anything,” Belz says of the playwright. “But he has a beautiful way of making an outsider into a saint.”

Mompremier, who recently made her South Florida stage debut in GableStage’s “The Royale,” observes that Guirgis’ language “is so bombastic, so in-your-face raw and really undecorated. I felt I was looking at real people’s lives, people who were finally getting their stories told.”

Weiner met Guirgis at GableStage when the playwright made an appearance during that company’s production of his Broadway smash “The Motherf**ker With the Hat” featuring Rossi. (GableStage will also produce Guirgis’ Pulitzer-winning “Between Riverside and Crazy” Jan. 21-Feb. 19).

The actor says of the play and playwright, “He captures these characters that are so New York, so edgy and dark and real and jaded. When I met him, you could see his earthiness and the layered soul that he is … I think he’s one of our best playwrights.”

Adds Rossi, “He has an incredible ability to capture that gulf between who we are and who we perceive ourselves to be. These characters don’t often have the platform to get their voices heard. When we hear about a lot of these people, it’s usually on the nightly news.”

Charles, now based in New York, appreciates coming home to do what he calls “a nice urban play” that resonates with him on multiple levels. He remembers the first Ground Up show he saw, Rossi’s “September 10th,” when he was still a student at Miami’s New World School of the Arts.

“I’d never seen a play done with so little and be so effective,” he says. “It wasn’t about sets and costumes. There was some kick-ass acting going on.”

Vandepas agrees. “This is my fourth show with Ground Up & Rising, and it’s a privilege every time,” he says. “A lot of the time, people go to theater for the spectacle. Here, the acting is the spectacle.”

Rossi has led the company since its founding, keeping it fiscally solvent by limiting the number of productions per year (including no mainstage work in 2011-2012), keeping runs short (“Our Lady” will have six performances) and focusing on acting rather than flashy production values. The peripatetic troupe has performed in numerous locations throughout Miami-Dade County, a liability when it comes to building an ongoing audience. He’s hoping that the 60-seat Lab Theater space, where the now-dissolved New Theatre performed, will be that elusive ongoing home for the company’s brand of “bare-bones, powerful theater.”

Going forward, Ground Up will do one major show each year – next year’s may be the world premiere of Rossi’s set-in-Miami “Amsterdam” if everything falls into place – plus a South Florida playwrights’ festival and a festival of Miami monologues. Like several of his fellow company members, Rossi has had success in film and television, but theater is what drives him.

“We want to do theater for the rest of our lives,” he says. “It’s just a richer world.”