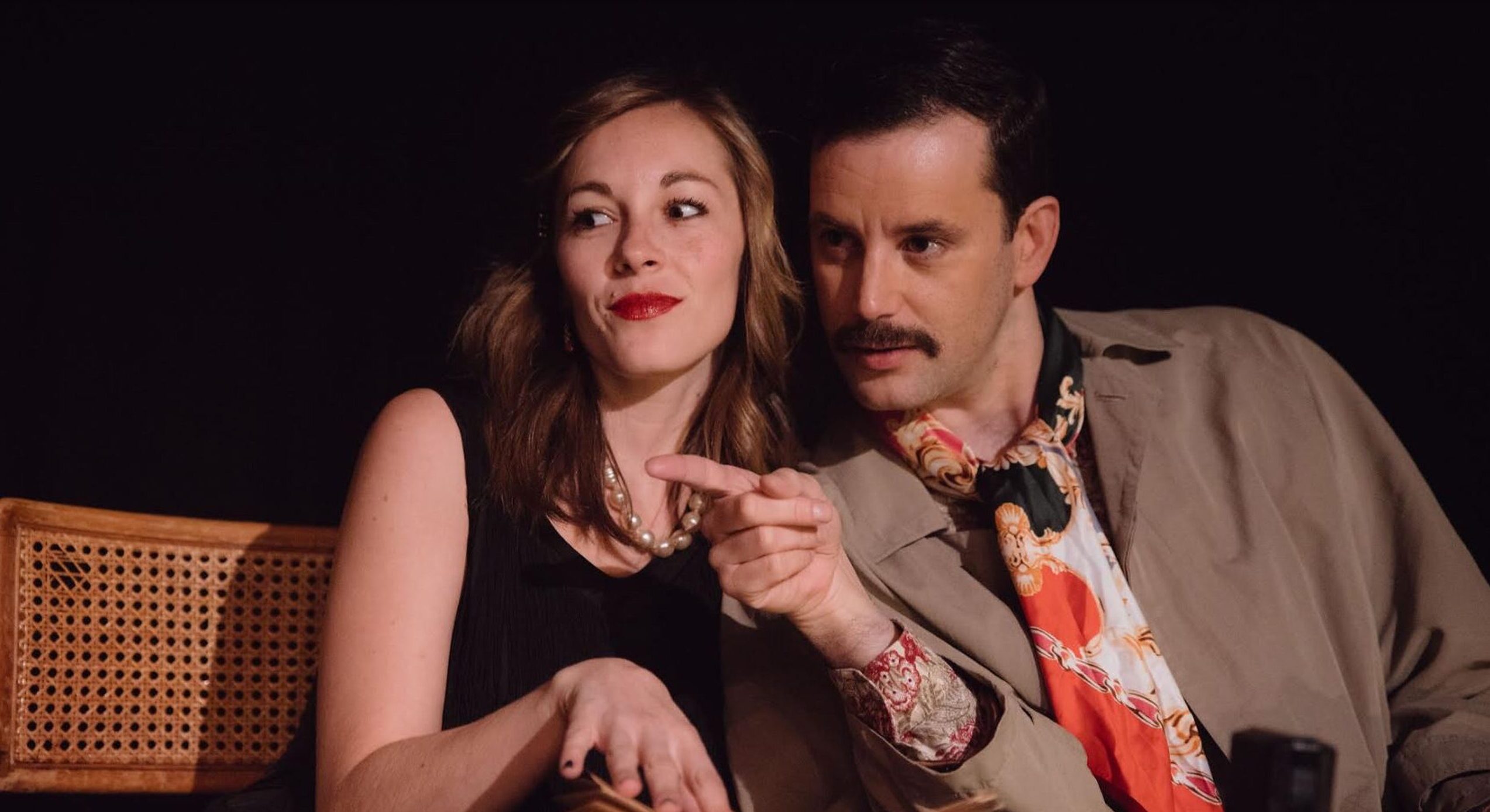 Inspired by the lives of the playwright’s grandparents, Samuel Rotter Bechar’s Spanish-language play “A Recollection After the Holocaust” plays three shows at the Colony Theatre, Miami Beach, on Saturday, Sept. 10 and Sunday, Sept. 11. (Photo courtesy of 305 PR).

“A Recollection After the Holocaust” suggests that the play’s author recreates something that took place in a Nazi concentration camp, but it’s far from that. Although the story is based on actual events, it is, in fact, a memory play — a love story that ends up being a reflection of how the present informs the past.

“We don’t feel comfortable representing the Holocaust on stage; it seems trivial to us,” says Samuel Rotter Bechar, the author, who co-directs the play with his wife, Carolina Perelman.

Featured in the cast of “Recollection,” which will be performed on Saturday, Sept. 10, and Sunday, Sept. 11, at the Colony Theatre, Miami Beach, are Sara Batuecas, Fernando Bodega, Ksenia Guinea, Ángela López Aguilar and Francisco Martínez Vélez. 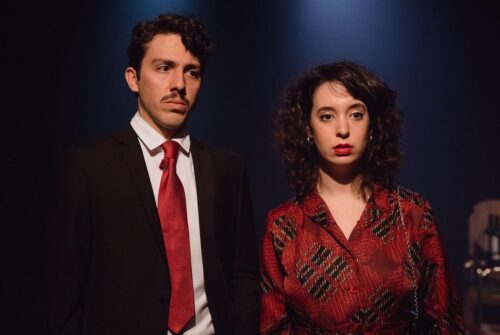 The main characters’ stories were based on the lives of  Zygmunt Rotter and Anna Rzechte, Holocaust survivors and grandparents of the author. (Photo courtesy of 305 PR)

The main characters are inspired by the author’s grandparents, Anna Rzechte (Warsaw, 1930), who, at the age of 12, escaped from the Warsaw ghetto, and Zygmunt Rotter (Krakow, 1920), one of the survivors of Schindler’s list.

“We wanted to focus on them after the war, as survivors, particularly the love that unites them,” explains Rotter Bechar, who was born in Caracas and has lived in Madrid since 2017. “And the memory of the war, the memory itself. In the beginning, we witness their first meeting and how each one understands they are survivors and have lost their entire family. We then see how the memory of that meeting evolves in my grandmother’s mind . . .” 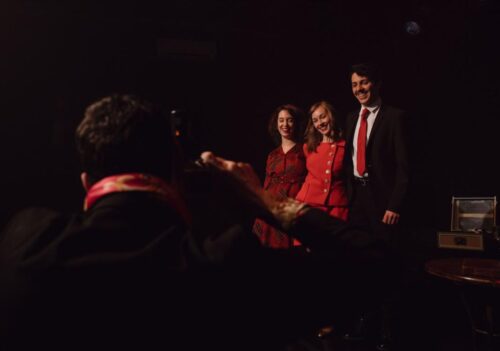 As depicted in the play, the couple meet in Paris, where she has fled after the war thanks to a Red Cross program. She was 15 years old, and while studying and working there, she met the man who would be her husband by chance. He was from Colombia, visiting the French capital on a business trip. “My grandfather decided to postpone his return until my grandmother agreed to go with him,” says the author. “Three months later, she accepted him in marriage, and they moved to Colombia together.”

The weight of memories and the need to thoroughly unravel them has much to do with the person who became the love of his grandmother’s life, explains Rotter Bechar.

As the grandson of survivors, the playwright says he has always had an interest in studying and understanding the Holocaust.

“For me, it was a highly personal historical fact because, in a certain way, it was my family’s history. However, unlike so many survivors for whom it was difficult to talk about the subject, my grandparents dedicated themselves in the last decades to tell their stories in schools and universities,” says Rotter Bechar, adding that the pair founded a chair of Holocaust studies in Venezuela. 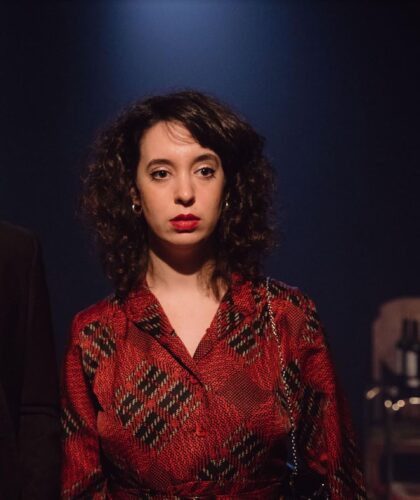 The playwright and his co-director say they gave special importance to the female characters’ perspectives. (Photo courtesy of 305 PR).

Determined to maintain that legacy, Rotter Bechar says he wanted to contribute as a writer and playwright to keep the memory of what happened alive. He also wanted to celebrate the love that united his grandparents, mainly how they supported each other to get through their difficulties and get on with life.

He explains that the play came about through a master’s degree in theater thesis that Perelman, who is now his wife, was working on.

Her teacher was the Spanish playwright Juan Antonio Mayorga Ruano, recently awarded the Princess of Asturias Prize for Letters 2022. “He has written plays about the Holocaust, and it seemed like a good opportunity for us to create one with the advice of a playwright with such a long career. So first, it was Carolina’s master’s thesis, then we presented it at the beginning of this year in Madrid. Fortunately, it received excellent reviews, encouraging us to continue investing in and improving it,” explains Rotter Bechar.

There were two fundamental reasons to make his grandmother, Anna, the protagonist, reveals the author. First, his grandfather’s story was already widely known thanks to Steven Spielberg’s film “Schindler’s List” (1993), and second, there was an importance that he and Perelman wanted to attach to the perspective of female characters.

After studying in the United States for a dual degree in literature and philosophy, Rotter Bechar moved to Madrid with Perelman. He finished his first novel, and then Perelman encouraged him to write a play, “Claridad,” which she would stage.

“It was during that montage that I realized how much I liked theater. It is a world of great passion, adrenaline, collaboration,” says the Rotter Bechar. A close friend later led him to a similar passion for cinema. As a result, he has written and directed two short films and co-produced two, which are now in the post-production process. But literature has not gone away. This year, he published his novel “Nothing Belongs to Us,” available on Amazon. 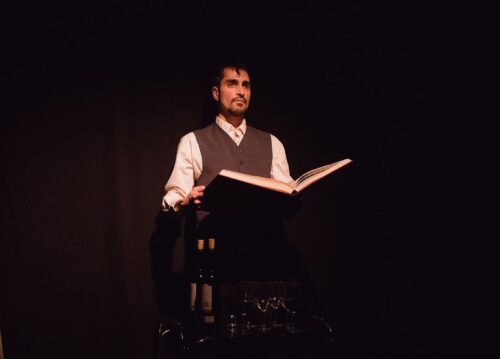 The play was well received in Spain, which was the starting point for Rotter Bechar and Perelman to engage in the process of bringing it to Miami, according to the author. (Photo courtesy of 305 PR).

“Herzog is possibly the one I identify with the most. He has been his producer, and he has carried out all his projects without waiting for someone to open the doors for him,” confesses Rotter Bechar. “I am very interested in psychology and the subconscious, the transformative art that tries to make you reflect on your existence; I have nothing against art that is merely for entertainment. On the contrary, it seems to me that it is necessary and can be extraordinary —but I am more interested in this other thing that sometimes you don’t even know how to describe very well.

WHAT: “A Recollection After the Holocaust.” (Performed only in Spanish without English supertitles)

To read this story in Spanish, click here for ArtburstMiami in Español.