GableStage Wades Back Into Musicals With ‘A Minister’s Wife’ 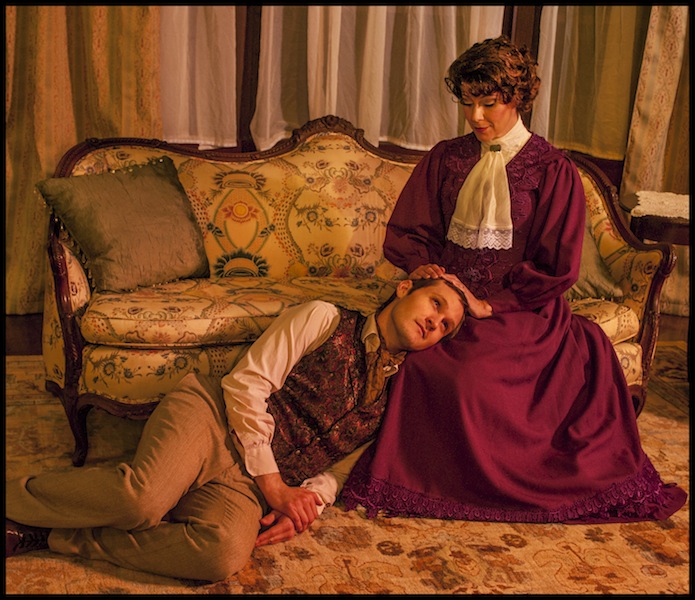 GableStage is a company known and celebrated for artistic director Joseph Adler’s skill at staging all sorts of plays.

In 18 seasons, the Biltmore Hotel-based theater has produced just two musicals: James Joyce’s The Dead in 2001-2002 and The Adding Machine in 2008-2009. Yet Adler’s directorial prowess was clear in each, with both winning the best musical Carbonell Award.

Now GableStage is wading into musical waters for a third time with A Minister’s Wife. Set in 1898 and based on the 1894 George Bernard Shaw play Candida, the chamber piece features music by Joshua Schmidt (composer of The Adding Machine), lyrics by Jan Levy Tranen and a book by playwright (and actor-director) Austin Pendleton.

Essentially the story of what a smitten young poet sees as a love triangle, A Minister’s Wife debuted in Chicago in 2009 and ran Off-Broadway at Lincoln Center in 2011. Stylistically, audiences hear the influence of the intricate complexities in Stephen Sondheim’s work, and the musical flows easily between scenes and songs. With five characters and four musicians, the piece is a perfect fit in a space as intimate as GableStage’s.

The stunning set by Lyle Baskin (adorned by Beth Fath with perfect period props) depicts the northeast London suburban home of the Rev. James Morell (Jim Ballard), a Christian Socialist minister whose radiant wife Candida (Laura Hodos) has come home for an overnight visit before returning to London. She has in tow poet Eugene Marchbanks (Christian Vandepas), a man 15 years her junior.

Morell’s adoring secretary Prosperine Garnett (Leah Sessa) and his amiable curate, the Rev. Alexander “Lexy” Mill (Shane Tanner), are also witness to some of the unexpected turns of the Morells’ reunion. Overall, though, the focus remains on Candida and the choice that the two men who love her ask her to make.

Will she stay with the dutiful but always-busy husband who says, “The harder I work, the more I live,” the man who takes her devotion to domestic life for granted? Or will she be tempted to leave with the dreamy poet who asks Candida’s husband, “Do you think her soul can survive on your metaphors, your rhetoric?”

Candida and her logic are in the driver’s seat.

As with GableStage’s earlier musicals, Adler has cast some of the region’s finest musical theater actors in A Minister’s Wife. Ballard won back-to-back Carbonell Awards in 2007 and 2008 for his performances in Urinetown at Actors’ Playhouse and The Adding Machine at GableStage. His fellow cast members are all nominees for this year’s Carbonell Awards, to be presented in a show and ceremony at the Broward Center April 4.

All have rich, powerful voices which easily fill the shallow, wide GableStage space. But whether they’re singing or speaking, what matters is their acting, which is impeccable. Tanner and Sessa provide amusing support and blend beautifully with the others on Enchantment and Into the Night. Ballard is convincing as a man consumed by work yet worried – too late? – about the cost of neglecting the emotional connections of his marriage. Vandepas, in fine voice, is a revelation, stirring empathy in a role that could otherwise come off as silly and self-involved.

Hodos, an Orlando-based actor who works frequently in South Florida, is not simply portraying the title character. She’s the heart and artistic anchor of the show. Her Candida is a 19th century woman with 21st century confidence, clarion-voiced and wiser than everyone else surrounding her. Of all the reasons to be glad GableStage is doing another musical, seeing Hodos make her company debut in A Minister’s Wife is chief among them.