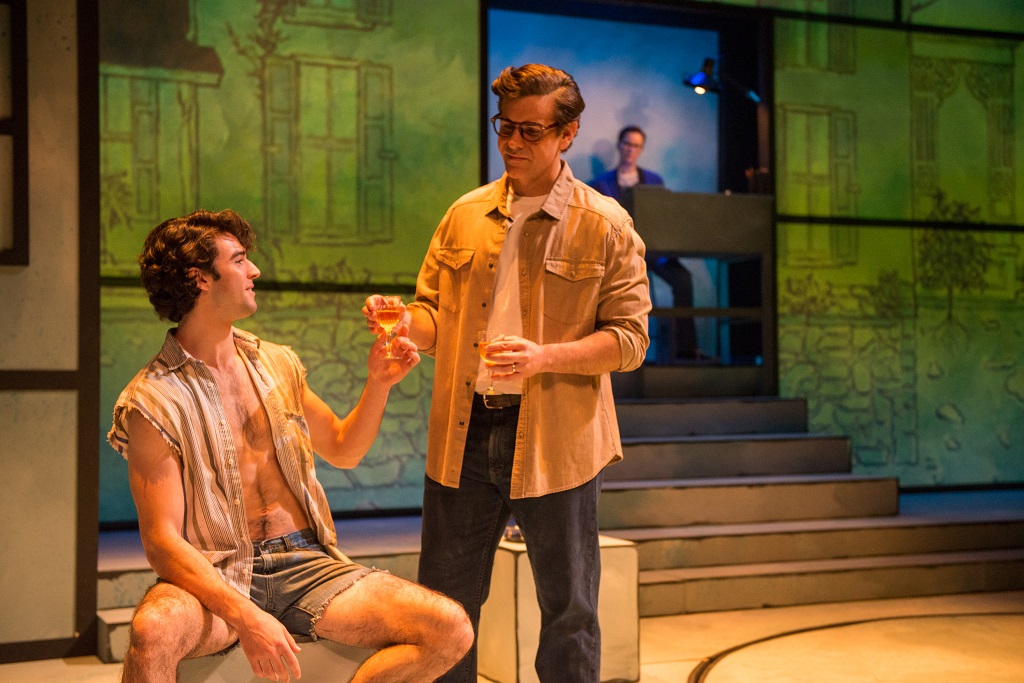 From its roots as a celebrated graphic novel memoir to its second life as a Tony Award-winning Broadway musical, “Fun Home” is an unusual, thought-provoking, touching work of art.

Now getting its regional debut in an inventively thrilling Zoetic Stage production at Miami’s Arsht Center, this look back at writer-cartoonist Alison Bechdel’s life is both amusing and deeply unsettling. The questions the piece explores are resonant and sometimes painful, one being: How do you raise children in a tempestuous marriage built on a public lie?

Book writer-lyricist Lisa Kron and composer Jeanine Tesori, who won 2015 Tonys for “Fun Home,” examine Bechdel’s childhood in the 1970s and her college coming out through the grown artist’s eyes. The character of Alison (Anna Lise Jensen) is always onstage, sometimes upstage at her drawing table observing the action, other times moving in and out of these replayed memories.

She watches as her preteen self, Small Alison (Alexa Lasanta), plays airplane with her impossibly exacting dad Bruce (Nicholas Richberg). She remembers conspiring with her brothers Christian (Nate Poses) and John (Brayden Labgold-Carroll) to concoct a peppy faux commercial for the family funeral home, which the kids call the “Fun Home” (a resounding bit of irony, that).

Grown Alison thinks about the joy of her first lesbian love affair, when 19-year-old Medium Alison (Kimmi Johnson) found and resoundingly fell for her Oberlin College classmate Joan (Hannah Benitez).  Watching, the adult artist regards her younger, giddily awkward self with a mixture of embarrassment and affection.

And throughout the examination of her past, Alison recalls the intense clashes between her father and her mother Helen (Jeni Hacker).

Bruce – part-time funeral director, high school English teacher, passionate restorer of the family’s Gothic Revival home in small-town Pennsylvania – is a gay man whose private rebellions against the straightjacket of his chosen traditional life grew increasingly risky.  Determined to shield her children from the truth, trying to ignore Bruce’s affairs with a series of handsome young men and teens (all played by the versatile Jonah Robinson), Helen has become the target of her unhappy husband’s rages, his verbal abuse, his ceaseless demands.  Particular in its details, more universal in its depiction of the impact a toxic relationship can have on kids, the Bechdel marriage is a time bomb.

That bomb went off, we learn at the top of the show, when Bruce stepped in front of a truck and was killed. The mysterious death, his daughter maintains, was likely a suicide.

Though Alison’s non-linear contemplation of her past may sound grim, Zoetic’s “Fun Home” is more often exhilarating.  Director Stuart Meltzer, his stellar design team and an impeccable cast offer up a highly creative, haunting take on Bechdel’s bittersweet memoir.

Taking its cue from the 2006 graphic novel, Zoetic’s production looks like the book come to life.

Set designer Michael McClain has supplied a simple version of the Bechdels’ home, with a trio of turntables and lots of panels to accommodate projections created by Greg Duffy and artist-playwright Michael McKeever. Drawn by McKeever in a style evoking Bechdel’s, the cartoon-like images appear and disappear. Captions – one being “I Want,” repeated again and again – help underscore a character’s desires.

Jensen, Richberg and Hacker previously starred together in Zoetic’s production of Stephen Sondheim’s challenging “Passion,” with Richberg and Jensen playing lovers, Hacker playing an obsessive woman ready to die for Richberg’s character.  The vocal demands of “Fun Home” are different, yet all three of these exquisitely talented singing actors illuminate the depths of emotion in the Kron-Tesori score.

Though Jensen had to deal with a faulty mic that kept undermining the flow of the show on opening night, her richly expressive voice and keen connection with the joys and traumas of Alison’s life make it seem as though the musical is flowing from her imagination.  “Telephone Wire,” thoughts and conversation in song as Alison and Bruce try to connect on what will prove to be their last night together, is an agonizing triumph for both actors.

Richberg, his voice a study in the detailed expression of emotion, uses a vast array of colors to paint his portrait of a tragic man.  He’s insistently seductive with the hot handyman, testy or nasty to his wife, demanding with his kids.  He falls apart in front of us, so that his final blistering number “Edges of the World” becomes a tortured nervous breakdown in song.

Hacker, who does double duty as the creator of the show’s playful choreography, turns Helen’s “Days and Days” into a heart-stopping lament for a life built on compromise and secrecy.  Incorporating a pained version of lines from the deceptively cheery earlier song “Welcome to Our House on Maple Avenue,” the song is a tortured reckoning, and Hacker’s intense performance of it is the quintessence of unforgettable musical theater.

Johnson is irresistibly endearing as she sings Medium Alison’s lovestruck “Changing My Major” after her first night with Benitez’s knowing, smart, seductive Joan. She’s also highly sympathetic as she grows increasingly agitated while waiting for her self-absorbed parents to respond to the revelation of her sexual orientation.

The kids? They’re more than alright. Lasanta, at 11 a musical theater pro who starred in Slow Burn’s “The Secret Garden” and toured nationally in “The Sound of Music,” is earnest and understandably wary emotionally as Small Alison. Her performance of “Ring of Keys,” a girl’s realization that she’s attracted to other girls, becomes a pivotal moment and is tonally spot on.

As her brothers, Poses and the exuberant Labgold-Carroll become Small Alison’s posse, relieving the intensity of their home life with that fake commercial and “Raincoat of Love,” which imagines the Bechdels as a happy singing sitcom family.

As “Fun Home” reminds us, no one’s life is simple. Love can be transformative, love denied painful. Repressing one’s truth can inflict deep collateral damage. Zoetic’s sensitive, inspired depiction of an artist coming to terms with her past lets the musical’s messages enlighten, resound and stir memories of our own.