‘¡FUÁCATA!’ a Magnificent Solo Show From a Homegrown Latina 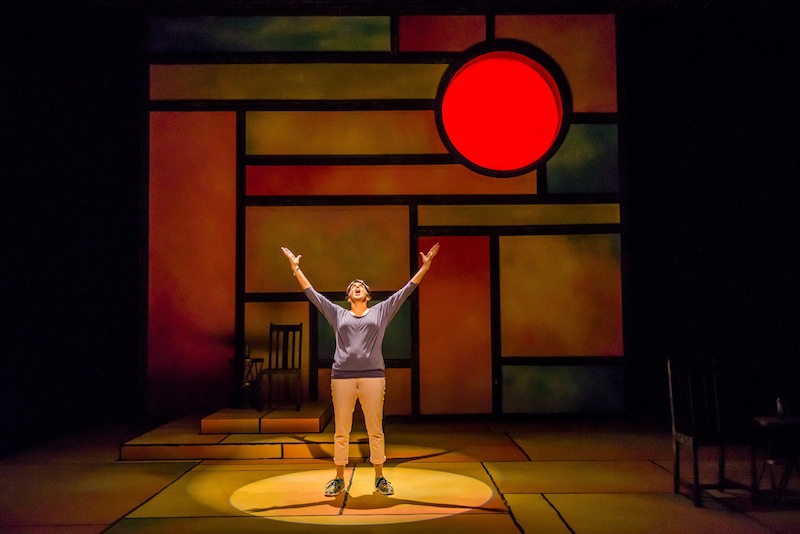 First things first. Actor-playwright Elena María García does explain the meaning of “¡FUÁCATA!” somewhere deep into the 90-minute running time of Zoetic Stage’s “García Or a Latina’s Guide to Surviving the Universe.”

The familiar Cuban term, she confides from her perch on Michael McKeever’s Mondrian-evocative set, suggests the sound of a slap. As in, “¡Fuácata! You really stepped in it that time!”

But whether you know the meaning of “¡fuácata!” or not, whether you know a great deal of Spanish or just a few words, know this: García is one of the funniest human beings ever to step on a stage.

Co-written by García and Zoetic Stage artistic director Stuart Meltzer, “¡FUÁCATA!” is getting its world premiere in the Carnival Studio Theater at Miami’s Arsht Center as part of the Theater Up Close series. It’s a piece deeply of and about mostly Latina women who live in Miami, a solo show that liberally peppers its English dialogue with Spanish-language colloquialisms and phrases. Most of that material gets restated or referenced in English, but you don’t need to know Spanish or live in Miami to find “¡FUÁCATA!” resonant and hilarious.

Playing nearly two dozen characters, García guides us through a day in the life of Elena, an event planner and working mom whose traditionalist Cuban Mami is but one of the women who complicates her life on a daily basis.

There is, Elena tells us up front, only one simple way to survive the stress of being an everyday Latina superhero, and it has four letters: café. Not coffee, but Cuban coffee, one of three daily cafecitos she dubs “liquid electricity.”Yet on this day, her preferred supplier – La Isla Café – is out. No café today. The horror!

There’s Estrella, the counter lady at La Isla Café, who fully realizes and savors her power over her caffeine-needy customers. Mami, for whom the lowest depths of degradation involves cooking anything from a box. Beatrice Goldberg, who wants to bump up the seating at her 50th wedding anniversary celebration by 40 guests over the maximum capacity of 75. Sophie, Elena’s young assistant, a gal far more focused on an exploitative search for love than on her “stressful” job.

And there’s Marisol, a young woman smuggled into the United States from Honduras. Graciela, an unintentionally hilarious Spanish performance artist (think Maureen in “Rent”). Sandy Holmes, a fiercely ambitious PTA officer whose barely concealed attitude toward the Latinas who surround her is straight from the Trump/Bannon playbook.

The script for “¡FUÁCATA!” is all it should be, blending observant humor, poignant moments and sociopolitical commentary. With occasional tweaks to the of-the-moment topical material, García should be able to perform it long beyond its Zoetic run – and she should.

The three-time Carbonell Award winner is a treasure, a performer whose work isn’t seen often enough on South Florida stages. Like Lily Tomlin, whose “Search for Signs of Intelligent Life in the Universe” is evoked by this new show’s extended title, García is a fearless and deft physical comedian, an actor with a great ear for accents and speech patterns, and a chameleon capable of bringing wildly different characters to life.

‘¡FUÁCATA! Or a Latina’s Guide to Surviving the Universe’ by Elena María García and Stuart Meltzer, Zoetic Stage production in the Carnival Studio Theater at the Arsht Center for the Performing Arts, 1300 Biscayne Blvd., Miami; 7:30 p.m. Wednesday-Saturday, 4 p.m. Sunday, through March 12. Tickets $50 and $55; 305-949-6722 or www.arshtcenter.org.